Deki hidrtna as bridge between cultures 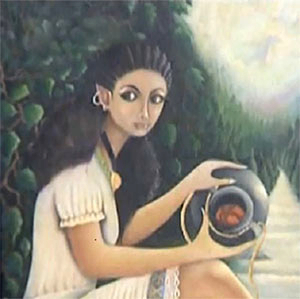 I once went to an art exhibition by a young artist named Alazar Eyob; the paintings were futuristic and based upon our culture. One of the pieces that totally dazzled me was a painting of a beautiful woman dressed in “zuria”, her black and long hair braided in a traditional way.

But what made the painting eye-catching were the woman’s features; there was something that was not quite human in her beauty especially her elf resembling pierced ear. After gazing for long I decided she was too good looking to be human and so she must be a fairy, our traditional “gual hdrtna”.

In this modern era when technology and science rule, believing in and talking about fairies might seem superstitious. I don’t want to associate fairies with religion because many years have passed in the world history labeling them demoted angels, demoted pagan deities, demons and spirits of the dead. Instead I want to associate fairies with childhood memories when our minds were full of imagination and we believed every story we were told. I remember my grandmother narrating the fairy stories like this:

A long time ago a woman used to live with her children. Some of them were extremely beautiful and some of them were not that good looking. One day a strange-looking man was on her porch begging for food. As is our custom the woman invited him in and served him food and drinks. When the beggar was done eating he asked her to bring out all her children so that he could bless them. Concerned about the evil eye, the woman hid her beautiful children and brought out the ugly ones. The man smiled and uttered a blessing saying “let the hidden be hidden, never to be seen by mortal eyes.” That was how the fairies and their fairy lands were created. My grandmother always believed in their existence and respected their presence. Whenever we ate dinner she insisted we leave some for the fairies even when we were not full. That made me mad a lot of times.

The story of how the fairies originated might differ from time to time since it was mostly orally transmitted. The first notable literary work based on them appeared in early 20th century in the book by Ghebre-Medhin Dighnei. Since then research papers and articles have been written but in terms of a book “Kelte Meraawti Nehanti Meraat Abe Hade Meraa”, literally translated as two grooms for one bride at one wedding, is the best.

The book is fictional and incorporates the basic fairy folklores. The story begins in a fictional village where an old woman named Lettu could see and communicate with the fairies. When Lettu was a kid she used to have an eye disease which was taking over her sight. Advised by the elderly women in the village, Lettu’s mother treated her child’s eyes, enabling her to see deki hdrtna. Letu says that there is a kingdom of fairies made up of three tribes administered by one king. Members of the first tribe were smart with good looks, and the king was from this tribe. Members of the second tribe were fighters who were physically strong and loyal. The third tribe were dumb and lazy, and most of the time they resented the first tribe. The main story revolved around the marriage of Wuba (the most beautiful woman in Letu village) with a human like her, but what she did not know was the son of the king of fairy land was in love with her too. So, aside from the opposition to the union of fairy and human from the tribes, he planned to marry her the same day as she married her mortal husband. Addey Letu, in her 70s, was the only one who observed the conundrum and was the only one who knew that when Wuba gave birth to a baby boy he was half human and half fairy. Just like the Greek mythology of Hercules, the boy Wuba gave birth to appeared to be extra smart and powerful, and then the story continued on his discoveries and journey to his identity where at last he served as a bridge between the humans and fairies.

Have you ever noticed fairy stories are some of the few folklores that exist almost in every culture? Even though their story of origination relates with the theory of creation, belief in their existence gives us a common understanding. In Britain, especially in the Victorian and Edwardian era, there was a heightened interest in fairies, declaring they were creatures that brought all the disabilities and misfortunes to children at birth. They were known as misguiding travelers into their fairy lands, which is known as shikushuka in our tradition. People who claim they were in shikushuka come back to their normal lives with the same stories of how beautiful the fairies are but most of the time the community considered them as lunatic.

In the Scottish folklore, fairies are divided into beneficial and malicious. That’s the same case in Eritrea; the malicious ones are called Sreiel. The infamous tale that illustrates the types of fairies is Yohannes Wedi Zemo’s tale. Yohannes, a bright young man who lived on farming and herding livestock got married to a girl a forest away from his village. In Tigrigna culture, after the honeymoon, the newlywed bride goes back to her parents’ house, which is commonly called mlsote. During this time if the husband wants to visit the bride he must bring gift to his in-laws. Hence, Yohannes wanted to visit his wife in mlsote, holding a calf as a gift, and started walking through the forest. In the middle of the forest the calf scooted off and vanished into thin air. Knowing he would never find the calf, Yohannes set off to hunt deer in the forest. When he spotted one, he felt the trees moving the birds humming loudly as if they were trying to talk to him; that’s when he heard the voice of two females. One of the voices warned him not to shoot and if he ever shot the deer dead it would be upon him, but the other voice encouraged him to shoot while the deer was so close to him. With arrogance, Yohannes told the voices, “I already got my rifle ready and my knee is bent down!” The moment he fired at the deer Yohannes died.

As a generation that grew up looking at the television and computer screen, a lot of our real time has passed learning about other people’s culture without really and deeply understanding our own culture. I knew more about tinker bell in the Peter pan than deki hidrtna or any other Eritrean fable. But still, the time isn’t over yet. we have so many interesting stories that we would have to pass on to our children.

An insight into the literary genius’ mind. Meet Solomon Dirar.