Leap Year Traditions: Born on the 29th Of February. How old are you really? 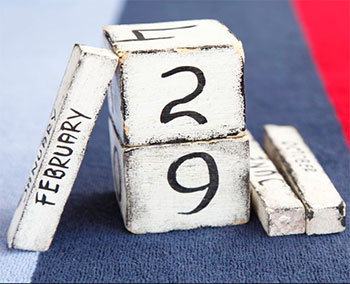 Have you ever wondered if you had been born on the 29th February, when you should celebrate your birthday on a non-leap-year? On the 28th or on the 1st? Or possibly not at all? How old are you really? What is a leap year and why do you have to skip your birthday because of it? And that’s without even considering all the myths that are associated with a leap year. Brain teaser, isn’t it?

The year 2020 seems to be going by so quickly that we’re already nearing the end of February, and for a lot of people, this time of year is just another month coming to an end. But to some, specifically those born on a leap year, is quite special.

Individuals born on Feb. 29th are called “leap lings” or “leapers,” and as much fun as they might have claiming to age only 25% as fast as the rest of us, people once thought that leapling babies would inevitably prove sickly and “hard to raise.” According to History.com, about 4.1 million people around the world have been born on Feb. 29, and the chances of having a leap birthday are one in 1,461.

A leap year is a year in the Gregorian calendar with 366 days instead of 365 – and unless you’ve been living on a planet with exact orbital resonance and some sort of self-adapting time system, you should be well aware of this.

But just for clarification, the leap year’s extra day is vital because a complete orbit around the sun takes slightly longer than 365 days – 5 hours, 48 minutes, and 46 seconds longer, to be exact, and a day is added every four years to compensate for the rest of the time that is lost every non leap year. Without that occasional extra day thrown in, our entire calendar and its corresponding seasons would eventually be way off and we’d be celebrating Christmas wearing shorts in summer.

History has it that at one time people observed a 355- day calendar, with an extra 22- day month every two years; however, this caused havoc within the calendar season and in 45BC Julius Caesar ordered his astronomer, Sosigenes, to simplify things.

Consequently, Sosigenes opted for the 365-day year with an extra day every four years to use up the extra hours. But why choose February and not October or December. Well, the extra day is added to February because it used to be the last month of the Roman calendar.

The system was then fine-tuned by Pope Gregory XIII. He coined the term “leap year” and declared that a year that is divisible by 100, but not by 400, is not a leap year. So 2000 was a leap year under the Gregorian calendar, as was 1600. But 1700, 1800 and 1900 were not. If leap year had not been created we would have lost about six hours of our calendar at an annual rate.

But it isn’t just a scientific thing. There’s a lot of lore behind it, and it’s observed and celebrated in a variety of ways.

Because such years are rarer than normal years, they have become lucky omens. Indeed the 29th February itself is an especially important day. Anything that starts on this day is considered sure to be a success.

Certainly February 29th in the leap year of 1504 was very successful for Christopher Columbus. The famous explorer had been marooned for several months on the small island of Jamaica. Though the island natives had initially offered him food and provisions, Columbus’ arrogant and overbearing attitude had so annoyed the natives that they stopped this altogether. Facing starvation Columbus came up with an inspired plan. Consulting a shipboard almanac and finding that a lunar eclipse was due, he called together the native chiefs and announced to them that God would punish them if they did not supply his crew with food. And as an omen of God’s intent to punish them, there would be a sign in the sky: God would darken the Moon. Right on cue, the lunar eclipse started.

Columbus dramatically disappeared into his cabin as the natives began to panic and begged him to restore the Moon. After more than an hour, Columbus emerged from his cabin and announced that God was prepared to withdraw his punishment if the natives agreed to supply him and his crew with everything they needed. The native chiefs immediately agreed, and within minutes the Moon started emerging from the shadow, leaving the natives in awe of Columbus’ power. Columbus continued to receive food and supplies until he was rescued in June 1504.

There are also other many interesting traditions and superstitions that occur on leap day, especially regarding weddings. Some people believe that leap day is the equivalent of Friday the 13th and that it signifies bad luck. In Greece, a number of people dread the idea of getting married during leap year, and it is considered especially unlucky to get married on leap day.

In Ireland, the idea of marriage on leap day is not considered bad luck. In fact, leap day is a day on which women in Ireland traditionally propose to men. Just as leap year balances our calendar with respect to the Earth’s irregular revolutions around the sun, leap day in Ireland brings some balance to the traditional roles of men and women. If a man refuses a proposal on leap day, he is expected to pay a penalty to the woman, which can range from a gown to money.

Where as in Italy legend has it that women are erratic during a leap year and several proverbs warn against planning important life events in a leap year. “Anno bisesto, anno funesto” means “leap year, doom year”.

On the other hand, Farming folklore says beans and peas planted in a leap year “grow the wrong way”. Scottish farmers believe leap years are not good for crops or livestock, thanks to the old proverb: “Leap year was ne’er a good sheep year.”

In terms of the weather and leap year, in Russia it is believed a leap year is likely to bring more freak weather patterns and a greater risk of death all round.

As superstitions have it perhaps that is the reason we are experiencing unpredictable weather patterns these days, mornings are either cold or mildly warm only for noon to be utterly hot and evenings unbearably cold. I for one am having a hard time keeping up with the weather.

Past the traditions and lore’s, our calendars, be it the Gregorian calendar, Julian calendar, Islamic calendar or traditional lunisolar calendar, all are just as imperfect as us humans. It is, however, in a way, our imperfections that make us perfect.

To those born on the 29th of February, Happy Birthday!