Days of old, are our virtue’s still intact? 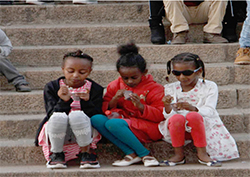 Eritrean women of the 1920s waited for their husbands to come back alive from the war in Libya.

With a heavy heart and poverty hovering in the distance our grandmothers waited till their Askari husbands returned home safely.

Eritrean women didn’t need chastity belt in the absence of their husbands in the manner of the Crusaders who on leaving for the Holy Land to fight against ‘infidels’, felt very insecure about the integrity of their baptized spouses and invented the chastity belt. Very crude of them!

Nowadays, with many male maniacs looking for greener pastures and with most women leading frivolous lives, the departure of a husband to a faraway country heralds the beginning of a scandal.

Friendship was very much valued in Eritrea in the past. It meant sacrificing one’s life for the sake of one’s friend. For this, the two friends-to-be swallowed small pebbles and the eternal friendship were, thus, sealed. After such a ritual, which is recorded in heaven and on earth, your friend stood by you everywhere and whatever the cost. He paid your ransom money in the event you were kidnapped. He stood as a guarantor in case you wanted to borrow money. And in the end he gave the hand of his daughter to your son in marriage and you showed the same kindness and consideration in return.

Now we see people who have several friends but no one to love them and to sacrifice even the least of this world’s comfort for their sake. No wonder, in Eritrean towns, people are befriending the bottle and are ending their lives in its grips.

Nowadays I see people amassing riches with no thought for the things that transcend the material world, and as the hour approaches the eternal departure, they are the shadow of their former selves, their lives strewn with shattered dreams and broken hopes.

Eritreans are family people. We like the warm family life and shun faithlessness and eschew all types of promiscuity and easy familiarity in order to maintain the sanctity of matrimony and for the sake of the good upbringing of the children. Anyone who plays the odd man out in this cred mission is considered an outcast.

I once heard of a story that a long time ago a certain father had disowned his son. The son had shamed his father by raping a girl. Had it been in Japan the father would have committed hara-kiri (eviscerating oneself with a long sword). In Eritrea, the custom was kicking the source of the scandal out of the house or even asking the church to interfere by excommunicating the black sheep of the family.

I asked my mother what it all meant. She told me that it would have been better if the son was not born at all, for he sinned against God and against his father.

What was strange at the time was, however, not the disowning of one’s own son, but the unanimous approval of the whole neighborhood.

As recently as a couple of years ago, a friend told me of a lecherous person if ever there was one.

“I won the court case because of my father,” he said to his friend with a smirk in his face.

As would be expected of such a person, he had gotten a girl in trouble. If proven guilty, he was liable to marry the poor creature. His father, who knew better, went to court with his son and gave false witness against the victim. He must have bribed the magistrate, for in the end his son had the last word and the pregnant teenager went home sobbing. Some father!

What about returning lost and found money that is not yours? In Islamic culture, ill-gotten money as well as money obtained without work is haram (unlawful in the sight of God).

Once my little brother went to a shop owned by a Moslem businessman. He bought a kilo of sugar and gave him a banknote and almost left without taking the change. That is until the owner called him back and gave him his change.

“I don’t want genzeb haram (ill-gotten money) to defile my cash drawer,” he said as he left. My brother was astonished by his honesty as he told me what had just happened to him. But more than that, I heard people say about him that when his son was run over by a car and died a year before, he first pardoned the driver accused of manslaughter and when people asked for explanation, he simply said:

“Allah gives and Allah takes away.” He asked neither for blood money nor for financial support regarding the money he spent for burial and the subsequent feast given in honor of the deceased.

Last but not least is the Eritrean habit of entrusting one’s possession to a person of high sense of integrity and honesty. This person can, strangely enough, be a neighbor living in the same compound, a shopkeeper for whom you are a longstanding customer, an old time friend, etc. A woman going on a visit to a faraway village or out of the country would most of the time leave her precious belongings — gold laces, rings, earrings, and brooches — with her confidant (amanit) and would feel more secure than if she had deposited her life savings in a Swiss bank.

Giving one’s gold jewelry to someone for safekeeping during travel or in times of insecurity was common in Eritrea in the past. Twenty thousand Nakfa worth of jewelry and other belongings would be deposited without a signature or affidavit, and when the person came back from the journey or after the restoration of stability and peace, the entrusted possession would be there, safely kept for its owner to collect.

In our tradition, it is not lawful to touch money entrusted by a friend for safekeeping. It is genzeb hidri and remains so until the owner claims it back. When someone entrusts you with money or other possessions, it is a spiritual tie that binds. You break it and the last flickering trust in mankind is destroyed.

A memoir of my first trip to Adi-keih

“We kept the Yellow Jersey this time!” Natnael Tesfatsion, Cyclist