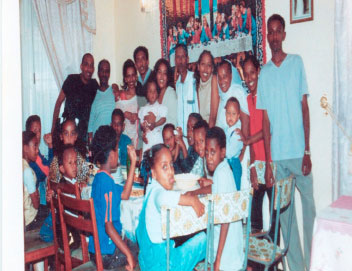 Reading alone in a café, deeply engrossed in my book, I once got a rude awakening from a friend who happened to be there.

“How can you sit there all by yourself ‘talking’ to a book,” he said. “C’mon, shake off your slumber, after all life is there to be enjoyed and not to be contemplated.”

In brief, he wanted me to join him and drink with him, trading the latest jokes and commenting on current gossip.

The lone wolf is held with suspicion in our tradition. If you are of the lonely type, you must be either ‘mental’ or going in that direction.

According to tradition, a person who prefers to be alone is a workshop for the demon, who consults with him and talks to him and laughs with him, with the aim of one day possessing his soul and commanding him to commit criminal acts.

The old maid, who stays at home, forgotten in the world, is not considered a witch in our tradition as was common in Europe in the middle ages. But I knew a certain lady by the name of Tsirha who lived alone in a creepy little house a bit removed from the residential quarter, which everybody wanted to see. She never talked to people and, worse, she hated little urchins like us who molested her with our quick glances at her half-closed grimy wooden door.

From time to time we threw stones at the house, our way of saying Good-day to Mrs. Tsirha. She would throw everything she could lay her hands on at us in reply.

The ladies made her their main topic at coffee ceremonies. Some were very much afraid of here. Especially at night!

Anyway, a little pain in the stomach and an accident here and there were sometimes attributed to her evil powers.

There is also this bachelor who lived alone in a small rented house. No wife, no children, no friends, no sign of wanting to get married and all kinds of excuses not to mingle with people when invited.

One girl who lived in the compound made the fatal mistake of falling in love with him. The unrequited love made her lose her mind, and finally her father, who happened to be the landlord, kicked him out of the house. You love my daughter or you leave the house.

The loner, the recluse and all types of people with the tendency to remain aloof from social life are frowned upon by the society. They may be scientists or creative artists; they have simply to conform. Only saints or hermits are permitted to lead a lonely life.

A ‘real’ person has to socialize. ‘The one who eats alone dies alone,’ is a Tigrigna proverb addressed to an individualist.

Someone who gets a lot of money has to share it with friends, for tomorrow may never come and life is just a mirage that has no meaning without love, laughter and friendship.

In our tradition, love and fellowship are given more importance than money and fame. The psychiatrists who fleece their patients in Europe and America have no place in our country.

You feel depressed? Just talk your problems over with a friend over a cup of tea or coffee. Your friend cures your depression and, what’s more, he pays for the tea or coffee.

You are not happy with your wife? Go to Addey Tekea and pour your heart out to her. She will brew you coffee and the ‘psychiatric session’ will begin in earnest. You get cured plus a free coffee.

When American GIs returned home from Vietnam, they were received by a hostile people who had been protesting against the war all along. The unfortunate soldiers, who were victims of their government’s mistaken policy and their people’s selfish stance, had nowhere to go to heal themselves of their trauma, and the mental agony was so unbearable that most turned to wanton murder and hooliganism. Rambo is a good example.

After 30 years of bloody war for the liberation of Eritrea, those who were victims of wartime trauma and social disruption could get all the love and respect from their fellow countrymen, and their smooth and loving integration with the people was phenomenal.

Ours was to some extent an extended family life, where in a compound five or six families live with each family occupying a single room and sharing a kitchen and a lavatory. In that small and dark room lived father, mother, children and sometimes a story-telling grandpa and an inquisitive grandma.

The moment the mother went to the market to buy corn, the above mentioned members of the extended family took over. They taught you to be a real man and stop crying or whining.

And then there were the other families in the compound who gave you refuge when you rebelled against your own family.

The oldest and wisest man in the compound acted as a self-appointed magistrate from time to time. There is a drunkard who has beaten his wife the other day. The victim, her eyes wet with tears, pleads for mercy and for justice for herself and her starving children, which is soon dispensed.

Alas! All this has now become a thing of the past. A once upon a time story! Many reasons can be given for the decline in the extended family and compound life. But the main factor is the disruption of family life.

Colonial powers, with communist tendencies, gave family values the least importance in a bid to further materialistic Marxist doctrine. For them family values were bourgeois invention and an obstacle to the progress of communism.

The other reason could be attributed to the capitalist cultural domination working through television, books and the internet.

According to the current cultural trend hailing from the West, family values are again seen as obstacles, but this time around they are obstacles to the progress of unfettered capitalism and globalization.

Now, people have started to go Dutch in bars or in tea shops, each paying his or her own bill.

The family that felt elated to receive even an unwelcome guest who drops by at ungodly hour, is now terror stricken when someone knocks on the door at around one o’clock in the afternoon, lunch time.

The friend, who used to buy his friends five or six rounds of drink in a bar, has now changed into a thrifty individualist and goes to drink alone.

Gone are the days when mothers left their children with the neighborhood women for daycare. “Why should I spend my time chasing after her child?” blurts the inconsiderate next-door woman. She is right. She has a lot to do during the day, like drinking coffee with her friends, visiting old acquaintances living on the other side of the town and, most probably, conducting a long legal procedure against a relative.

The specter of individualism is haunting every family and household. But the worst part of it is that people consider it a mark of civility. The old time tradition when the lone wolf or the selfish individualist was a curse has now become obsolete. Respect for family values and simple and unconditional love is now regarded as too rustic to fit into the civilized social life whose roots are firmly established in the West, which is enveloping the whole world.

But, one day, people will get fed up with the present life and will regret what they have missed in life, and will return to the old tradition that cherishes extended family life with all its noble virtues and deep human inspirations.

So let’s not take our culture and tradition lightly. As the Tigrigna proverb goes, “The gold that you have in your hands seems but a baser metal like brass.”

Heroes of All Time

This week in Eritrea’s History