Time Shall be No More! 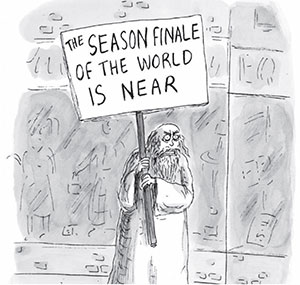 Due to the recent circumstances, *cough*Corona*cough*, many would tell you the end of the world is upon us. Well, life certainly was fun while it lasted. Human beings drunk, ate, reached milestones beyond imagination and in the process ruined the world with no regard whatsoever while at the same time pissed off the Deity. Only human beings can manage to pull off both at the same time. We must reap what we saw then.

The end of the world discussion is as old as life itself. While there is a vast amount of literature on Apocalypse, let’s delve into a selected few for the day.

According to Eritrean tradition, the main ingredient that activates the doomsday machine is our sin, which comes in many shapes, sizes and colors.

Girls wearing miniskirts or baring their navels, boys plaiting the hair, youngsters eating without saying grace and ridiculing the elderly, women working out while husbands stay at home to do the dishes and brides laughing and giggling on their way to church. All these were and still are, in our tradition, considered signs and omens capable of unleashing divine wrath unless put back to normal on time.

Many lakes have already evaporated, many animals have become extinct and desserts are invading arable lands because of our sins.

It would, however, need more than a priest, a theologian or a scientist to explain the ‘electromagnetic’ or ‘metaphysical’ relationship between human iniquities and natural disasters.

In our tradition, all calamities have spiritual interpretation. Even wars are considered by some to be divine wraths, visitations from above, to be listed along with earthquakes, pestilence, famine, locusts, hailstorm, floods, pandemic diseases, etc. These are to be warded off by special prayers and the collective invocation of the divinity.

In this, the difference between natural and man-made disasters fades away and, thus, all disasters, whether geological, social, economic or political, are natural disasters for, according to our traditional belief, man has no power whatsoever to bring disaster upon the earth unless God wanted it in the first place.

In other parts of the world, each society has a different interpretation of the last things and the ultimate truth, otherwise known as the Apocalypse.

Revelation speaks of a dragon, beast, four living creatures and other figures in ways that have led to many interpretations regarding the timing and details of future events, emphasizing on the destruction of the world in the last days followed by the making of a new heaven and earth.

Islam describes the events that lead to the end of the world. Natural disasters increase, and society undergoes a moral decline that leads to a surge in violence, bloodshed, anarchy and sexual immorality. A false prophet called Dajjal appears and fools people into following and worshiping him. A true prophet in the Islamic faith returns to slay Dajjal and rescue humanity from him. According to the Encyclopedia of Islam, those events eventually are followed by a day of reckoning, in which the dead are reunited with their bodies and handed a book containing their accumulated deeds. Those who led good lives will be admitted to heaven while those who were sinful are sent to the fires of hell.

In the book of Miracles, an illustrated manuscript made in Augsburg in Germany in the 16th century, one can find visions of catastrophes of all times, giant locusts swarming around a jagged aquamarine mountain, great whales and strange beasts floundering amid stormy seas, inky skies raining hailstones and blood.

The Persian holy man, Zoroaster, taught his followers that someday the world, as humans know it, will end badly. As humans give way to temptation and become lawless and deceitful, society will break down and families will split up in hatred. Nature will shut down, with the sun becoming smaller and clouds increasingly darkening the sky and pelting the land with foul-smelling rain. Crops and trees will wither away. Finally, an army of long-haired demons who are “powerful and most skilled in smiting,” will invade from the east. But that menacing horde will be met by another army, one composed of holy warriors, who will engage in one last epic battle to defend goodness and purify the holy places that the demons have desecrated. A bit dramatic from Zoroaster, don’t you think?!

Scientists, who detest individuals who predict the end of the world as sensational, also have their own predictions on how the world will end. Man! Who would have figured!

Step to the fold, Sir Issac Newton. Newton predicted when the world would end more than three centuries ago, which did not leave humanity with much time. Resurfaced papers, which were first discovered in the trunk at the house of the Earl of Portsmouth in 1969, reveal he believed the apocalypse would come exactly 1,260 years after the foundation of the Holy Roman Empire.

In a letter from 1704, which went on show in Jerusalem’s Hebrew University in 2007, Newton uses the Bible’s Book of Daniel to calculate the date for the end of the world. The note reveals a deeply spiritual side of a man usually regarded as a strict rationalist.

Newton, obviously getting a bit religious now, would add, “This I mention not to assert when the time of the end shall be but to put a stop to the rash conjectures of fanciful men who are frequently predicting the time of the end.
“By doing so they bring the sacred prophesies into discredit as often as their predictions fail.”

Newton promises the end days would see “the ruin of the wicked nations, the end of weeping and of all troubles, the return of the Jews (from) captivity and their setting up a flourishing and everlasting Kingdom.”

He confidently stated in the papers that the Bible proved the world would end in 2060 and added, “It may end later, but I see no reason for its ending sooner.”

Like others, scientists as well just couldn’t help it but come up with their own version of how the world will end. The litany is, well, horrific. Scientists use historical evidence and scientific data to determine the biggest threats. Below are, realistically, what might cause humans to go the way of dinosaurs; Nuclear war?!

Climate change might be seen as a hoax by most daft human beings but it is a real threat to the world and its inhabitants. The question is ‘what are we doing about it?’

Ecological collapse — ecosystems are the glue that hold the Earth together but temperature increase and habitat loss is slowly degrading this habitable planet. In short, if we do not shape up we might need to find a new planet sooner than we think. Of course, we will end up destroying that one too and the cycle will keep on going.

Asteroid impact — countless Hollywood movies have been made in the past about a threat of an inevitable asteroid hitting our beloved planet to smithereens and wiping us mere mortals along with it; however, at the end of the day a bunch of glass wearing scientists and Bruce Willis save the Earth and everybody lives happily ever after. Well, in real life things just don’t go that way.

Artificial Intelligence (AI) might sound like something out of ‘The Terminator’ but as AI keeps progressing rapidly, there are concerns that it will be too good at its job. Imagine an AI war.

And then you have pandemics. History has seen two different pandemics killing an estimated 15 percent of the population in the 5th and 14th centuries. While medical technology is very advanced to tackle any sort of disease outbreak, we have seen in recent times how Sars and Ebola can put strains on world populations, especially given today’s urban and mobile global population. It is precisely that which seems to be speeding up the spread of COVID-19 around the globe at the moment.

Death in numbers, countries closing borders and pointing fingers at each other, financial meltdowns, disruption of day to day activities, it all does feel like it is the end.

And of course no list of Apocalypse is complete without the nut jobs, which are conspiracy theorists and their barmy claims. Mysterious ‘death planet’ Nibiru, blood moon, God appearing on television, alien invasion; you name it.

Honestly for the life of me I cannot seem to explain human’s obsession with figuring out how the world will end. Scientists say that our minds are wired to crave certainty and worry about the future. So believing that we know how everything will end— even if it is a vision of a planet enveloped in fire—may give us more comfort than not knowing what will happen.

Most Eritreans reproach the world for its perfidy, infidelity, vanity, cruelty, its double standard, its being two-timer, and label it as a liar, a cause for family misunderstanding, for the fight between brothers, and a treacherous and brazen-faced traitor.

According to tradition the earth, which was created a long time ago as a place for mankind to sweat and toil, will one day come to a halt. That is the end of the world as we know it. Everything that has a beginning must also have an end. It is as simple as that.

And when will be the end of times? Who knows!

The good news, however, is that we are, as our scientific and technological knowledge advances, ready more than ever to challenge nature even if at times it sneaks up on us unawares and from time to time manages to outsmart us.

In this unpredictable world of ours, calamities (in all their form — geographic, economic or political) will always follow us wherever we are. Our task is, therefore, to accept them as solvable problems and fight them with all that is available to us to bring them to naught or put them under our control! Panic should under no circumstance have a place in our minds.

The demise of Nadew on its 32nd Anniversary