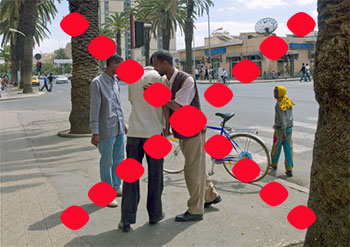 Covid-19 might as well have killed the culture of physical greeting; absolutely no one will ever touch anyone to say hello. That is the new normal we have to live with. The shoulder bump, cheek kisses and handshakes are possibly dead. No amount of ventilators and resuscitators will save them.

Let’s, however, take a minute and look at the long and illustrious careers of the shoulder-bump, cheek kisses and handshakes.

There are people who meet you in the street after ten or twenty years of absence and the only thing they can exert themselves to utter is ‘Hi”. The same with their own family. I have seen this in Western films many times. Kissing the family members is out of the question. We are not the kissing type; they just say hi and the conversation starts.

In the orient (and in our own country) it is a bit exaggerated. A member of the family is in America. He announces that he will be arriving on such and such a date and time. The whole family is agitated in the manner of the Great Millennial Expectation of 1844. The flight number and time of landing is communicated by the greatly expected guest who, on his arrival, is welcomed in a way that makes any head of state (or even a generalissimo) green with envy. Expressions of joy and elation are accompanied by ululation, falling on the neck in embrace along with kissing, hugging and shedding of tears. Distant relatives are there to welcome the ‘long lost son’ and in the melee you end up kissing and hugging the wrong person. Does it matter?

In Eritrea greeting people is an art. As you walk in the street, you meet someone you think you know somewhere. Passing by without acknowledging him is a breach of social norm and if you are sure you know him/ her you greet them by first giving them a handshake:

“How are you? Haven’t seen you for a long time.”

“Michael! Is that you? You have changed a lot.”

And you go on inquiring about his health and his family and his work. Sometimes you cross the line of propriety and unconsciously make your acquaintance remain on his guard.

I remember one day an elderly man, a distant relative, stopping me in the street for the usual greeting ritual. After asking me about my health and that of my family, he wanted to know if I was married yet and then went on to ask about my work, my salary, etc.

Some people are very curious, and what’s more, they expect you to tell them everything. I didn’t want to offend him by not telling the family secret!

They say that in the Eritrean lowland, greetings are occasions for passing information as well. A man walks in the vast immensity of the semi-desert with his arms resting on a stick which runs astride his shoulders. He meets another nomad, like him, and they stop to greet each other. They don’t talk about the weather like the English but about the general situation in their surroundings. A man coming from Keren gives detailed information about the situation in Keren, a kind of social, political and economic briefings. The other one who has visited Ginda on his way in turn briefs his guest. In a harsh desert environment, the passing of correct information about one’s surroundings is a matter of life and death. No wonder, the Derg regime hated such ‘whisperings in the wilderness’ and tried to turn such culture to its benefit in vain.
One of the commonest plights that befall polite people is when they try to greet a friend or an acquaintance because not doing so might be considered an offense. This is a problem many Eritreans encounter every day.

And he was in a hurry to get to work on time.

“Where are you going? (You know you shouldn’t have asked such a stupid question.)

“Where else do you expect me to go at 7 am in the morning?”

You got just what you deserved.

“How is your dear mother?”(Something tells you that you have learnt nothing from your first stupid question)

“How come you don’t know that she has been dead for nine years now?”

Me and my big mouth you say under your breath and leave the scene as quickly as possible.

Women are clever at untangling themselves out of similar embarrassing situations. The usual greeting ritual follows certain steps:

Kissing followed by loud smacks (false kisses) repeated three or four times. The number of false kisses increases with the depth of acquaintances. Being wicked, the human heart is sometimes difficult to guess whether the long repeated kisses are signs of tender loving care or cover up for a deep seated hatred. Why should your enemy know what you are thinking about?

Then comes the second phase when women can say anything that comes to mind and it finds ready listener. They can talk about the most insignificant things on end and sound as if they are talking philosophy. They have all the time in this world, and they stop only when they feel like it.

Then you have the shoulder-bump type of greeting. This was introduced by the freedom fighters. It is a vigorous version of the one practiced in the countryside. People say it is the real thing. It is also more hygienic than the cheek-to-cheek kissing. The problem is that sometimes there is an unequal match between a robust youngster and an old frail man. The shoulder can send a sickly octogenarian rolling on the pavement. Fortunately, your acquaintance has good sense to hold you steady with one arm in case you stagger.

Shaking hands has become deeply engrained in our greeting culture that a person who has been eating or washing his hands will use his arm (not his hand) to complete the ‘handshake’.

I have heard people say that the handshake is a recent introduction into our culture. You go to the villages and you rarely see handshakes. The normal procedure is to ‘bump’ the acquaintance on the shoulders lightly and he does likewise.

Another interesting habit in our greeting culture is the utterance of welcoming words to anyone whom you meet in lonely paths or streets.

You don’t just pass a person in a deserted street without saluting him or her. You are more or less saying: Peace be unto you. And any passerby expects similar words from you and from himself.

As for the one who comes to your house, the tradition prescribes a type of greeting and reception similar to the one practiced by the people of the Old Testament in the past. In fact, many a wayfarer who is invited to enter the dwelling of strangers can’t afford not to mention the proverbial receiving of guest of our Father Abraham and his wife Sarah. Give me the same or approximate treatment is what he is saying deep down.
The culture of receiving guests in the manner of the Patriarchs is of course disappearing from the Eritrean traditional landscape due to several factors: the adulteration of our culture following successive colonial regimes, the urbanization of the countryside and impact of progress on the lifestyles.

In the days before Corona, the westernization of our culture was beginning to be visible among the young who didn’t seem to give a damn to proper manners of greeting. Bowing was out of the question. Kissing was confined to close family members if any. Old people were to be avoided as much as possible.

And with the new reality of social distancing Covid-19 has forced upon us, the physical Greeting Culture might even disappear altogether. The shoulder bumps, the cheek kisses, the handshakes could possibly be a thing of the past. Enter the dub, the peace sign, thumps up, Wakanda forever and Comedian Minus’s “Ab Libey Seferka”, loosely translated as “You are in my heart”.

The fight against COVID-19: “It is all about Survival!” Dr. Senait Bahta