The fight against COVID-19: “It is all about Survival!” Dr. Senait Bahta 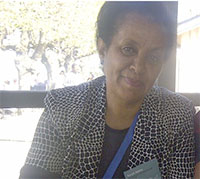 As the global community is now universally fighting the spread of COVID-19, several behaviors are being promoted as main tools of defense.

They include social distancing, cleanliness, humanitarian assistance and social adherence to regulations urging self-quarantine and isolation. Just like the rest of the world, as the Eritrean community too is adjusting to a new life style indoors, Dr. Senait says several of the practices called for during the fight against the pandemic have always been part of the Eritrean culture. We’re speaking about compliance with guidelines given by the Ministry of Health and lending a helping hand to members of the society, amongst others. In order to better understand the behaviors that are now being promoted in the fight against COVID-19, ERI-TV’s Petros Menghis spoke to Dr. Senait Bahta. Based on it, we present you our talk with Dr. Senait Bahta.

A veteran freedom fighter, Dr. Senait Bahta is an Assistant Professor of Anthropology at the College of Businesses and Social Sciences in Adi Keih . With a long journey in academics related to women, culture and societies, Dr. Senait did her masters at the University of Kent, U.K., in 1991 and her Ph.D. in Anthropology at the University of North Carolina at Chapel Hill, USA, in 2001.

There were more complications back when the knowledge of medicine was limited. But societies had their ways of combatting the spread of communicable diseases. When diseases invaded villages, traditional societies would adopt guidelines to control the spread. First and foremost, authorities were notified at the soonest. Information sharing was notably important as precautionary measure. Indigenous medicine practitioners, village chiefs and authorities would use their networks to call for the assistance of local wise men and health practitioners. Moreover, traditional communities used extensive quarantine and isolation measures during outbreaks. Infected households would be under quarantine and provided with food and other necessities by neighbors or anyone assigned by the village chief. Other activities that would normally be performed by the family in quarantine would also be tended to by assigned members of the community. If believed to have been infected, the household’s gadgets would be burnt down to ashes and the cadavers would be cremated. Survival is an issue, always. And that had to be ensured at all costs.

It is not. I was shocked myself when I first learned about this particular aspect of fighting the spread of outbreaks. So I made sure by checking over and over again. I also checked with priests and learned that some 80 to 90 years ago, Gheremi, a small village on the high lands, took similar measures to contain the spread of an outbreak.

We’ve clearly seen now more than ever that the spread of information is very important when fighting a pandemic. For this reason looking at how people react to the shared information is interesting. Today, we have technology that enables speedy distribution of information. In the past information was shared orally. However, in cases of emergency, traditional communities would rapidly spread guidelines and regulations through schemes adjusted for specific times so that societies would be cautious. Caution that required communal efforts, obviously.

Penalties may differ. But when it is about something that the whole community has to stand against, and individuals or families did not align, the most evident thing they would suffer is getting ostracized. Like I said earlier, a big part of the conventions of Eritrea’s traditional communities nourishes unity, living together. In good times and at bad times, at weddings or funerals, people are bound to live and go about their daily lives together. Therefore, when a family is ostracized it is considered one of the biggest moral chastisements. Moreover, punishments may vary in kind based on customary laws and decrees. But generally, habitually, people have mutual respect for one another and that’s where we find the harmonious coexistence of local communities. It is taken for granted that if one family is to live well then its neighbors and community must live well too. The wealth and wellbeing as well as the burden of whatever tribulations are equally shared.

Eritrean communities fondly nourish values of ‘togetherness’. Therefore, it is common for people to lend a helping hand to whoever needs it most. And that is something that has been passed down from generation to generation and is now something that Eritreans are most known for. This traditional practice was highly encouraged in ancient times too. For instance, parents would send their kids to households inhabited by the elderly or disadvantaged people to help them in their farms by working the land and looking after their cattle, sheep and goats. Sometimes, mothers would accompany their children to help out. In this process not only do families look out for one another but the youngsters would grow up to be hardworking and caring members of the society.

Hygiene is promoted in traditional communities of Eritrea. Cleaning is a mandatory ritual performed before and after many activities of the day, both religious and secular. Not washing your hands before eating, feeding babies or cooking, amongst others, is a taboo. Another taboo is coughing without covering your mouth. Isn’t that being promoted now as we fight the Corona virus? Therefore, I can say that Eritrea’s traditional communities were highly civilized. They maintained and passed down deep- rooted traditions and manners that demonstrate their deep understanding of health and wellbeing.

Mothers are peculiarly strong everywhere. Speaking about Eritrean mothers in traditional communities, I can say that they were and still are always at the frontline in times of crises. Mothers take upon the role of ensuring the well-being of their families; therefore, they assume most of the responsibilities to safeguard the interests of their families and neighbors. They were the nurses of their times. The instincts of mothers are what save lives on many, many occasions.

Stay safe and stay at home!