A new fieldwork season in Eritrea: new remains of giant mammals, plant trunks and artifacts older than one million years 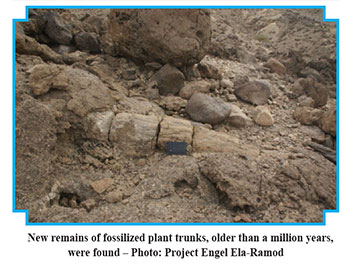 The Archaeological Heritage Research Branch (AHRB) of the Commission of Culture and Sports, in collaboration with the Spanish research institute of IPHES (Catalan Institute of Human Paleoecology and Social Evolution), has been conducting joint research activities at the Danakil Depression of Eritrea since 2012.

Each year the project has been discovering interesting artifacts with the potential of ascribing the area as one of the most remarkable places in evolution research.

This year marks the 8th term field and laboratory study of the project, and AHRB, together with IPHES, is reporting the results of this year’s campaign.

Part of Engel Ela-Ramud basin: The findings from this Basin will help to understand the climate and ecology of the Early Pleistocene times in the Engel Ela-Ramod basin. Photo: Project Engel Ela-Ramod.

From February 16th to March 11th, jointly led by Bienvenido Martínez-Navarro, ICREA Research Professor (Catalan Institution of Research and Advanced Studies) attached to IPHES Catalan Institute of Human Paleoecology and Social Evolution), and Tsegai Medin, researcher at the Eritrean Commission of Culture and Sports (ECCS), a team of paleontologists, archeologists and geologists carried out the eighth fieldwork season at the Engel Ela-Ramod basin, in the northernmost sector of the African Rift Valley, in the Afar triangle, near the place where the famous Lucy, the Australopithecus afarensis fossil female skeleton, was discovered. New remains of giant fauna, fossilized plant trunks and artifacts, older than a million years ago, were found, and will help to better understand the climate and ecology of that period in Africa.

After the paleontological and archaeological surveys were carried out in the Delahaitu, Gameré and Bolali areas, important Acheulian lithic artifacts and fossils of large mammals were found. Some of them were on the surface and many others were in their original position, especially those corresponding to buffalos, elephants and pigs. In addition, a new level with fossils in situ was found at the Erau sector in which two incomplete craniums of giant hippopotamus (Hippopotamus gorgops) appeared. These works have been done by Lorenzo Rook and Luca Pandolfi of the University of Florence, Tsegai Medin and Dawit Araia of ECCS, Jesús Peinado, the restorer hired by IPHES, and Bienvenido Martínez-Navarro.

The same team has surveyed the sector of Dibokole-Diaritana, where some bone remains and trunks of fossilized plants have been discovered. These findings will help determine the tree species that were present in the region during the Early Pleistocene.

The excavation at the site of Luba Gadhi II-Gallardo continued under the direction of Antoni Canals (IPHES-URV) with the collaboration of Abel Ghirmay, Isaias Tesfazghi and Samuel Tesfamariam of ECCS. A total of 14 m2 were dug and 44 records corresponding to Acheulian lithic artifacts and fauna recovered, mostly corresponding to crocodile, hippopotamus and a giant pig called Metridichoerus compactus.

The geological works led by Prof. Oriol Oms of the UAB have also continued, collecting new cartographic data and sampling various stratigraphic series (Ado Qwawleh, Sasaktoli, Gameré, Luba Gadhi and Erau) for the study of isotopes through the records of ostracods and gastropods by Alejandro Granados of the University of Málaga. The findings will help to better understand the climate and ecology of the basin during the Early Pleistocene.

The last week of the season, already in the capital of Eritrea, Asmara, was devoted to the restoration and study of archaeological and paleontological materials in the laboratory of the Commission for Culture and Sports, directed by Tsegai Medin.

This project, which is entitled “Archaeological and paleontological study of the Plio- Pleistocene from the Engel Ela- Ramod basin, Danakil depression (Eritrea)”, started in 2012.