Q: Where were you on Independence Day 29 years ago? A: In Ethiopia, still Fighting! 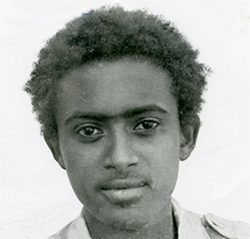 Solomon Berhe, who was then a 27-year-old young man in the mechanized units of the Eritrean People’s Liberation Front (EPLF), was one of the many EPLF freedom fighters deployed in Ethiopia to assist the Ethiopian People’s Revolutionary Democratic Front (EPRDF) in the fight against the Dergue. On May 24, 1991, while his comrades were rejoicing with their compatriots in the liberation of Eritrea, Solomon and his fellow fighters were still fighting in Ethiopia. They were marching towards Addis Ababa for what would then be a total liberation of the Ethiopian people as well. These events were later compiled in a historic book under the title: ‘Wefri Sigre Dob’, translated as ‘Cross-border Operation’. Currently Director General of the Press Department at the Eritrean Ministry of Information, Solomon, a journalist and an author, shares his recollections.

It was. But some of us were still at war. When we heard that Asmara was under our control and people were finally freed, my companions and I were extremely delighted that words cannot express. We got the news while our mechanized and artillery units were marching towards Addis Ababa assisting TPLF troops. I remember exactly how we were crossing a town called Debreberhan and my companions started shouting and screaming out of joy. Yes, we were at war, but we had to party regardless. We did it in our way; we started firing into the air out of joy! A barrage of bullets to echo the news of the liberation of Eritrea! We were still at war, but those shots were in honor of the Eritrean glory. After all, a thousand mile or so away from where we were, a Nation was being born at a heavy price; a home for Eritreans.

You were marching alongside TPLF troops; the sudden firing of guns must have been rather startling to them.

It was at first. The firing came about unannounced. But we were young and excited. We left home for that very reason (liberation of Eritrea) and we just had to celebrate somehow. In fact, when they realized what was happening, the TPLF troops did join in our merriments in the same way. I still can’t get that moment out of my head. It was big and very memorable.

Dergue’s stronghold was in Eritrea where the resistance on our side was exceedingly sturdy. So relative to what we had gone through in Eritrea, the battle in Ethiopia was lighter. There was no strong resistance. By that time, after the demolition of the Dekemhare Front in Eritrea, Menghistu Hailemariam had already fled Ethiopia. However, there were some fire exchanges in the vicinities of Menelik State House in Addis Ababa, where our tanks were deployed.

It was not only the TPLF but other movements too. Indeed, the EPLF had forged, over time, alliances of solidarity with various liberation movements in Ethiopia. These had their ebbs and flows. The general conviction of the Eritrean people is, of course, the same as it has always been. We wanted our neighbors to prosper so that we can focus on doing the same. Everything the EPLF drew up and conducted had its strategic reasons and explanations. We did have notable differences with the TPLF, but at that moment, we were focused more on joining hands with various opposition movements in Ethiopia to finish off the war in the best interests of both peoples. And the truth is they did appreciate our assistance. So much so their high ranking officials openly expressed their gratitude. I was present at one event. The TPLF hosted a celebration for our Independence in a place called Sendafa. There, high ranking officials praised and appreciated our assistance. EPLF deployed its mechanized and artillery units to assist them until they reached Addis Ababa. Moreover, our special forces, the ‘Commando’, had been there before us, scouting and clearing the way for us. Our support was vital for TPLF forces to fully engage in advancing forward.

I do. Generally, our liberation front had four mechanized divisions, brigades. Three were in Eritrea while one, which I belonged to, was deployed in Ethiopia. Our main task was to back-up the TPLF infantry. We fought in most fronts of Ethiopia. There was intense fire exchange in Debre Tabor Front. There, we seized the cities of Bahrdar and Gondar. After that we split into two and then we marched through Gojam, Welega, Fincha, Godar and Ambo and got to Addis Ababa directly through the west. The units advancing through the north pulled out to move on through the front of Dessie, attacking the front of Wuchale.

It had paramount importance, of course. And we took it seriously because not only did we deploy our mechanized units but also lost fellow comrades who sacrifices their lives.

I wouldn’t know what to say. It was truly a heroic feat that saw genuine altruism. It is one of its kind in Africa but may also be in the entire world. Nobody can dispute our journey. History is made by people but no one can change it. The Eritrean struggle was an earnest struggle of a people that had had enough and was willing to risk everything for the sovereignty of Eritrea and securing its respected place in the world. We had virtually no meaningful external support as a Front. Ours was a popular struggle of almost a century. Experiences and lessons learned during that span of time were definitely what really defined the revolution. Militarily speaking we made the impossible happen. The Ethiopian forces were backed by the world: USSR, East Germany, Cuba, Libya and Yemen. Their strategists were big names that came from overseas. While on our side, it was all home-made. We started with minimal firearms. Bit by bit, we got about everything we needed and taught ourselves how to operate the firearms. Our forces were growing sturdy by the day. The only force the EPLF did not have was an air force. But we knew how to survive air raids. All of our heavy artillery and about every firearm were literally taken by freedom fighters that jumped on the enemy’s tanks. It was surreal. And in the process many young freedom fighters risked and lost their lives. We were few in number and yet we fought against an army of multiple hundreds of thousands. But that never bothered us because even if our army was little we knew that our real number was three million (the Eritrean population); our people were assisting us in every way possible. We were never alone. Knowing that, death was just worth it all.

We never had it easy. Decolonization in many African countries did not exact the enormous hardship and precious sacrifices that it entailed in Eritrea and few other African nations. But we earned it. Our forefathers stood up and fell for their rights. Then it was our turn to go for the last option: an armed struggle. We clashed against the biggest army in sub-Saharan Africa and it was fierce. We finally got the Independence our people fought for decades. Now, our younger siblings and children are on the frontlines securing this country as it still relies on them. We, the Eritrean people, had nothing bestowed on us on a silver platter. Therefore, when constantly faced by challenges and conspiracies our only option is to be relentlessly resilient.

Everlasting glory to our martyrs! May our people prosper eternally! My heartfelt greetings and gratitude to the Eritrean youth! They are amazing. Happy 29th Independence Anniversary!