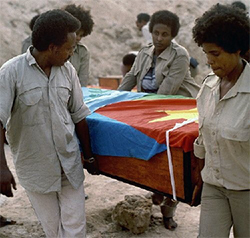 The most rebellious spirits to ever shake this planet touched hands with their creator as soon as their remains, once buried all over the battlefields, were collected and buried in their liberated nation Eritrea to the adulation of millions of their people.

The final gunshots were shot for the martyrs, the Eritrean Tegadeti. That was June 20th 1991. Since then, Eritreans at home and abroad have been commemorating Martyrs’ Day on June 20.

For some people it is easier to hate than to love although to love is more natural and takes no energy at all. It is said that hating saps one’s energy and dims the intellect. But hatred can also help you to accomplish a task if you want to do it that way.

Some people are all their lives driven by hatred to do even the most routine of daily tasks. Hatred, they say, gives them instant energy and enhances their stamina. The problem is that you can’t do the right thing in the wrong way. And most of the time you can go wrong and will only hurt yourself in the end.

To some people, hatred comes automatically. These are called misanthropes. It could be the way they have been brought up.

When you get old, you come to learn you have all the time hated the world in vain, for you cannot continue to hate it inside the grave. If there is anything to hate inside the grave, it is the grave itself. So, yours has been a lost time and you know it.

How about those who love indiscriminately as opposed to the misanthropes who hate unconditionally? These are sometimes identified as fools, and if they tend to persist in their love, they are classified as saints. To kill such people is to create martyrs, for they are now made to live more actively and more constructively in the hearts and minds of the people than it was the case when they walked upon the surface of the earth.

Deep inside, we are animals. Have you ever seen animals share food? Maybe they do it for survival, their own, and not because they have bleeding hearts or a might vision lying before them.

Why should I give my share of food or drink to someone else and bring death unto myself through hunger and thirst in the process? After all, I am not an angel. It is, as it were, everyone for himself and God for us all. You want me to share my food with you? First step back and put your share on the floor. How can I trust people who are in love with themselves and know nothing about loving their neighbors to share food with them? I have to get concrete examples of self-sacrificing people before deciding to share my belongings with my fellow brothers. In the absence of such people, I continue with my doubt. Some mystic souls have to show me the way first, says the skeptic.

Well, in the absence of such mystic souls, there do appear from time to time certain people who do not hesitate to sacrifice their lives for others or for even the most insignificant-looking principles or doctrines. They know that such foolish-looking acts bring more good to this world than anything else, be it survival or beyond.

If our freedom fighters did not have this attitude of self-sacrifice in the field we wouldn’t be enjoying independence at present. They lived as one and shared their foods and all. They put their friends’ lives before theirs. And in the end they got their prize: Independence.

So you see, you love your neighbor, you share your belongings with him or her, you sacrifice yourself for his or her sake and finally you get a prize, a reward in terms of freedom for your people and your country, a country that you will never see again with your physical eyes.

What made our struggle a victory against all odds was the mismatch between the two forces. On one side, you had the best trained and the largest army in Africa, which was well-equipped with all types of weapons bought at the expense of a starving people. The famine of Ethiopia (of biblical proportions) did not deter the enemy from arming its soldiers to the teeth to fight a long and bloody war. On the other side, you had Eritrean freedom fighters, few but tactical and resistant to the point of flirtatious stubbornness.

The Freedom fighters’ resilience during the armed struggle was an ability approaching God-like – they strode to the capital with courage and determination knowing fully well independence was about to be achieved. It was a time to no longer look back but to push forward; sovereignty was within touching distance and they pushed and pushed. The enemy did not know what hit them — their tanks were dismantled and their ships sunk under the non-stop attack of Eritrea’s heroes. To the tegadelti (freedom fighters), assaults meant the sacrifice of lives. If they had to assail the enemy, it should be done when success seemed assured, and the resultant victory was worth the cost.

What does it matter if I die as long as my country is liberated and my people are free, you say? And the moment you die, the freedom and joy of a free nation, the sound of ululation and the total euphoria of people in ecstasy pass before your eyes as in a film. It may take a fraction of a second, but in time of death the finite can easily assume the dimension of the infinite.

Dying for a cause makes that cause grow. As the cause grows, so does the number of those ready to sacrifice their lives for it.

I often read in foreign newspapers that such and such government or institution is doing its best not to have so and so killed because such a blander may make a martyr out of that person.

So what if that person becomes a martyr? No, no, let him or her die a natural death or let us wait for him or her to die in an infamous way and deprive him or her of possible followers, they will say.

The creation of a single martyr is more of a threat to an enemy than the crafting of a nuclear bomb by a rogue nation. The martyr lives more actively in the minds of the people for whom he or she dies than in the form of flesh and blood.

The enemy that fought our freedom fighters for thirty long years created a martyr with every kill. In return, the martyr inspired more to join the cause.

Ten thousand….twenty thousand…..thirty thousand and beyond a certain number (or critical mass) and the enemy’s days were numbered.

Animals do not sacrifice their lives for their brothers. If they ever do, it is again an act of pure instinct programmed in their brain to allow them to survive as a species. If eating one another from time to time could have the same effect on their survival, they would not hesitate to try that.

Only human beings are endowed with the capacity to love with a manner that transcends the fleeting things of this world.

Loving one’s country or people and giving one’s life for their survival is a virtue given only to humankind. It goes even one step higher, that of loving the abstract, like the God you don’t see or the idea you cherish in your heart. It could be a doctrine, a belief, a principle, etc.

By sacrificing your life for a religion, you go to your heaven, but more so you go to the hearts of the people that follow you.

But there are people who think otherwise. There’s no such thing as a free lunch, they say.

In most western film the words that always intrigue me are the ones that a person to whom a favor has been done utters instantly, “Why are you doing this for me?”

What is so unusual about helping someone in trouble or sacrificing one’s time and energy for a neighbor? According to the decadent mentality of our time, if you go out of your way to help someone in trouble, it is because either you want something in return or you have some evil intentions or some ulterior motives.

So the saint who goes around helping lepers wants Heaven for recompense. Okay. But what does the martyr who dies for his country want in return? Is every act to be looked upon with suspicion?

What is this world coming to? And to make every kindly move or sacrifice impossible and even frightening, we are hearing from the western world that sacrificing one’s time to play with a lonely or orphaned child, holding its hand, giving it candies, etc. is looked upon with suspicion. You can be arrested for pedophilia. Only the mother or the father is permitted to kiss their child. And even then, they are not free from suspicion.

According to some sick minds, even self-sacrifice is done with some sort of ulterior motive. Probably a higher position or maybe there is a streak of insanity in the family in the one who does the sacrifice.

I digress a bit to show how certain human feelings and noble virtues are being given a strange twist by the western world at present. If such warped thinking is not corrected soon, there may come a time when governments will, instead of honoring their heroes by awarding them medals, will, instead, order them to report to duty and ask them: “What is the reason for showing such bravery in the face of certain death? What is this bravery beyond and above call of duty that we are witnessing before our very eyes? Why are you doing this to your country?”

You will most certainly answer that you did it for the love of your country and your people. The way this world is behaving at present, don’t expect anyone to believe you.

I think martyrdom is dying in this world. It is time we look to the past to be able to apprize it.