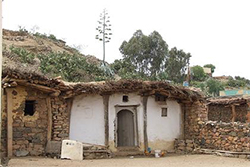 Mud bricks, stone and wood are the oldest and basic building materials known to man.

Mud bricks and wood have been mostly used for basic buildings such as residential houses or stables while stone have been used to erect important and impressive buildings like temples, which were meant to serve for extremely long time and endure for centuries. Men regarded stones as everlasting because the phenomenon of enhanced weathering due to environmental pollution did not exist in former times.

Since prehistoric times, humans have chosen to use stones to erect extraordinary monuments, mostly of religious importance. Due to their availability, stones are commonly used to build churches, houses, villages and towns. For exceptional cases rare and decorative stones like marble, which are transported over a long distance, have been used. When such precious stones were not available in near places, they had to be imported. This kind of culture is easily seen at the monuments of the ancient port of Adulis.

Evidence suggests that the marbles from Adulis have been imported from the Byzantine, Greek and Rome localities. The design of the building structures and elements had to be adapted to the mineralogical, physical and mechanical properties of the stone. The high compressive strength and the low tensile strength of stone require special techniques to overarch gateways and erect vaults.

Immemorial natural stone buildings have been considered a valuable and essential part of the building industry. Monumental constructions that have been created bear witness to extraordinary technical and artistic achievements.

For many years, a large number of fascinating examples of ancient structures of buildings have survived on the Eritrean landscapes. There are many of these structures in the countryside, and their style of construction has been incorporated in several modern buildings of towns and cities. The monkey-head construction style that was first seen in the Kidane Mihret church of Senafe was later applied in the modern Saint Mary (Enda Mariam) church of Asmara.

Further research is needed to understand whether the unique Eritrean house structures and monuments have similarities with structures in other countries on the Horn of Africa. The contemporary and typical structures of architecture in Eritrea are the H’dmo (a common traditional house on the highlands), and Agudo and Agneet (common on the lowlands). The Merebae, a semi-modern structure characterized by stone and wooden architectural features and zinc sheet, is common along the coastal towns of Eritrea. All house construction styles have rectilinear shape and form. They all use the same building materials — stone, mud and timber roof. Unlike the other structures, the Agudo is round and has conical thatched roof.

The contemporary structures reflect cultural and symbolic representations of the communities in Eritrea. The construction of the building has the potential to respond to the sustainability of the climatic condition and availability of abundant materials. The structures serve as images of the society’s lifestyle and reflect the needs of human beings at a certain time. Most of the vernacular buildings represent ingenious and considerable technical innovations and perform spectacular handcraft works.

The earliest evidence of ancient architecture (permanent settlements) in Eritrea dates back to the mid- 2nd millennium B.C. to the first millennium A. D. The period coincides with the flourishing of complex agro-pastoral settlements over much of the country and the Horn of Africa. This period is characterized by the rise of permanent villages and urban precursors in the first millennium B.C.E and the subsequent flourishing of urban centers by the first millennium C.E. In the course of antiquity, residential units, village assembles and urban centers with remarkably significant reflections of domestic architectural features appeared over a span of the millennia, and they have become references to understand the evolution of vernacular architecture in the Horn.

As far as permanent settlements are concerned, the first archaeological evidence to date comes from the sites of Sembel and Mai-Chihot in the Asmara plateau which dates to the 8th -4th centuries B.C.E. Wall features reminiscent of the ancient architecture were exposed during excavations in the sites and the distinctive features of these architectural units were revealed.

Several conjectures have been made about the reconstruction of these architectural features in comparison with contemporary forms. The elaboration of the unique architecture became more visible with the rise of urban civilizations in the Horn from the first millennium BCE to the 1st millennium CE, when the architecture showed a regional pattern and distribution across many of the renowned archaeological sites. The typical monumentality that appeared in the region during the period was accompanied with the elaboration of what is commonly called the “domestic architecture“ of the era, which is quite visible in residential units, urban ensembles and peripheral areas of sites like Matara and Adulis in Eritrea. The ingenuity in local architecture can be discerned from these archaeological sites. Following the demise of these urban centers, the visibility of the vernacular architecture is witnessed in the medieval period where evolved techniques such as the “monkey-head“ building techniques have been fully incorporated in the construction of ancient churches and monastic complexes.

The vernacular houses have rectilinear and sometimes a hybrid of rectilinear and circular shapes. The rooms could be classified according to their functions. The rooms closer to the entrance are commonly used for service functions as cattle or livestock area and straw storage. The other side of the gate comprises the main functional rooms which are the center of the dwelling with their most common use and functions, such as cooking, eating, sitting, sleeping and storage.

As a result of the direct influence of modernity, vernacular architectures have undergone a number of changes over the years. This has led to the emergence of contemporary approaches on buildings. The values of the vernacular architecture, however, are still very relevant to our contemporary buildings. For instance, vernacular architecture uses local eco-friendly materials to address local climatic conditions. With today’s issues of climate change and global warming, it is becoming increasingly clear that there is a need to revisit the use of our local building materials. With some improvements, our local materials can function in the same way as the modern materials, with added advantage of not affecting the environment.

In Eritrea, thanks to the ongoing archaeological research, the history and style of monumental constructions is relatively well understood. However, a detailed architectural study of the monumental structures is still needed. The techniques and forms of the structures were evolving over thousands and hundreds of years. It is predictable that such forms and styles of the vernacular structures were directly related to their local environments. Hence, studying the architectural styles with the aim of incorporating them into our modern construction strategies is essential. This may further help to maintain the cultural evolution and environmental advantages of Eritrea’s ancient monumental engineering. Finally, this can serve not only to preserve our endangered architectural heritage but also to boost the tourism industry.