The Pathway for rinderpest eradication in Eritrea 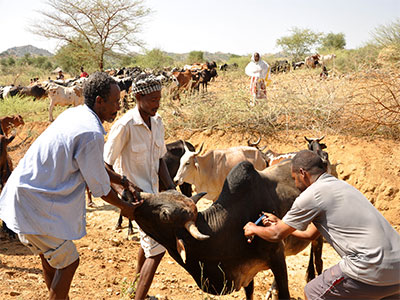 Rinderpest, a viral disease, has a long history. It was known in classical times and appears to have maintained a reservoir of infection on the Russian steppes, from where epidemics periodically erupted to ravage the Middle East and Europe. The disease was brought to sub- Saharan Africa in1889 by Italian troops who came with infected cattle they had imported from India, Aden, and south Russia to feed the troops then occupying Massawa. Indigenous animals, previously unexposed to the disease, lacked immunity and, as a result, succumbed rapidly.

Rinderpest is very highly contagious and manifests itself in fever, restlessness, loss of appetite, blood-stained diarrhea, and often nasal discharges. Some infected animals become maniacal while the great majority are weakened rapidly and die.

Generally, the epidemic seems to gain in virulence as it spreads and the cattle were not the only animals affected. Sheep and goats died, too, and the disease virtually eliminated the populations of buffalo, giraffe and eland that it touched as well as most small antelopes, warthogs, bush pigs and forest hogs.

Rinderpest had caused tremendous amount of losses both in domestic and wild animals since its introduction to Eritrea and, therefore, Africa in 1887.

The consequence of the catastrophe was immense not only in terms of the hunger and death that followed the plague, but in terms of its social and psychological impact.

In Africa, cattle had long been accepted as a form of wealth that endowed their owners with power and authority. Almost instantaneously, rinderpest swept away the wealth of tropical Africa. The pastoralist aristocrats were ruined when out of the herds that had numbered tens of thousands, only a few dozen animals survived.

Herders in Eritrea never forgot the dire consequences and immense lose caused by rinderpest. Fortunately, the Government of Eritrea, in the wake of independence, introduced effective veterinary services across the nation and administered extensive vaccinations for about eight years. Rinderpest was ultimately eradicated from the country.

The experience and achievement in the eradication of rinderpest has impacted the growth in the number of livestock. Thus, the Government continues to give utmost priority to the provision of veterinary services for any viral disease that may devastate the health of livestock.

Dr. Yonas Weldu, head of Animal and Plant Health at the Ministry of Agriculture, highlights the major mitigation activities carried out in Eritrea against rinderpest and the achievement registered in the total eradication of the disease from the country.

In 1992, there was a small outbreak of rinderpest in Eritrea. But due to the mass vaccination campaign carried out in the country from 1991 to 1997 the incidence rate of rinderpest infection went down to negligible size and the country ceased vaccination in November 1997. According to Dr. Yonas, Eritrea annually vaccinated around 800,000 livestock in the period between 1991 and 1997.

In 1999, the country embarked on a five-year World Animal Health Organization (OIE) pathway for rinderpest eradication. The OIE pathway, a step-by-step approach to rinderpest eradication, is followed by nations the wish to declare themselves free from infection. The approach involves following a systematic set of procedures with specific milestones to show that the country has a fully functional animal health service built on an epidemiological surveillance network. It also involves stoppage of vaccinations, intensification of disease surveillance, monitoring and prompt reporting of the findings to World Animal Health Organization.

The Government of the state of Eritrea through the Ministry of Agriculture had been striving to fulfill the World Animal Health Organization requirements for rinderpest eradication. To meet the above obligations, the Government strengthened veterinary services to monitor animal health situation countrywide through the establishment of an effective reporting system. Thus, concerted surveillance activities were carried out in the period between 1998 and 2004.

Based on a comprehensive rinderpest eradication verification and application dossier prepared by the Ministry of Agriculture, the OIE scientific commission for Animal Diseases, at its 75th general session, recognized Eritrea as free from rinderpest (freedom from infection) on a country wide basis. Eritrea was certified free of rinderpest in 2004.

Globally, the 28th of June 2011 is an exceptional day. This was the day when the Food and Agriculture Organization of the United Nations (FAO) with the World Organization for Animal Health (OIE), announced that the world was free from the scourge of rinderpest, making it second only to smallpox as a viral disease to be eradicated globally.