Restoring the ecosystem of Eritrea 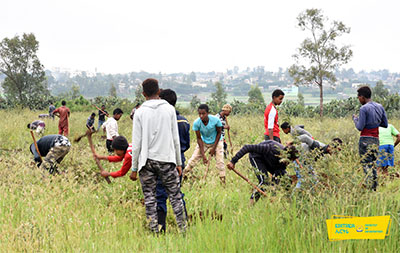 For many years now, the natural setting of the world has been gradually changing into an environment that is less suitable for its habitants. It might already be late now, but it is never too late to take action.

This year, Desertification and Drought day, which focused on the link between consumption and land, was hosted by Korea Forest Service online with a full-day’s programs featuring a variety of exciting event. It was conducted under the theme ‘food, feed and fiber’, underlining the fatal effects the food, feed and fiber industry is posing to the earth.

It all started to go wrong when nations began to develop and modernize, demanding extensive amounts of resources to meet the needs of their people’s new lifestyles. Increased wealth and urbanization are seeking more land for food, animal feed and clothing, which is fiber.

And the productivity of the remaining arable land is declining and the climate is also changing, further contributing to desertification.

According to a statistical report of the United Nations Convention to Combat Desertification (UNCCD), today, more than two billion hectares of previously productive land is degraded, leaving over 70 percent of natural ecosystems affected. By 2050, this could reach 90 percent. By 2030, food production will require an additional 300 million hectares of land and the fashion industry is predicted to use 35 percent more land – which is over 115 million hectares.

Clothing and footwear production causes 8 percent of global greenhouse gas emissions, a figure predicted to rise to almost 50 percent by 2030.

In his address on June 17, 2020, Mr. Ibrahim Thiew, Executive Secretary of the UNCCD, said: “If we keep producing and consuming as usual, we will eat into the planet’s capacity to sustain life until there is nothing left but scraps. We all need to make better choices about what we eat and what we wear to help protect and restore the land.” That way, we can embrace the benefits of the land and ensure our survival. As many scholars agree, desertification and climate change, both individually and in combination, are reducing the provision of dry land ecosystem services and negatively affecting ecosystem health, including losses in biodiversity.

In Eritrea, since most of the people depend on agriculture for their livelihood, land is a center of gravity for most of the government’s policies. For this reason, the Government of Eritrea has been working prudently to improve land productivity and to minimize land degradation. To restore degraded land and improve land productivity, the Government of Eritrea has been taking major initiatives including farm soil and water conservation programs, construction of water reservoirs as well as launching of the Greening Campaign.

In spite of that, Eritrea’s natural location makes it prone to adverse effects of drought and desertification. This natural challenge is aggravated by man-made interferences such as the cutting of trees for fire wood and to expand farm land and overgrazing.

In order to mitigate the effects of drought and desertification in Eritrea, the following actions must be enforced.

Every renovation begins with raising awareness of the public. That is why concerned government bodies have been working to raise people’s awareness about the importance of the conservation of the environment, in general, and the conservation of soil fertility, in particular. That was supported by promoting community-based activities to improve land productivity and by harvesting water from all kinds of sources and using it in improving agricultural productivity.

According to Mr. Fitsum Hagos, Director of Wild Life Conservation at the Forestry and Wild Life Authority, the Eritrean Government has mapped 14 forest and wild life protected land in different parts of the country, including Hawashayt, Nakfa, Dige and Rahrihe. However only six of them, namely, Gash Setit Elephant Sanctuary, Semienawi-Debubawi Green Belts, Dahlak Island Forest and Wild Life Reservation, Ber’asole and Kerkebet, are being actively worked on.

Desertification is caused by many factors that influence one another. They include climate change, the amount of rainfall and soil salinity. However, the factor that is by far the most responsible for the catastrophe is humans’ relentless production and consumption rates. For this reason only humans can put a stop to this by cutting down production or by designing a more eco-friendly means of production.