Prevailing Risk of Locust swarm migration in the Horn of Africa 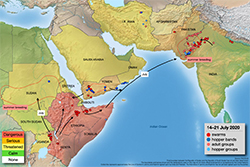 Historically desert locust has been the most dangerous migratory pest that threatens agriculture and food security over large parts of Africa, the near east and south west Asia as well as Arab Peninsula.

Desert locust has a capacity to devastate agriculture and people’s livelihood. Unless an intensive survey and control operation are done as precautionary measures, crops and pastures could be destroyed, with nothing left as the swarms devour everything along their way within a short period of time. As a result, millions of people face shortage of food due to the swarm’s ability to spread very fast and devour large agricultural fields and pastoral lands.

An update on the situation of desert locusts published in Desert Locust Watch Website on 21 July 2020 indicates that in Kenya the number of swarms has declined in the northwest, but it continues to rise in Turkana where aerial and ground control operations are in progress.

Most of these swarms are still expected to migrate northwards to Ethiopia and Sudan via South Sudan. There is a risk that a few swarms may cross the border into northeast Uganda. The scale of the migration of remaining swarms from Kenya is likely to be smaller than previously anticipated due to ongoing control operations.

Also, according to Desert Locust Watch, countries in East of Africa such as Ethiopia, Kenya and Somalia have been carrying out ground and aerial control operations mainly against immature swarms due to the prevailing alarming situation in the region. The report covers the overall desert locust situation in Yemen, Sudan, Oman, Pakistan, India and Iran.

In Yemen, heavy rains have created favorable conditions for continuous breeding throughout the interior as well as in some coastal areas that have given rise to numerous hopper bands and swarms. There is a risk that some of these swarms may appear on the Red Sea coast and breed in areas of recent rainfall. Survey and ground control operations are underway in a few places. No locusts were present in adjacent areas of southwest Saudi Arabia.

Desert locust situation has been very worrisome in large parts of Africa and the risk still prevails in the Horn of Africa. The current situation of desert locust in neighboring countries is highly alarming for Eritrea. Due to a prevailing situation in East Africa, Eritrea has been on track taking necessary measures to get rid of any possible invasion and outbreak of desert locust.

Desert locust is usually restricted to the semi-arid and arid counties that receive less than 200 mm of rain annually and this favorable condition makes such areas susceptible to swarms invasion. Hence, Northern and Southern Red Sea regions of Eritrea are favorable for winter breeding while Western lowlands and small parts of the Southern region are conducive for summer breeding.

Breeding in remote areas and the ability to migrate fast enables desert locusts to rapidly increase in number. Adult locusts can form swarms made up of thousands of millions of individual locusts that exist as a unit. Locusts start forming bands in their nymph or hopper stages and move as a unit. In general most grasshoppers don’t form bands or true swarms.

Locusts fly long distances of 100-200 km a day in steady wind. A dense swarm of 50 million locusts can eat 100 tons of vegetation a day in one km2 of land. Every desert locust can eat a sum of its own weight in fresh food, which is two grams every day, causing severe damage to crops and agriculture. A very small part of an average swarm (in one square kilometer of about 50 million-dense adult locusts) eats the same amount of food in one day that is equivalent to that of 1000 elephants or 2500 camels.

The Ministry of Agriculture (MoA), Regional administration offices and members of the Defense Forces are making concerted efforts to control swarm invasion.

Ms. SelamTeklay, Desert Locust Information Officer from Migratory Pest Control Unit at MoA, said some of the efforts being made include awareness raising campaigns to the general public and to the members of the Eritrean Defense Forces through the provision of extensive training all over the country regarding desert locust control and safety as well as the maintenance of back pack and motorized and vehicle sprayers. Other efforts include the dissemination of brochures, flyers and vehicle stickers as well as documentary films.

The migratory nature of desert locusts is a big threat to a large geographical area in any given country. The transnational nature of desert locusts makes countries in a region to collaborate to combat the threats of such dangerous swarms. Eritrea is a member state of Desert Locust Control Organization of Eastern Africa (DLCO-EA) and the Commission for Controlling the Desert Locust in the Central Region. Member states share data about the occurrence and movement of swarms in a bid to take collective regional measures.

The regular survey and control operations Eritrea undertakes makes it stand out as an exemplary country that receives accreditation by World Food and Agriculture Organization (FAO).

Congress of ENWDVA in Orebro