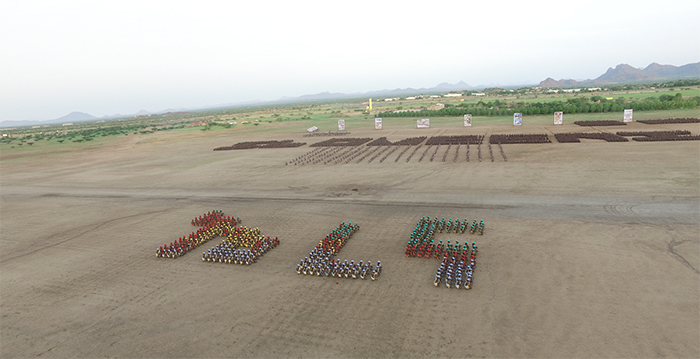 Thousands of Eritrean youth, who make up the 33rd round of National Service (NS), completed the last year of high school and military training, and added to the large pool of their compatriots who graduated before them. The annual graduation activities that take place at the Sawa Training Center keep both young and old, those both in the country, and in the Diaspora who are unable to participate in person, glued to the television screen to watch the ceremonies. The fact that the much maligned training center was not interrupted by the COVID-19 pandemic engulfing the globe, and was able to complete its programs with even greater results, added yet another example of its significance, as a source of resilience of the society at large. The two events, graduation from the technical school and completion of the specific round of national service, are important national celebrations, the magnitude of which is annually evidenced by the presence of President Isaias Afwerki, and other senior Government and Peoples Front for Democracy and Justice (PFDJ) and the public at large although the format was somewhat adjusted this year for obvious reasons.

While the people of Eritrea celebrate the NS, it has become the target of intense vilification and misinformation, and remains the most maligned institution. At the UN Human Rights Council hearing on 16 July 2020, the NSP seemed to be the issue mentioned the most by those who insist on misrepresenting Eritrea. The statement read by Ms. Nathalie Olijslager the representative of the Netherlands was very telling. She said:

“…On behalf of the core group consisting of Australia, Austria, Belgium, France, Germany and Netherlands, I have the pleasure to introduce Resolution L8 on the human rights situation in Eritrea…last year the original sponsors were no longer in a position to present this initiative, the core group stepped in…we are worried with the continued practice of indefinite national service…”

That sentiment was echoed by the representative of Germany, speaking on behalf of the European Union, who also feigned concern for the “indefinite national service”. As for the original sponsors, acting on behalf of the TPLF regime in Ethiopia were Somalia, Djibouti, and Nigeria- the “African faces”. With the TPLF regime removed, the dynamics in the region have changed, hence the change in the stance of the original sponsors. It was clear from the very beginning that it was a politically motivated ill-gotten mandate. As the representative of the Philippines accurately stated:

“…no matter how we frame this resolution, it is a still a resolution that does not enjoy the consent of the country concerned, we must examine the rationale of sustaining this mandate…we call on the Council to avoid being ossified in agendas that have taken a life of their own, out of tune with developments on the ground…we call attention to the fact that mandates on Eritrea have cost nearly 5 million US dollars from 2015-2020 alone…”

She then went on to say that half a million dollars were needed for 2021 for salary and travel, and conference services. These costs do not include the millions spent on the various groups and individuals hired to produce the various reports on Eritrea. A cursory look at the NGOS and individuals that are referenced in the Special Rapporteurs reports and which received funding from western agencies will suffice. Labeling them “human rights defenders” will not hide their true agendas.

Unfortunately, the Special Rapporteurs have not been able to maintain their independence from the pipers, and their reports remain a compilation of unsubstantiated allegations made by the pipers and their anonymous informants.

Eritreans have witnessed these conferences, wherein groups and individuals opposed to the Eritrean government are given platform to disseminate unsubstantiated allegations. Eritreans know about the various campaigns, demonstrations and petitions organized by these individuals and groups, who do not enjoy the support of the majority of Eritreans in the country, or in the Diaspora, where their regime change agenda, using human rights as a pretext, was dead on arrival. As the popular adage says, “he who pays the piper picks the tune”, so it is no wonder then that their reports do not reflect the truth about Eritrea – they are and remain out of tune with developments on the ground. So the chances of the Council receiving accurate and substantiated reports on Eritrea remains a pipe dream-pun intended.

National Service did not begin with Eritrea, and there are many countries that have such programs, and each with its own historical background. As in Eritrea, programs like the National Youth Service (NYS) in Kenya, National Youth Service Corps in Nigeria, and Umuganda in Rwanda, are meant to help foster national unity, promote development in neglected areas, and foster understanding in ethnically and religiously diverse populations. But each has its own unique history and its programs vary. Some have a military component, and some do not. Eritrea believes that in addition to basic skills, academics, technical, discipline, and citizenship, it is the values and principles instilled in the youth that will help them the most in their development.

It is interesting that, in all the 20 years since the signing of the Algiers Agreements between Eritrea and Ethiopia in December 2000, agreements which were witnessed and guaranteed by the European Union, the “core group” voiced little concern for its implementation. Indeed, until 2018, they instead provided the minority regime in Ethiopia the diplomatic, economic, and political support and shield as it flouted international law and the Eritrea-Ethiopia Boundary Commission’s final and binding delimitation and demarcation decisions. For all their repetitive feigns of concern for Eritrea’s youth, they omit the root cause for the “indefinite service”, the belligerence and lawlessness of the TPLF regime that they propped up for 20 years. The damage caused by TPLF and its handlers cost the lives of thousands in the region. It will take time to assess the exact toll and redress the wrongs perpetrated on Eritrea’s youth. In this respect, the ‘core group’, neither have the moral authority, nor the legal mandate to point fingers at Eritrea, the victim of their wrong policies for the region.
Eritrea’s right to self-determination, defense, development and preservation of cultural rightsare all enshrined in the UN Charter, as well as the UN Declaration on Human Rights. Article 27 of the Universal Declaration of Human Right (UDHR) says the following:

“…Everyone has the right to freely participate in the cultural life of the community, to enjoy the arts and to share in scientific advancement and its benefits. Creation draws on the roots of cultural traditions, but flourishes in contact with other cultures. For this reason, heritage in all its forms must be preserved, enhanced and handed on to future generations as a record of human experience and aspirations, so as to foster creativity in all its diversity and to inspire genuine dialogue among cultures…”

The NSP in Eritrea is an intangible cultural asset that should be respected by all. Nobody can define for Eritrea which cultural rites are of importance to Eritrean society, or how they should be practiced. In Eritrea, it is a birth right, a rite of passage, a cultural heritage that needs nurturing and development, not denigration and mal-information. For the few that decide to dodge service, there are thousands more participating with pride and valor. As for results, the world took notice recently.

When the COVID-19 pandemic reared its ugly head, Eritrea’s response for containing and preventing its spread was to pursue a raft of necessary measures including “stay-at-home” guidelines in the entire country. The successful implementation of these measures depended fully on Eritrea’s impressive social capital; on the readiness of the citizens to adhere and respect the guidelines on their volition. There were no rifle slinging, gun trotting law enforcement forces patrolling the streets, nor were people seen defying calls by the government and health officials. The UNDP Resident Coordinator in Eritrea in his May 2020 article explained:

“…COVID-19 has so far defied logic by voraciously impacting poor and rich countries with equal measure. But in Eritrea only 39 infections and zero deaths have been reported so far, this may be largely due to the country harnessing its social capital… In the African context, social capital – also called ‘Ubuntu’, ‘Undugu’ or ‘Ujamaa’ – means the interpersonal relationships and network that give people a sense of identity, shared responsibility and collective accountability…”

Social capital in Eritrea is a result of cultivation and preservation of time tested values and principles engrained in the hearts and minds of all in Eritrean society. It is about expectations and obligations and most of all, it is about trust.

Much has been said about Eritrea’s harmonious culture of ethnic and religious tolerance and respect, but how is this culture nurtured and passed on from generation to generation? How are these values and principles transferred from one generation to another? Social scientists tell us that it is through education, information and social norms that cultures and traditions are passed on from one generation to another. The National Service Program is one way of transferring these national values – intangible national assets, inherited from our forefathers. Indeed, while certain values and principles were refined during the 30 year long struggle for independence, they find historical roots in Eritrean society. But cultural values cannot be preserved and transferred to the next generation without sustained education and nurturing.

In neighboring Ethiopia, UNESCO placed the Gada System in its list of intangible cultural assets. For those who do not know of the Gada system, here is a brief description:

“…Gada is a traditional system of governance used by the Oromo people in Ethiopia developed from knowledge gained by community experience over generations. The system regulates political, economic, social and religious activities of the community dealing with issues such as conflict resolution, reparation and protecting women’s rights. It serves as a mechanism for enforcing moral conduct, building social cohesion, and expressing forms of community culture… Knowledge about the Gada system is transmitted to children in the home and at school…”

Cultural heritage is a representation of our history and our identity; our bond to the past, to our present, and the future, and it is not only limited to material objects that we can see and touch, like the UNESCO World Heritage structures found in Asmara, the Eritrean capital, but also consists of immaterial things like Eritrea’s harmonious culture of ethnic and religious respect and tolerance, and the knowledge and skills transmitted from generation to generation; and, preserved.

Nobody has the right to dictate what is important or beneficial for Eritrea’s development or the development of its people. The people of Eritrea recognize the National Service Program as a birth right, a rite of passage, and a cultural heritage and nobody can decide for them whether or not such practice is part of their heritage, no more than they can decide for them what constitutes as their culture, religion, history etc. High time the world respected the aspirations and wishes of the Eritrean people… and not that of the pipers and their sponsors.