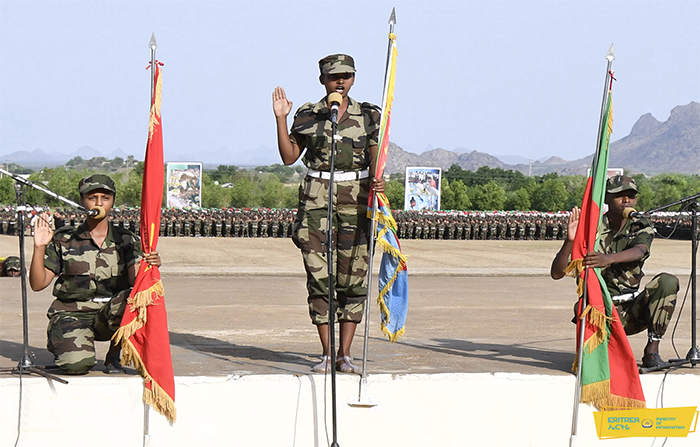 Last week, Eritrea Profile featured an article written by Sara Tesfay titled, “Eritrea’s National Service – A National Rite of Passage” (published on Wednesday August 22). To briefly recap, the article presented a concise, yet critical, examination of howdifferent aspects of Sawa and national service in Eritrea were targeted for heavy criticism by some groups and countries during a recent hearing of the UN Human Rights Council (HRC; held in July 2020). Notably, the perceptive and insightful piece helped to clear up several longstanding misconceptions and incorrect assumptions surrounding Sawa and national service. As well, it raised a number of significant points that are worthy of further consideration and merit deeper discussion. In the following article, I aim to build upon some of key points raised in Sara Tesfay’s article and hope to extend the important conversation that she began.

To begin, in addition to forgetting or quickly dismissing many of the positive, encouraging aspects of Sawa and national service, one of the common features of the HRC discussions and general mainstream coverage of those national programs is that the basic, on-the-groundreality is overlooked. This is aglaring and fundamental problem because it means that the entire – and properly contextualized – picture is not being presented.

It is imperative to keep in mind that although President Isaias Afwerki and Prime Minister Dr. Abiy Ahmed, the leaders of Eritrea and Ethiopia, respectively, courageously signedpeace agreements ending years of conflict and bitter rivalry between their countries exactly two years ago, several considerable challenges remain. While the peace initiatives were almost universally welcomed and broadly applauded, there were – and still continue to be – several deep pockets of discontent.

Unfortunately, almost from the outset, certain elementsin the region sought to scuttle the positive developmentsushering in the possibility for lasting regional peace, stability, and security. These elements, emanating mainly from the ranks of the Tigray People’s Liberation Front (TPLF), which was the central core and the most powerful force within the previous ruling coalition government, the Ethiopian People’s Revolutionary Democratic Front (EPRDF), have opposed the winds of peace and progressive change. Undeniably, this has largely been because the positive developments over the past two years posed a great threat: they would remove their longstanding and tight grip onpower and control. No longer would ruling party elites be “top dog” within the coercive, corruption-plagued, kleptocratic system that they had established andoverseen for nearly three decades. Thus, deeply bitter and extremely resentful about their loss of power and control overlooted state resources; these elements have been unwilling to move in step with the peaceful tide sweeping over the region. Instead, in coordination with several other groups, they have sought to promote conflict, tension, and chaos, hopingthatinstability and violence would row back developments toward peace and allow them to regain some of their formerdominance.

Of course, this allhas a direct influence on the situation on Eritrea. The basic reality is that, notwithstanding the courageous and important peace initiatives of two years ago, as well as the continued motivation to move forward in a spirit of peace and cooperation,parts of Eritrea, including Badme, one of the triggers for the destructive 1998-2000 war between Eritrea and Ethiopia, remain under illegal military occupation by foreign forces. Furthermore, as was recently explained by the International Crisis Group, which can hardly be considered a friend or avid supporter of Asmara, “Eritrea’s international border, which primarily abuts Tigray on the Ethiopian side, remains heavily fortified,” and that Tigray’s security forces have “considerably reinforced in the last year.”

Another interesting point raised in the article is aboutthe lack of credibility and moral authority of some of the groups and countriesthat have been criticizing and scolding Eritrea. A brief look at the historical record providescritical perspective and greater clarity.

In 2018, against a backdrop of growing turmoil, mounting discontent, and widespread unrest in Ethiopia, Hailemariam Desalegn resigned as prime minister. Not long after, Dr. Abiy Ahmed was appointed as his replacement. The charismatic new leader, who promised a more inclusive form of politics, while calling for tolerance and reconciliation, quickly pursued a reformist agenda.

The wide-ranging reforms also extended to dramatically shift the country’s longstanding policy toward Eritrea, its long time regional foe.In June 2018, months after coming to power, Abiy announced that Ethiopia would finally unconditionally accept and fully implement the UN-backed Eritrea Ethiopia Boundary Commission (EEBC) ruling of 2002, thus totally breaking with the hard-line, intransigent policy of previous Ethiopian governments. Soon after, the leaderships of the two countries were meeting and agreeing to peace.

So where exactly do the issues of credibility and moralauthority arise? Well,theprevious regime, the TPLF, which refused to accept the EEBC, thus violating international law, and which was the perpetrator of the many crimes and injusticesduring the preceding era,was heavily backed and supported by many of the same groups and countries now condemning and criticising Eritrea.

It would seem that if these groups and countries were sincerely so concerned about Eritrea or Eritreans, they would have genuinelycriticized and taken tangibleactions against the TPLF during its decades of military occupation of Eritrean lands and policy of unrelenting aggression. Moreover, while these groups and countries have beenadept at criticizing, scolding, and questioning, shouldn’t they themselves have to answer some difficult questions about their own longstanding apologism, appeasement, and support for the previous regime, whose horrors were an open secret? Shouldn’t their longstandingpolicy of support for the TPLF be a source of shame and huge controversy, if not at least discussion?

Another interesting point mentioned in Sara Tesfay’s article was the sheer costs associated with the HRC’s mandates on Eritrea in recent years. Specifically, she referenced the fact that, “mandates on Eritrea have cost nearly 5 million US dollars from 2015-2020 alone.” She alsonoted thatabout “half a million dollars were needed for 2021 for salary and travel, and conference services. These costs do not include the millions spent on the various groups and individuals hired to produce the various reports on Eritrea.”

These substantial figures arouse some interesting questions. One is what has been the result of the expenditures?Another is whether anyreasonable, objective, well-informed person could conclude that there have beeneven paltry good results from these costly processes for the subjects of so much ostensible concern?

Finally, a humble recommendation: cooperation and engagement will work far better than isolation or confrontation and condemnation. Eritrea is a country that emerged out of a long, difficult struggle for human rights. Ithas achieved great progress in some areas and remains vigilant and steadfast in its efforts to implement all civil, cultural, economic, political, and social rights for all Eritreans. Like all countries, of course, Eritrea also faces human rights challenges, and it has not failedto recognize that agreat amount work remains ahead. However, the path forward must be based on constructive engagement, cooperation, and genuine dialogue.

Oneclear, pertinent example of the merits and wonderful results possible through cooperation and engagement is Eritrea’s success in health, education, and development – all of which are fundamental human rights.Just last year,Dr. Josephine Namboze, the then WHO country representative in Eritrea, commented that “As Eritreans, this [development achievements] might not surprise you, but, for me, coming from a foreign country, it is mesmerizing and I wish that people from other nationalities would come and see what is being done here and get inspired.” She also went on to state, “I am privileged to be here and witness all the great works that the country was able to do…I think if other countries could learn from Eritrea’s experience and work in strengthening their community’s involvement in everything, they would succeed in getting the same results. Eritrea needs to share its great experiences with other countries. I feel it isn’t being adequately shared.”

September 1st: a Road to Liberty and Dignity