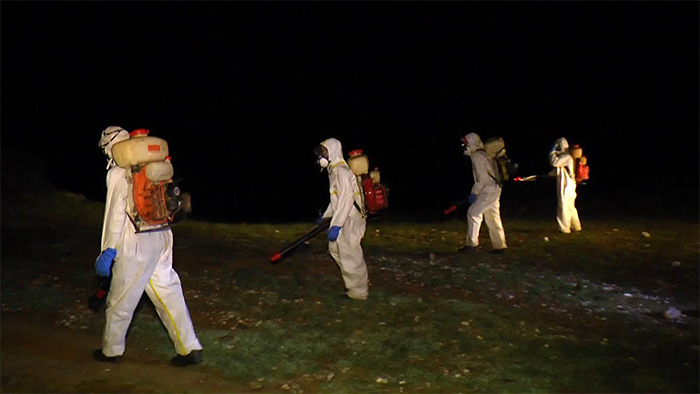 Eritrea is carrying out intensive desert locust control operations. These intensive operations commenced on 23 August last month and continued without let up at our press time.
Desert locust swarms first appeared in the Northern Red-sea region in Sub-zones of Afabet, Foro and Sheeb last week. The locust swarms originated from neighbouring countries and spread to almost the whole country.

Until September 1, 2020, around 450 hectares of land infested with desert locust swarms have been put under control in Sub-zones of Gindae, Foro, Sheeb and Afabet.

So far, more than 700 hectares of land infested with the locust swarm in a number of villages in Sub-zones of Serejeka, Berik and Akria have been treated; control operations are still in progress.

Some villages in Sub-zones of Senafe, Dekemhare and Debarwa were affected by locust upsurge; successful control operations conducted.

Locust swarms still persist in the Sub-zones of Adi-tekliezan, Elabered, Habero and Geleb. So far, a total of 300 hectares have been treated and control operations are underway.

Logo-Anseba Sub-zone is so far the only Sub-zone of the largest region in the country infested with locust swarms. In this Sub-zone, intensive surveillance work is in progress.

Hopper bands appeared in some administrative areas of Central Denkalia and Araeta Sub-zones. Even though the areas affected are not that big, immediate control interventions are ongoing.
In many locust infested areas of the country, participation of farmers remains high and commendable. The farmers are indeed mobilizing all their resources including private vehicles and other logistics to bolster government efforts.

The combined result of these concerted efforts is reflected in the avoidance, so far, of any significant damage to crops and range lands all over; irrespective of the size of the swarms.
The purposeful and training programmes and capacity building measures that the Ministry of Agriculture has pursued since the beginning of the year has undoubtedly borne fruit. Among other things, training on maintenance and repair of sprayers was given to 76 operators while E-Locust/ GPS Training was given to 73 other experts.

In addition, more than 12,600 members of the military and the farming community participated in practical training programs with focus on Desert Locust management and pesticides safety throughout the country.

The Ministry also undertook maintenance work for more than 960 manual and motorized sprayers. The equipment was deployed in the current desert locust swarm control operations.