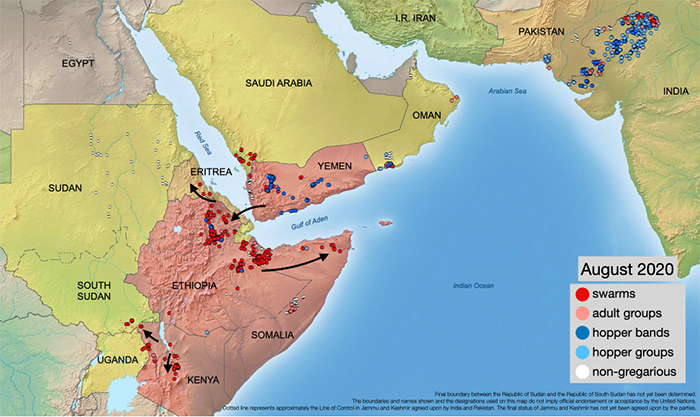 As the threat of swarms’ invasion has been worrisome, particularly for the last nine months, the Ministry of Agriculture (MoA) has intensified its preparedness to combat possible invasion. More than 10 new desert locust stations have been set up in the Gash-Barka and Southern regions in addition to the permanent stations in the Northern Red Sea region. A very recent appearance and invasion of desert locust swarms from neighboring countries in the Northern Red-Sea region such as in Afabet, Foro and She’eb sub-zones has spread almost throughout the nation. For this reason, Eritrea began intensive desert locust operations on August 23 and the task continues to date.

Periodic and timely reports from different regions illustrate that coordinated efforts by the MoA, members of Eritrea’s Defense Forces and Local Administrations have largely succeeded in controlling the infestation so far.

Reports from the MoA indicate that until 1 September 2020 around 450 hectares of land infested with desert locust swarms was put under control in Ghindae, Foro, Sheeb, and Afabet sub-zones in the Northern Red Sea region while more than 700 hectares of land infested with the locust swarm in Serejeka, Berik and Akria sub-zones in the Central region has been treated with pesticides with operations still in progress. 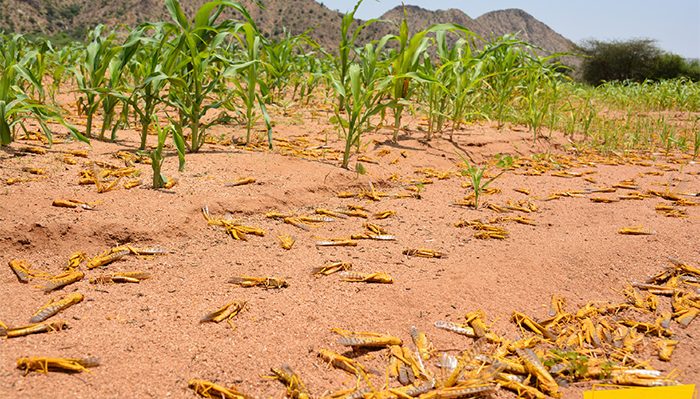 The situation in the Southern region, particularly Senafe, Dekemhare and Debarwa sub-zones, was characterized by increased infestation which was deterred through successful control operations. Meanwhile, persistent control operations are underway in Adi-tekliezan, Elabered, Habero and Geleb sub-zones in the Anseba region to fully control the infestation. So far, a total of 300 hectares of land has been treated in the affected areas of the region.

Although the situation in the Gash-Barka region is generally calm, Logo-Anseba sub-zone of the region is infested with locust swarms and intensive surveillance work is in progress.

Locust swarm condition in the Southern Red-sea region has been insignificant. Although a report from the MoA reveals that hopper bands appeared in some administrative areas of Central Denkalia and Araeta Sub-zones and the areas affected are not that big, immediate control interventions are going on.

Since the risk of invasion is still high due to the situation in most East-African countries, the Government of Eritrea continues operations to control swarms that migrated into Eritrea in some part of the Southern, Central, Anseba, Gash-Barka as well as Northern and Southern Red Sea regions. 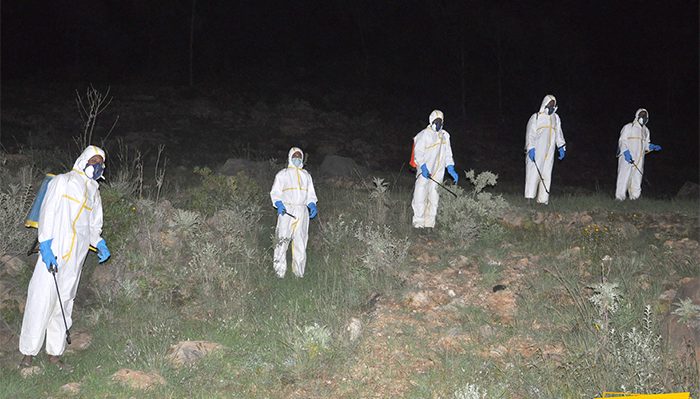 Aware of the alarming threat, the MoA continues to provide on-the-job training to staff members besides taking other measures of preparedness, including its ongoing awareness raising campaigns aimed at the public. These efforts are evident in the participation of communities and farmers in all locust infested areas of the country.

According to a report from the MoA, participation of farmers remains high and commendable. Farmers have been mobilizing all their resources, including private vehicles and other logistics, to reinforce government efforts.

The MoA further reports that the combined result of these concerted efforts is reflected in the avoidance, so far, of any significant damage to crops and lands all over irrespective of the size of the swarms.

The training programs and capacity building measures that the MoA has pursued since the beginning of the year have undoubtedly borne fruit. Among other things, training on maintenance and repair of sprayers was given to 76 operators while E-Locust/ GPS Training was given to 73 other experts.

In addition, more than 12,600 members of the military and the farming community participated in practical training programs with focus on desert locust management and pesticides safety throughout the country. 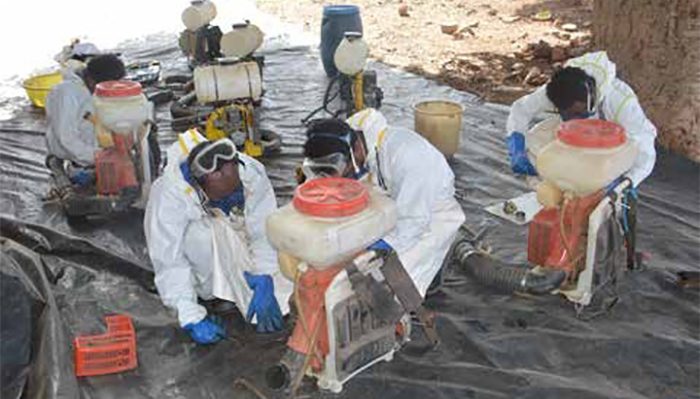 According to a new report by Desert Locust Watch, locust infestation is still worrisome in East Africa and vast areas of the Middle East and Far East. The report shows that several mature swarms invaded Eritrea and spread throughout the highlands and the Red Sea coast where good rains fell in August. Swarms from Yemen invaded southwest Saudi Arabia, some of which reached the Red Sea coast near Jizan. On 31 August, a swarm moved from northwest Kenya to adjacent areas of Budi district in Eastern Equatoria and South Sudan. In southern Oman, adult groups and a swarm formed from local breeding on the coast.

The Desert Locust Watch also predicts that locust infestations are expected to increase substantially in Ethiopia, Eritrea, Yemen and, to a lesser extent, on the Red Sea coast in Sudan and Saudi Arabia where numerous hopper bands could form in September. While the situation remains calm in the northern Sahel from Mauritania to western Eritrea, where good rains fell much further north than usual last month, only small-scale breeding is expected because current locust numbers are very low.

Thanks to the preparedness and extensive work by all concerned bodies, the spread of desert locust has been contained in the areas where the invasion occurred. Like in the previous control operations, Eritrea has deployed vehicle-mounted, manual and motorized sprayers. The Government, communities and members of the Defense Forces have made unremitting efforts to contain the spread of desert locust and deter the dire consequences. Operations are still underway in areas where the threat is still prevalent and, hence, the MoA is carrying out intensive surveillance in suspected areas to detect and control any further spread of locust swarms.