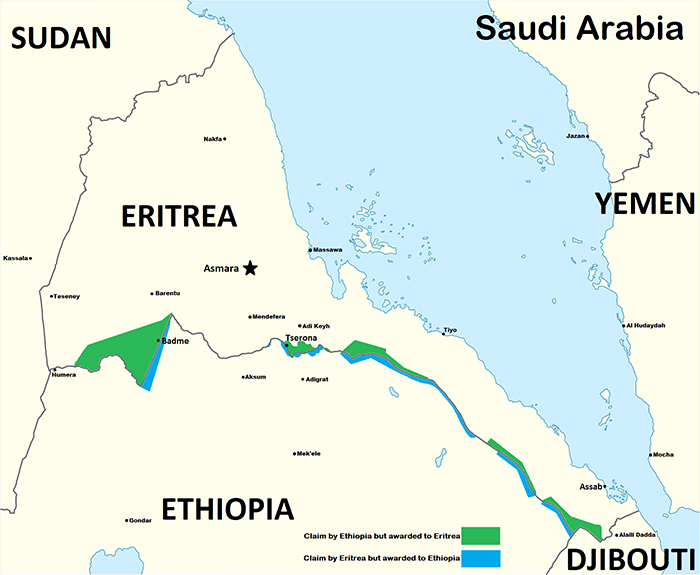 Last week, on 5 September, the BBC’s Tigrinya online platform featured an article titled, “Why there are fears that Ethiopia could break up”. As suggested by the title, the article mainly focused on the various internal challenges recently faced by Ethiopia and whether these could lead to a disintegration of the country. However, in several parts of the article there were references made to Eritrea that were highly problematic and plainly wrong, constituting a huge disservice to readers. Unfortunately, this is not the first time that BBC or BBC Tigrinya has published problematic articles or claims. For years, the media organization (and much of the mainstream and Western media) have misrepresented Eritrea (as well as many other countries in Africa and the Global South), distorting or omitting facts, demeaning Eritrea’s narratives, and featuring biased, highly flawed reports. In the following article, I will try to dispel the latest distortions and put some of the misinformation to rest.

At the outset, to avoid any potential misunderstandings, allow me to state that peace is a fundamental imperative in the Horn of Africa. We should all be genuinely working for peace, cooperation, and development for and between the countries and peoples of our region. The historic moves toward peace and cooperation that have unfolded in our region in recent years are extremely positive and have been extremely exciting. They should continue to be strengthened and consolidated.

To return to the topic at hand here, in one section of the BBC Tigrinya article, the author states that, “Tens of thousands were killed in the [1998-2000] conflict after Eritrea launched an offensive to gain control of the town of Badme from Ethiopia’s Tigray region.” The problem here is not only that the author fails to provide an adequate chronology of events or offer proper contextualization and background, he leaves readers with the impression that Eritrea triggered the conflict, and that the conflict was about Badme only , which are false.

The reality is much different. Eritrea won its independence from Ethiopia in 1991 after waging one of the longest national wars for liberation in modern African history. After its outright military victory over Africa’s largest, best-equipped army in 1991, the Eritrean People’s Liberation Front (EPLF) quickly began preparations for a referendum to allow the Eritrean people to finally determine their political future. Two years later, in 1993, Eritrea was formally welcomed into the international community of nations as Africa’s fifty-second nation-state after an internationally-monitored referendum in which Eritreans overwhelmingly voted in favor of independence.

Upon independence, with minimal foreign aid or external influence, Eritrea embarked upon the monumental task of reconstructing and rebuilding its war-shattered country and economy. Despite the sheer scale of the challenge, the early signs were promising and the period was marked by considerable progress and high levels of joy and optimism. Notably, led by the People’s Front for Democracy and Justice (PFDJ, which replaced the EPLF in 1994), Eritrea shared particularly close relations and warm ties with the new government in Ethiopia.   The Tigray People’s Liberation Front (TPLF), was the dominant political organization within Ethiopia’s four-party coalition government (EPRDF) with whom the EPLF had cooperated to overthrow the Mengistu Haile Mariam regime in 1991.

The two countries established joint commissions and a mutual defense pact, and enjoyed strong political and security relations. Social, cultural, and economic ties between Eritrea and Ethiopia were also robust. The countries maintained an open border, leading to high levels of cross-border trade, commerce, and movement of labor. Eritrea’s top trade partner was Ethiopia, and the latter used the Eritrean ports in Assab and Massawa at symbolic rates and without any hindrance.

However, despite the warm relations and close cooperation, problems steadily began to arise. On numerous occasions, TPLF militias and authorities took aggressive actions against Eritrean farmers and civilians in the border regions. These militias and authorities often confiscated land and property, accusing Eritreans of trespassing into Tigrayan territory. Notably, during some of the incidents, of which there were many, there was a loss of lives. In their excellent work, Blood, Land, and Sex, published in 2003,Favali and Pateman describe, “From as early as 1990, when the TPLF took Tigray from the Dergue, border incidents increased in ferocity. The TPLF’s tactics were reminiscent of those followed by the old Abyssinian rulers: first of all, it attempted to tax the Eritreans living near the border and force them to pay tribute. When the villagers refused to do so and complained to the Eritrean authorities, the TPLF/EPRDF began to use force.”

Despite the clear and longstanding evidence of Eritrean sovereignty in the area, the incidents continued to occur and even intensified. In July and August of 1997, the Ethiopian military entered into the areas of Bada and Badme, expelling locals and dismantling the Eritrean administrations. Additionally in 1997, Tigray released new official maps, images of which were then also emblazoned on new currency notes, which had redrawn longstanding internationally recognized boundaries to incorporate large parts of Eritrea and adjacent Ethiopian regions.

Although Eritrea was naturally heavily concerned by the unfolding of these events, it sought to contain things and resolve everything peacefully. On several occasions, local Eritrean officials and administrators met with their Ethiopian counterparts to express their concern and propose a peaceful solution. In August of 1997, Eritrea’s President, Isaias Afwerki, sent two respectful letters to the Ethiopian Prime Minister to protest and express concern about Ethiopia’s actions. He also expressed restraint and suggested the establishment of a joint border commission to resolve the situation. Eventually, a joint commission was created, comprising of high-level government officials from both countries. It held its first meeting in November 1997 in Asmara and planned to meet after several months.

However, in the meantime, incidents in the border regions continued to occur and Ethiopia took more Eritrean territories under its control. On 6 May 1998, before the second meeting of the joint high-level border commission, Ethiopia launched a carefully planned attack on Eritrean armed patrols on routine duty in the Badme region. A number of Eritreans were killed. This incident set-off a chain reaction on both sides, ultimately culminating in the Ethiopian Parliament accusing Eritrea of aggression in Badme, and then declaring war on Eritrea on 13 May 1998.

Contrary to the claim in the article, which gives readers the wrong impression, the conflict was not caused by Eritrea. Rather, it was the result of the “TPLF’s persistent incursions into Eritrean territory, an act that can only be explained in terms of the expansionist tendencies of that Front’s leadership” (Tesfai 1998).  Of course, the previous ruling regime in Ethiopia had frequently made claims to large territories that were long recognized as Eritrean. That Badme was not the main or central issue for the war is further evidenced by the Ethiopian military’s build-up at Zalambessa, the Assab border, and elsewhere along the boundary with Eritrea.

In another part of the article, the author claims, “Nor has the status of Badme been resolved.” This is actually false. The status of Badme is clear: through the Eritrea Ethiopia Boundary Commission (EEBC), an international arbitration process, the status of Badme was decided in April 2002 at the Permanent Court of Arbitration in The Hague. The EEBC’s final and binding ruling determined that Badme is a part of Eritrea. It is thus an Eritrean town that remains under an illegal military occupation by foreign forces.

These are the indelible facts. In the end, undoubtedly, the conflict was a grave and avoidable tragedy to both countries.  It began a long, dark chapter in relations between both countries and had immeasurable costs. As noted at the outset of the article, the initiatives for peace and cooperation that have unfolded in recent years have been exciting and positive. We all have the obligation and responsibility to build upon and strengthen them in order to move our people, countries, and the region forward.

Straightening the facts about Logo. . .