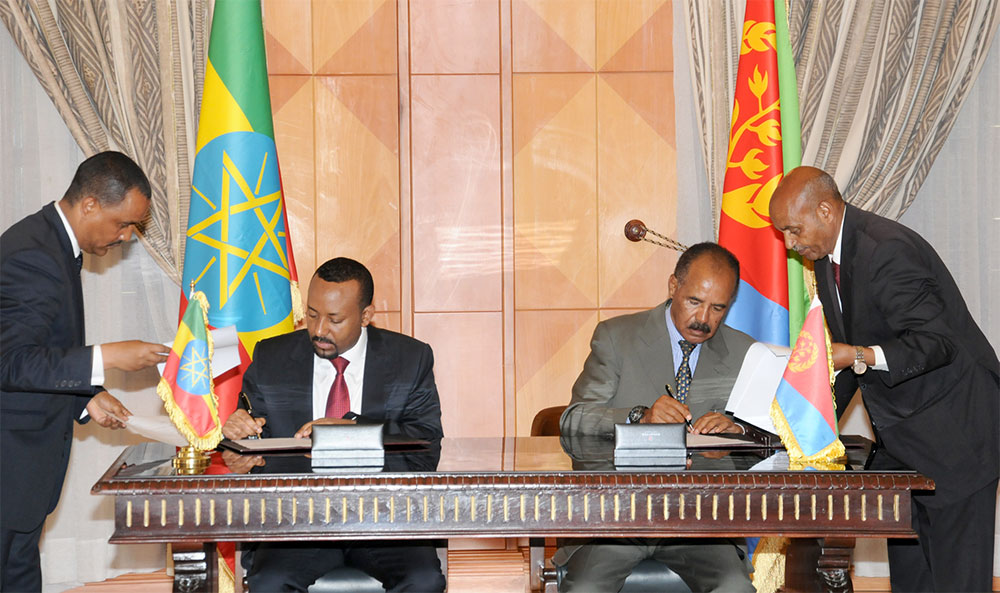 In several days the world will observe the International Day of Peace (IDP). The United Nations General Assembly (UNGA) set 21 September as the IDP in 1981 a unanimous resolution. Two decades later, in 2001, the UNGA would unanimously vote to designate the IDP as a 24-hour period of non-violence and cease-fire. Recognized annually and globally, the IDP is devoted to overcoming differences, promoting tolerance, and strengthening the ideals of peace. With the IDP only a few days away, and in light of the momentous regional developments for peace and cooperation that have unfolded in recent times, it is a useful opportunity to discuss several important points about peace and note how they may apply in relation to Eritrea. Recall that just two short years ago, in July 2018, Eritrean President Isaias Afwerki and Ethiopian Prime Minister Abiy Ahmed signed the Joint Declaration of Peace and Friendship, in Asmara. The agreement ended the long state of war and hostility between the two countries and opened an exciting new era of peace, friendship, and comprehensive cooperation.

To begin, peace is a fundamental requirement for driving economic growth and it is critical for sustainable development. At the same time, of course, development also provides firm ground for durable peace. The great overall significance of peace, as well as its close interrelationship with development, is reflected within the UN’s Sustainable Development Goals (SDGs). The SDGs, you may recall, are a global set of goals for all countries – low-, middle-, and high-income – to meet by 2030. Numbering 17 in total, the SDGs were adopted by world leaders in September 2015. SDG-16 focuses on promoting peaceful and inclusive societies for sustainable development, aims to reduce all forms of violence, and proposes that governments and communities find lasting solutions to conflict and insecurity.

In terms of Eritrea, this strong association between peace, growth, and development is clearly illustrated in the country’s trajectory and experiences immediately after independence (specifically, from 1991 until the outbreak of war with Ethiopia in 1998). Upon independence, with minimal foreign aid or external influence, Eritrea embarked upon the monumental task of reconstructing and rebuilding its war-shattered country and economy. Despite the sheer scale of the challenge, the early signs were promising and the period was marked by high levels of optimism. Numerous schools, hospitals, dams, and other infrastructure were rehabilitated or constructed, access to water, telecommunications, education, and healthcare were improved, and a large-scale demobilization of the country’s armed liberation forces was begun. Additionally, from 1993 to 1998, some economic diversification was achieved, inflation was kept relatively low, and gross domestic product grew at an average rate of about 11 percent (according to World Bank data).

A 2001 study of Eritrea’s socio-economic developments during its early post-independence period effectively captured the improvements and progress made in the country, concluding that,

“With the Derg’s overthrow in 1991, Eritrea embarked on the construction of a new state. A Constitution was drawn up and promulgated, and the basis for a participatory political system was laid out. New economic institutions were created, and considerable reform undertaken. Problems in coordinating reform and reconstruction were largely avoided, mainly because of the institutional ‘clean slate’ facing the country at independence and the high level of social solidarity and other social capital that characterize the country. A well-defined economic strategy, and careful use of aid, promised higher returns to investment (and fewer unsustainable projects) than found elsewhere in Sub- Saharan Africa. By the start of 1998, the country had achieved much in a short time, and the basic structures of a development state were well-advanced” (Hansson 2001).

The country’s considerable progress during the period of relative peace and stability was also demonstrated through its significant improvement upon the UN Human Development Index (HDI), a multidimensional measure of human development which scores countries on a scale between 0 and 1 (with scores closer to 1 representing higher levels of development). Between 1994 and 1998 the value of the HDI for Eritrea increased from 0.269 to 0.402 and its international ranking jumped from 168 to 159.

This brief review demonstrates extremely well how peace is an essential precondition for a nation to thrive. With relative peace and stability, and without having to divert precious human and financial resources away from its various national development programs, Eritrea was able to promote socio-economic growth and development. Thus, the recent developments toward peace offer great potential and provide a basis for optimism. Peace can help to reinforce the conditions for sustainable development and will liberate the vital resources needed for growth, poverty reduction, and development.

The second important point to keep in mind is that while they were bold, courageous, and visionary, in addition to catching many people by sheer surprise, the recent initiatives for peace and cooperation taken by Eritrea and Ethiopia were only the first initial steps in what is a long and difficult road. Without wanting to downplay the undoubted importance of the agreements, peace is not a solitary event and it does not arise from the act of putting pen to paper. Nor can peace simply be seen as the absence of violence or as a linear and straightforward process. Rather, lasting peace is difficult and hard, in addition to being complex and dynamic. It is a continuous process that often evolves and requires patience, vigilance, conviction, and constant cultivation. The reality is that peace often necessitates a long period of time and effort before its full and true benefits are realized. Notably, this is borne out by numerous examples from our own region, across our continent, and elsewhere around the world.

However, this has not been fully understood or has been willfully ignored by those who have been expressing unrelenting negativity, cynicism, and deep doubts about the region’s moves toward peace – some from as early as when the ink from the original signatures for peace was yet to dry. We should all recognize and readily expect that there will be immense challenges ahead and considerable work will have to be completed. And in any case, what has been achieved so far is impressive by any standards – in its own merits as well as in comparative terms with other contemporary events. Here we should also not forget that several negative elements and hostile forces (albeit small in number) have actively worked to counter the positive developments because they believe that they stand to win or gain from instability, insecurity, tension, and conflict.

The fact that the road will be long, and the bumps that we have hitherto encountered, should only augment our resolve to leverage the demonstrated political good will in both countries to plough ahead in the coming months. This is our collective obligation and responsibility. Peace is an indispensable objective that our peoples need and deserve, and challenges and obstacles only mean that we all need to redouble our efforts and strengthen our resolve.

“ There may be a bad person but there never is a bad land” Mr. Oqbay Tela