Poverty is not a virtue! 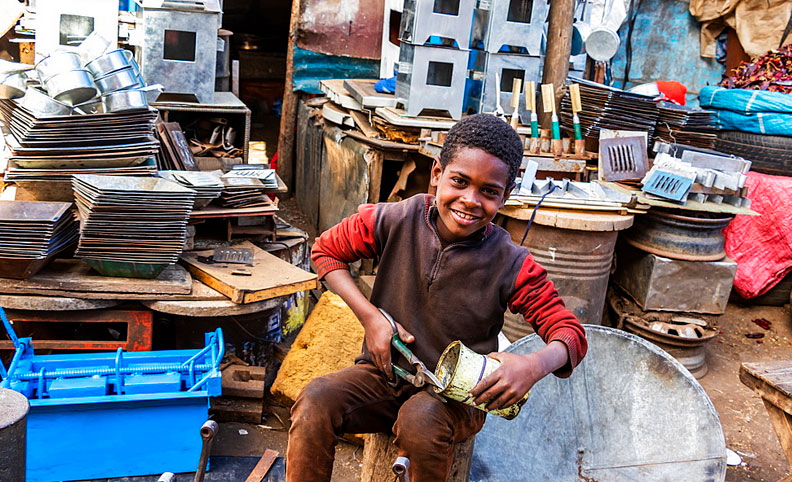 Some people think the easiest way to make money quickly is to steal it, and the simplest way to get poor is to get robbed. These individuals apparently kept the fundamentals of Marxism under their pillow for a deeper study of this principle.

It is believed, rather idiotically I might add, that honest people rarely get rich and poverty was after all a divine virtue. But poverty becomes a problem when it is equated with virtue that guarantees everlasting life. The poor are said to be nearer to God than the rich as if man was created to remain destitute on this planet. The poor will always be in your midst, says the Good Book. Who are these poor people? How do they become poor? Are they predestined to remain poor or are they poor because they wish it?

Medieval Europe gave its blessings to poverty and outright pauperism and out of its magnificent and wealthy cathedrals stepped out professional paupers such as the Franciscan Order who begged for their meals and walked barefoot in this world for a better life in the next. Monasteries became institutions for practicing austerity and self-mortification. Wealth, which was associated with mammon, was to be shunned. Better to be a pauper in heaven than a prince in hell.

It was probably the advent of the Protestant movement in the 16th century that made the shift in thinking. Work was made equal with prayer. That meant that the more you prayed (worked) the richer you got. So wealth became the wages of work and not the wages of sin.

The emergence of the bourgeoisie vice with its adherents was classified as failures in this life and hereafter.

Have you ever been to the semi-slum areas of Asmara? Look into the defiant eyes of the children there. You can see poverty reflected deep inside, material poverty, but you can also see a wealth of non-material type. It consists of hope against despair, and fortitude in the face of adversity.

These people did not seem to me to have accepted their poverty. They knew something was amiss and they had to do something to remedy the problem. I found those children to be more mature than those who live in downtown Asmara. Even more optimistic.

I think poverty should be defined as the state of being subdued by material and spiritual forces. It comes as a result of giving in to psychological and physical vicissitudes followed by the feeling of satisfaction in this new mental state where destitution becomes bliss and poverty is accepted as one’s earthly lot.

Poverty and wealth may also be described as states of mind that rise and fall in accordance with the material success or failures of our acquaintances. Your neighbor suddenly buys a new car, and you feel poorer all of a sudden. The same neighbor gets bankrupt and sells his house, and you feel a bit richer than before.
But, generally speaking, poverty is not alien to our culture. We have even institutionalized it by founding monasteries and convents and enshrining it in our folktales, proverbs and songs. The rich are not considered successful businessmen but robbers even if they get the money by legal means.

Religion and the traditional culture of poverty play a great role in obstructing any sort of positive mental shift. Eritreans are very frugal and prefer to stay lean. A big belly and a strong appetite for food and drinks are frowned upon by society. “Live frugally and remember your God” is the motto. Eating too much makes one forget his Maker so much so that those who get rich all of a sudden have some sort of guilty feelings.

That may be one of the reasons why they have churches and mosques built in their names or in the names of their favorite saint in their home villages.

In some ways, those who exalt poverty may be right if by poverty they mean the lack of material things alone.

It seems that some people voluntarily wish for spiritual wealth. The choice to suppress the one in favor of the other is also everybody’s right. Everyone has the right to remain poor (in its mystic sense) if one so wishes.

What is unacceptable, however, is the philosophy that preaches that poverty is a virtue that leads to Nirvana based on the divine assertion that it is easier for a male to pass through the eye of a needle than for a rich man to go to heaven.

Poverty should only be a choice not a requirement for righteousness. Because if it is taken as a virtue, it assumes a divine proportion and can, therefore, bring about indolence and fatalism along with it and may cause mankind to sink into a level of mendicancy even lower than that of animals. Nay, animals do not beg, except in zoos and in circumstances created by man’s invention. The most abject of men is the one who sits and begs, says a Parisian seer.

The policy of our Government to narrow the gap between the poor and the rich is very commendable. We, Eritreans, have, among other qualities, this good one that we hate to beg. We are rich mentally and spiritually.

…..There is Always a Way