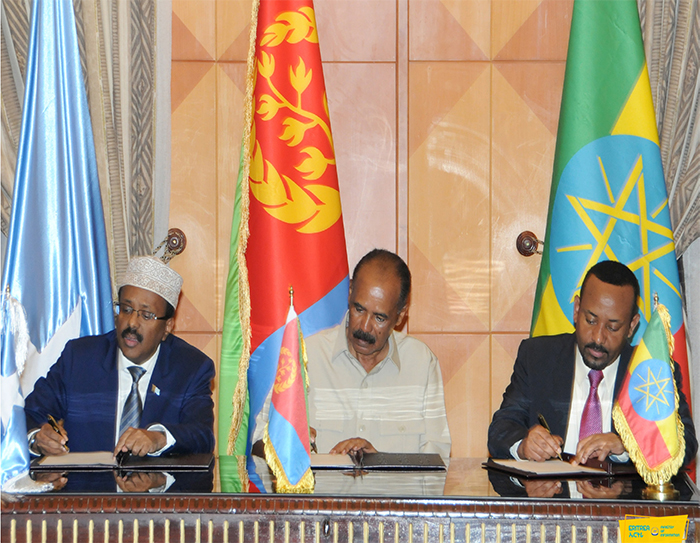 Last week, the popular website AllAfrica.com featured an article titled, “US-Ethiopia Relations Take a Wrong Turn”, authored by Johnnie Carson, who served as US Assistant Secretary of State for Africa from 2009 to 2012 during the first Obama administration and is a former US ambassador to Uganda, Zimbabwe, and Kenya. The article strongly criticized the Trump administration’s recent decision to suspend and delay development assistance to Ethiopia over the latter’s filling of the new Grand Ethiopian Renaissance Dam (GERD). In the course of criticizing and arguing against the Trump administration’s decision, the author made several claims about Eritrea which merit further discussion.
Specifically, Carson warned that: “If Ethiopia becomes distracted by internal conflict, Al- Shabaab terrorists in neighboring Somalia could expand their activities in Ethiopia’s large Somali region. And Eritrea, which has a history of regional conflict and covert interventionism, could take advantage of the situation to destabilize Ethiopia and increase its regional influence.” For a relatively brief statement, there are a fair number of problems and issues to unpack.

To begin, the warnings about destabilization and interventionism are ironic, if not mighty rich, coming as they do from an American official. A quick look at the historical record shows clearly just how destabilizing and interventionist the US has been in many parts of the world over many decades.
In terms of the applicability of the claims against Eritrea, it is well to note the country’s long-standing general foreign policy and approach. In brief, it may be described as being anchored on the promotion of a safe and cooperative neighborhood. Since its independence, the country has always strongly believed in non-interference in the domestic affairs of other states, respect for sovereignty, the peaceful settlement of disputes, and the strict adherence to international law. Moreover, Eritrea’s longtime general principles and goals include: “to become a respected member of the international community, by coexisting in harmony and cooperation with its neighbors; and by contributing, to the extent of its capability, to regional and global peace, security, and development.”

It is certainly true that Eritrea has only just emerged from decades of destructive conflict and a tense “no peace, no war” stalemate. Recall, too, that previous US administrations played a role, generally negative, in those events. However, one must bear in mind that war has never been the desire or preference of Eritrea. The country was forced to take up arms in order to defend its territorial sovereignty and maintain its hard-won independence. At this point, after decades of war, illegal sanctions, numerous challenges, and various setbacks, and after having paid an enormously high price in national blood, treasure, and lost opportunities, Eritrea is focused on peace, development, and cooperation. It does not view the situation as a zero-sum game or an opportunity to gain benefits at another’s expense. It recognizes how the fates of the countries of the region are closely linked, and understands that peace and cooperation will allow all to reach greater heights.

Notably, the article’s claims about interventionism and destabilization are essentially regurgitations of the ones that were regularly made against Eritrea by previous US administrations, including the one in which the author of the article served. However, rather than being rooted in truth or based on solid evidence or fact, the claims were politicized smears used to help gather support for international sanctions against Eritrea. The latter were engineered by the previous US and Ethiopian governments in order to punish Eritrea for a) refusing to yield its position and the legal course on the Eritrea Ethiopia Boundary Commission ruling, thus thwarting a key imperative for the former US administration’s “regional enforcer” and proxy, Ethiopia, and b) for Eritrea’s open and candid criticisms of flawed US policies in the Horn of Africa.

Finally, the Ambassador is correct to identify the dangers posed by Al-Shabaab. The militant Islamist terror group, responsible for so much violence, death, and destruction in the region, can only be denounced and condemned in the strongest, most withering terms. But it is particularly interesting to explore the rise of the terror group and recount how we got here. Specifically, the group’s emergence and growth can be traced back to the late-2006 US-backed Ethiopian invasion of Somalia. The invasion, ostensibly undertaken to prevent Somalia from becoming a source of terror and a safe haven for terrorists, actually led to the growth of violent extremism and an increase in terror threats in the region.
Notably, at the time, many parts of Somalia, including Mogadishu, were in the midst of the most sustained period of relative peace, order, safety, and stability that the country had seen for years. However, after the ill-advised US-backed Ethiopian invasion, which violated UN Security Council Resolution 1725 and resolutions or governing principles of regional bodies, Somalia, much like Iraq after the US invasion not long before, became a magnet for terrorists from around the world and a key hub of terrorist operations.

Although the fierce resistance and insurgency in Somalia were comprised of a broad array of local groups and elements, Al-Shabaab emerged to become the most potent military force. Flourishing in the midst and aftermath of the brutal invasion and occupation, Al-Shabaab morphed from a small, relative “non-player” in Somalia, with weak links to Al- Qaeda, to eventually pledging its allegiance to the global terrorist organization and becoming one of the most powerful and devastating terror groups in the region.

In the end, while the Ambassador’s criticisms about the Trump administration’s recent moves may or may not be correct or legitimate, the claims made about Eritrea hold little water and are not quite accurate.