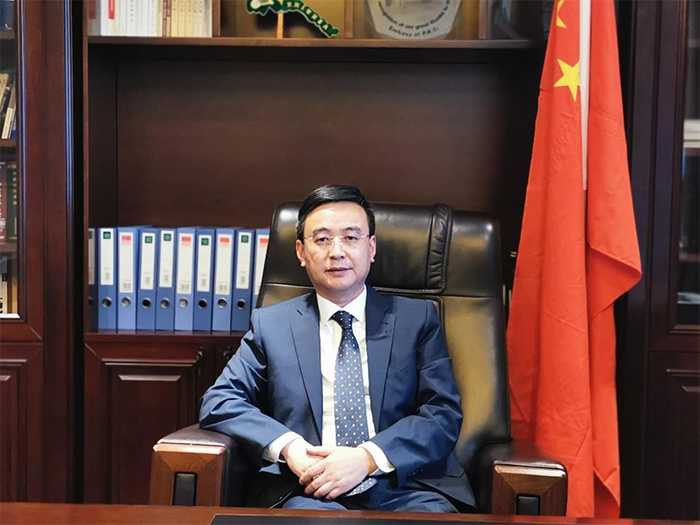 October 1, 2020, is the 71st anniversary of the founding of the People’s Republic of China, and 2020 is also an extraordinary year for China. . . . On the 73rd World Health Assembly held in May and the Extraordinary China-Africa Summit on Solidarity Against COVID-19 held in June, H.E. President Xi Jinping announced a series of international cooperation against COVID-19, including pledging that once the development and deployment of COVID-19 vaccine are completed in China, African countries will be among the first to benefit, which demonstrates China’s sincere desire to build a community with a shared future for mankind.

China will achieve the goal of building a moderately prosperous society in all respects; win the battle of poverty eradication in an all-round way, realizing the goal of lifting all the rural poor out of poverty under the current standards. As the country with the largest poverty reduction in the world, China has solved the problem of food and clothing for 1.4 billion people. It is also the first developing country to achieve the poverty reduction goal of the UNMDGs, contributing more than 70% to global poverty reduction. Winning the battle of poverty eradication is a solemn commitment made by the CPC to the Chinese people, and it is also a concentrated embodiment of the advantages of the leadership of the CPC and the socialist system with Chinese characteristics. It also contributes to Chinese wisdom and the Chinese approach to the cause of global poverty reduction.

From next year, China will implement the 14th five-year plan for national economic and social development and enter the first five years of a new journey to build a socialist modernized country in an all-round way. China will reach a new stage of development; promote the formation of a new development pattern with domestic circulation as the mainstay and domestic and international circulation reinforcing each other. China will generate new development momentum with scientific and technological innovation, stimulate new development vitality by deepening reform, foster new advantages of international cooperation and competition with high-level opening-up, build a new situation of social development through joint governance and sharing, and will pay more attention to safeguarding social justice and fairness, promote all-round human development and all-round social progress.

China will continue to be a builder of world peace, a contributor to global development, and a defender of international order. H.E. President Xi Jinping stressed China is the largest developing country in the world, taking the road of peaceful, open, cooperative, and common development. China will never seek hegemony, expansion, or seek a sphere of influence. It has no intention of fighting a hot or cold war against any country. It insists on bridging differences through dialogue and resolving disputes through negotiation. China will not seek vicious competition or engage in a zero-sum game or develop behind closed doors. It will gradually form a new development pattern with domestic circulation as the mainstay and domestic and international circulation reinforcing each other. This will create more space for China’s economic development and add impetus to the recovery and growth of the world economy. China will provide another 50 million US dollars to the UN COVID- 19 Global Humanitarian Response Plan. China will provide the third phase China-FAO Trust Fund for South-South cooperation for 50 million US dollars. The China-UN Peace and Development Fund will be prolonged for 5 years after it expires in 2025. China will set up UN Global Geographic Information and an Innovation Center and International Research Center of Big Data for Sustainable Development, to facilitate the implementation of the UN 2030 Agenda for Sustainable Development.

Enhancing solidarity and cooperation with African countries has always been the cornerstone of China’s independent foreign policy of peace, as well as China’s firm and longstanding strategic choice. Under the new circumstances, China will adhere to the principles of its African policy—sincerity, practical results, affinity, and good faith, uphold the values of friendship, justice and shared interests, and push for new leapfrog growth of its friendly and mutually beneficial cooperation with Africa. The core principle of upholding the values of friendship, justice, and shared interests is to connect assistance to developing countries, including those in Africa, for their self-sustainable development with China’s own development, achieve win-win cooperation and common development, and promote more balanced, inclusive and sustainable development of the world at large. China will never travel the beaten path of colonialism in its cooperation with Africa and never pursue development at the cost of Africa’s natural and ecological environment or long-term interests.

This year marks not only the 71st anniversary of the founding of the People’s Republic of China but also the 27th anniversary of the establishment of diplomatic relations between China and Eritrea; our two countries are forging ahead on their respective development paths. While the Socialism with Chinese characteristics has entered a new era, the Chinese Communists have been remaining true to their original aspiration and keeping their mission firmly in mind, which is seeking happiness for the Chinese people and rejuvenating the Chinese nation, and have led the Chinese people to forge ahead in realizing the “two centenary” goals and the Chinese Dream of the great rejuvenation of the Chinese nation. Under the leadership of H.E. President Isaias, the people of Eritrea have made great efforts in an independent way, and these efforts have led to remarkable progress in various areas and made important contributions to peace, stability, and development of the region.

China and Eritrea share similar experiences and profound traditional friendship. Over the past 27 years, our two countries have always respected each other, treated each other as equals, and supported each other on issues concerning our respective core interests and major concerns, cooperation has been fruitful in many areas. China is willing to work with Eritrea to deepen friendly and mutually beneficial cooperation by engaging in the Belt and Road cooperation and implementing the follow-up actions of the FOCAC Beijing Summit to the greater benefit of the two peoples.