Eritrea is winning the war against malaria 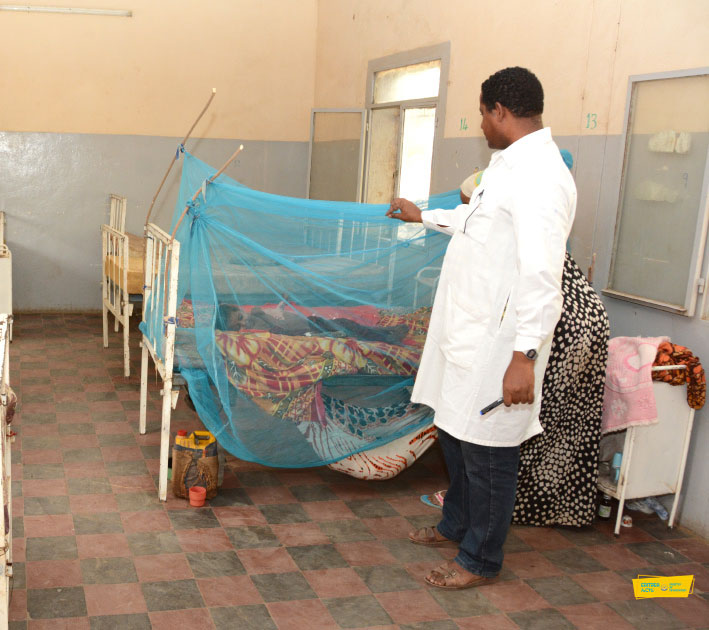 The Government of Eritrea launched the Primary Health Care Policy (PHCP) to minimize and eventually eliminate easily-controlled diseases that pose the most serious public health problems. Malaria, which affects millions in the developing world, is one of them. The common malaria parasite in Eritrea is Plasmodium falciparum, which accounts for more than 84% of all cases.

Eritrea achieved the Millennium Development Goals in the health sector because it was able to reduce its infant and child mortality, morbidity, mortality due to malaria, and the prevalence of communicable diseases as well as an increase in the penetration rate of immunization. The commitment of the government to providing sustainable and accessible health care has enabled Eritrea to be one of the countries expected to achieve the Sustainable Development Goals in the health sector.

The success achieved in health is attributed to strong political commitment and prioritization of health, innovative multi-sector approaches and administrative competency, and the ability of the government to motivate and mobilize the people. The main driver behind such a commitment is the government’s emphasis on human capital as a vital element of development. Historically, during the struggle for independence, the EPLF put great emphasis on education and health with particular emphasis on the rural population. The barefoot doctors made regular visits and conducted surveillance to protect the health of the people.

Since independence, Eritrea has been successful in controlling the spread of many communicable diseases, including malaria, mainly due to its strong commitment that puts health at the center of development. The government foresaw future needs and made long-term investments in health. The reduction of morbidity and mortality caused by malaria has been realized as a result of strategic interventions that included distribution of mosquito nets, early diagnosis, high level of community awareness, and access to health facilities throughout the country. As a result of the efforts made to build, expand and upgrade health facilities, access to health care is available for all within a five km radius. These developments and improvements in healthcare and other sectors over the last twenty-nine years has led to unprecedented reduction in malaria.

Although through systematic integrated surveillance and vector control mechanisms, the threat of malaria has been minimized greatly, the government will not be satisfied until malaria is totally wiped out of the nation. As the National Health Policy of Eritrea states “…comprehensive vector-borne disease including malaria control and prevention measures will be strengthened to ensure that malaria will no longer be a public health problem in the country” (2010:18). Eritrea’s progress in the provision of health care is also demonstrated in life expectancy, which has risen from 49 years in 1991 to over 64 years at present.

Despite the commendable achievements in the control and prevention of malaria, the threat of resurgence due to climatic changes is evident. Rainfall this season is forecasted to continue in the coming few months, and the period from September to December is considered ‘malaria season’ in Eritrea, especially in the Gash Barka and Southern regions, the two most susceptible malaria-risk regions in the country.

Malaria is both a cause and consequence of poverty. For this reason, the government of Eritrea sees malaria not only as a public health concern but also as a major challenge to development. Accordingly, the fight against malaria is considered a way to improve the health status of the population and reduce poverty. The general wellbeing of the people is determined by, among many factors, health. Poverty cannot be alleviated in an environment plagued by diseases.

The prevalence of malaria is associated with the impoverishment of households. Women’s empowerment, poverty eradication, and complete self-reliance are difficult to achieve without the elimination of malaria. The Eritrean society has benefitted greatly from the defeat of malaria. People today are far healthier than ever before. As early as 2013, Eritrea’s Malaria Program- Performance Review concluded that Eritrea was winning the war against malaria. For instance, malaria infection has been declining from 110 cases/1000 people in 1998 to 11.9 cases/1000 in 2012 and malaria-caused deaths have been declining from 0.198/1000 people in 1998 to 0.0076/1000 in 2012.

The goal of the malaria control program in Eritrea is to ensure that malaria will no longer be a public health problem. According to the Program Improvement Agenda, Eritrea has already launched pre-elimination programs (2014- 2018). Now, the journey to elimination and the establishment of a malaria-free future is on the way.

As we all know, the global health security is in danger due to the rapid spread of COVID-19. Human lives are disrupted and the national economy of every country is severely shattered by the virus. With the outbreak of the pandemic, UNICEF warned that the overlap of COVID-19 and malaria could have potentially highly lethal consequences for children under-five if governments failed to respond soon to ensure continuity of services. The organization reported that every two minutes, a child under the age of five dies from malaria. According to the 2019 World Malaria Report, children under five accounted for 67 percent of all malaria deaths worldwide in 2018. Most of the cases were in sub-Saharan Africa.

Although Eritrea is not free from the disruptions of COVID-19, it is one of the few countries that have no records of deaths caused by the virus. However, while it has been taking precautionary and necessary measures to limit the transmission of the virus, it has not ignored other killer diseases, such as malaria. Environmental management through community participation and outdoor and indoor spraying of insecticide for the prevention and control of malaria outbreaks continue to be practiced. Also, insecticide-treated mosquito nets are handed out to people who live in the malaria-prone regions and free ambulance services are given, particularly to women and children. Further, awareness-raising campaigns are conducted by the national media outlets to keep people vigilant.
It is common knowledge that sick people are too weak to work, and this causes them to suffer from poverty. Fortunately, the era of misery caused by malaria is going to end in Eritrea with the elimination of malaria. This means having healthy people who are productive and capable of eliminating poverty in Eritrea once and for all.

Statement by Ms. Tekea Tesfamichael at Twenty-Fifth Anniversary of the Fourth World Conference on Women