Most people in Eritrea live in rural areas and earn a living through traditional farming and animal breeding practices. They grow food almost entirely by depending on the seasonal rain, which is often scarce.

However, the Government of Eritrea has been working on reducing peoples’ dependence on subsistence farming by encouraging and assisting farmers to introduce small scale commercial farming practices. Of course, water is one of the most important resources needed to make this a reality, and the Logo Dam Developmental Pilot Project has been designed with this in mind. Water reservoirs were built and check dams were put in place with an extended work in soil and water conservation through a joint Government-People venture. The seven villages included in the project surrounding Logo Dam are Adi Zawl, Adi Kelkelti, Adi Halo, Adi Selait, Adi Tsenay, Adi Sherefeto and Adi Hayo, thereafter, started working on a new pattern towards social transformation.

Logo Dam was built not only to provide sustainable potable water but to allow rural farmers of the villages included in the package to expand their farms to small profit generating operations. While touring the seven villages, we saw many farmers who are growing a variety of fruits, vegetables and organic honey.

So what kind of investment resulted in such changes in less than four years? The main actors in the transition from subsistence farming to small scale commercial farming are the farmers themselves. This is an awesome achievement, but to make it even better the farmers’ investment should not be limited to the land but also to their own development.

To see the efforts being made to empower the farmers through training so that they could apply modern ways of farming on their fields, my colleagues and I went on a tour in the villages targeted by the project.

At 6:00 in the morning, Monday to Friday, land cruisers, carrying small groups of young professionals, leave the Plant Nursery Department, which has 24 agronomists, head to the designated villages.

By approximately 6:30, the teams reach their designated areas in the six villages. Farmers of Adi Halo come directly to the Plant Nursery station because it’s close to their village. There, the young professionals meet their main stockholders in the project, the farmers. Classes begin at 6:30. The young professionals — men and women — go there to teach.

On August 22nd, we stopped by the Plant Nursery Department so that our photographers could take some pictures in the nimble light of the morning sunshine. The rest of the team aimlessly toured the nursery until we were attracted by the voice of a young woman coming from the back. We followed the voice coming from a room filled with women covered with natsela (a traditional white shawl), young girls rushing to take notes, men and boys. They were all sitting in a semi-circle, attentively looking at a young woman standing in front of them with a book on her hand.

I wondered what they were doing gathered so early in the morning. And it was almost impossible to take a guess until I approached the group and heard what the lady standing was saying. She definitely looked different from the villagers. Her nails and hair were done beautifully. She is not a farmer; she is an agronomist. And she was there to share her knowledge with the farmers and villagers of Adi Halo. The session was animated by the participation of the villagers.

Life in the Eritrean rural areas starts at dawn. To avoid the scorching sun at mid-day, people normally start their days so early in the morning. Therefore, convincing farmers to attend classes instead of going to work on their farms was not easy. Therefore, to promote attendance in the classes farmers are given a monthly allowance of 500 Nakfa and 45 kilograms of grain.

The farmers are also taught public health and encouraged to refrain from harmful practices that can damage the environment. The farmers’ standards of living are gradually improving as we saw while on tour for ten days.

Young professionals like Miss. Ruta realize the impact of their awareness raising programs. She said that the effect of the training they gave the farmers is seen in the harvest over the last two years. She said she enjoys the classes because they are not ordinary classes but platforms for sharing ideas and experiences with the farmers, who come to class with a lot of information that helps the research center at the Plant Nursery Department. Miss Ruta Mekonen, a graduate of Hamelmalo College of Agriculture, said there is no better way of giving back to her community. 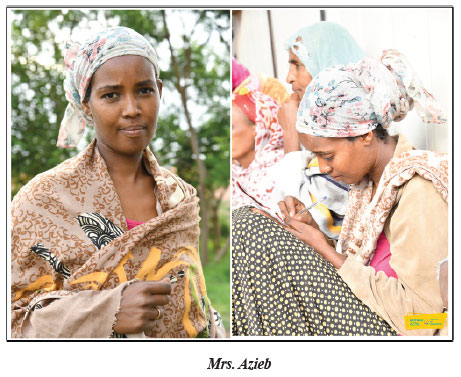 Mrs. Azieb, a 28-year-old who left school in 9th grade to get married, said she is happy to be back in class. She and her husband now raise their family and work on their farm together. They also take turns to look after their kids in order to attend classes. Mrs. Azieb told me she hates missing classes because she saw her life changing gradually as she continued to rely more and more on her small scale commercial farm. Traditionally, Eritrean men do not look after their kids as it is considered to be a “woman’s job.” So, I was surprised to see Azieb’s husband have no problems looking after his children when she goes to attend her classes. But Azieb said that the only way they could sustain their family is by both working and added that the general convention about gender roles is slowly but surely evolving in Eritrea.

Eritrea is winning the war against malaria