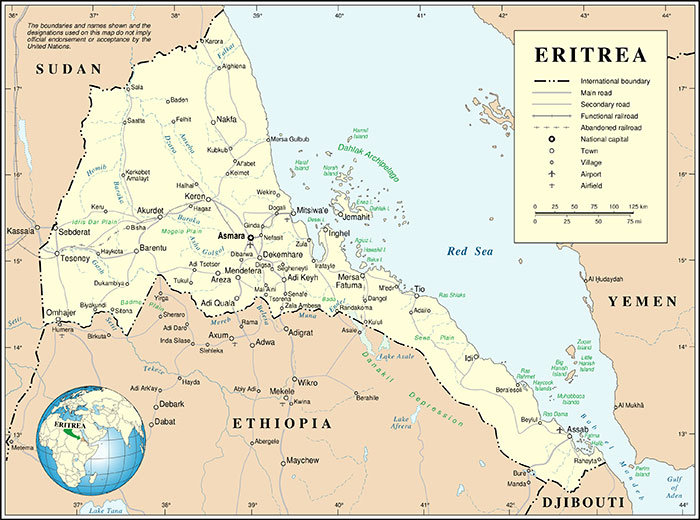 Several weeks ago, the United Nations (UN) gathered for its annual general assembly meeting– virtually. Due to the COVID-19 global pandemic, national leaders did not travel to the UN, located in New York, to deliver their addresses, instead doing so via prerecorded video messages. As well, most of the usual events and proceedings related to the annual gathering were held virtually. In addition to the challenges posed by the COVID-19 pandemic and widespread economic disruption, this is a unique year for the global organization: 2020 marks 75 years since it was formed. This important occasion is an ideal time and useful opportunity to take a closer look at the UN. In the last edition of Eritrea Profile (published Wednesday 07 October), I reviewed the UN’s general history, briefly noting some of its key achievements and challenges. Here, I turn to focus on the UN’s historic relations with Eritrea. Even though Eritrea is a young state – one of the youngest in the world – its history with the UN is actually quite long. And while the UN espouses many noble values, ideals, and principles, its historic relationship with and treatment of Eritrea have been problematic and fraught with injustice.

In the immediate post-WW2 period, the UN overlooked Eritreans’ calls for independence. Contrary to principles recognized by the UN, and unlike the other Italian colonies that received independence at the end of World War II (i.e., Libya and Somalia [Italian Somaliland]), Eritreans’ inviolable and inalienable right to self-determination was denied. After a lengthy international process seeking to develop an “appropriate” solution to the Eritrea question, on 2 December 1950, United Nations Resolution 390 (V), was passed by the UN General Assembly. Resolution 390(V), which was backed and sponsored by the US, extinguished Eritreans’ hopes and aspirations for independence, federating Eritrea with Ethiopia as “an autonomous unit…under the sovereignty of the Ethiopian Crown.”

However, Ethiopia, an absolute monarchy ruled by Emperor Haile Selassie, viewed the federal structure with disdain and contempt. In November 1962, after years of steadily erasing the federation and subjecting Eritreans to repression, violence, and persecution, the imperial regime dissolved the Eritrean parliament under force of arms and annexed Eritrea, proclaiming it as the empire’s fourteenth province. Throughout this period, the UN and the international community remained silent and failed to muster a response. This was despite the fact that Eritrea had been guaranteed a review of its case by the UN if Ethiopia violated the international resolution. The UN also could not claim ignorance since many Eritrean political leaders and activists, on numerous occasions, appealed and petitioned to the organization in protest of Ethiopia’s actions.

Subsequently, over a period of several decades, the UN continuously refused to hear Eritreans’ calls for self-determination and protection. In fact, not once throughout the long period – from 1950 to 1991 – did Eritrea, the scene of Africa’s longest war, and victim of some of the grossest violations of human rights, figure on the agenda of the UN. In 1981, ten years before Eritrea would eventually gain independence, the International Commission of Jurists stated that:

“Of all the people who, since the Second World War, have been the victims of Great Power rivalries and ambitions, perhaps the one with the greatest claim for consideration is the people of Eritrea. Nevertheless, no nation has yet been willing to raise the issue of the rights of this people in the United Nations. The truth is that the ‘Eritrean question’ is a source of embarrassment both to the UN itself and to almost all ‘interested parties’”.

Nonetheless, in 1991, Eritrea was able to bring about what to many for so long seemed highly unlikely, if not essentially impossible: the defeat of Africa’s largest, best-equipped army and the achievement of independence. After holding an internationally-monitored referendum two years later – with 99.81percent of Eritreans voting for independence from Ethiopia – the country formally announced its independence. Eritrea was finally admitted to the UN as its 182nd member by General Assembly Resolution 47/230 of 28 May1993. Several months later, on 30 September, Eritrean President Isaias Afwerki addressed the 48th Session of the General Assembly. In a memorable speech, he proudly shared how the Eritrean people remained strong despite their struggle being ignored: 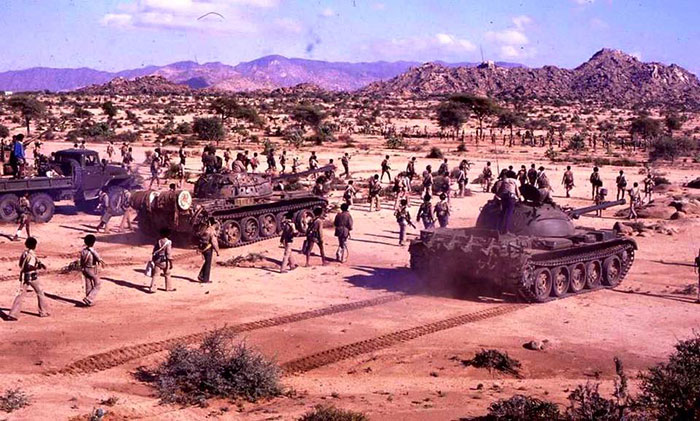 “[The years of] deafening silence pained our people. It also gave a free hand to the aggressors, thereby prolonging our suffering and increasing the sacrifices we had to make. But it neither shook our resolve nor undermined our belief in the justness of our cause and the inevitability of our victory. As an Eritrean proverb says: ‘The rod of truth may become thinner but it cannot be broken.’ Indeed, justice has finally prevailed. This is a source of hope and happiness not only for the Eritrean people, but for all those who cherish justice and peace.”

However, it was not long before the UN seemed to return to old form. Although Eritrea and Ethiopia had maintained generally strong and cordial relations after Eritrea’s independence, things would soon considerably deteriorate, and between May 1998 and June 2000 the two fought the largest and deadliest conventional war in contemporary African history. After the failure of several efforts by the international community to mediate an end to the conflict, the two countries signed the Agreement on Cessation of Hostilities in Algiers in June 2000. Months later, in December 2000, Eritrean President Isaias Afwerki and PM Meles Zenawi of Ethiopia signed the Algiers Peace Agreement. Inter-alia, the agreements established an independent and impartial Boundary Commission to delimit and demarcate the border based on pertinent colonial treaties (from the years 1900, 1902, and 1908) and applicable international law. 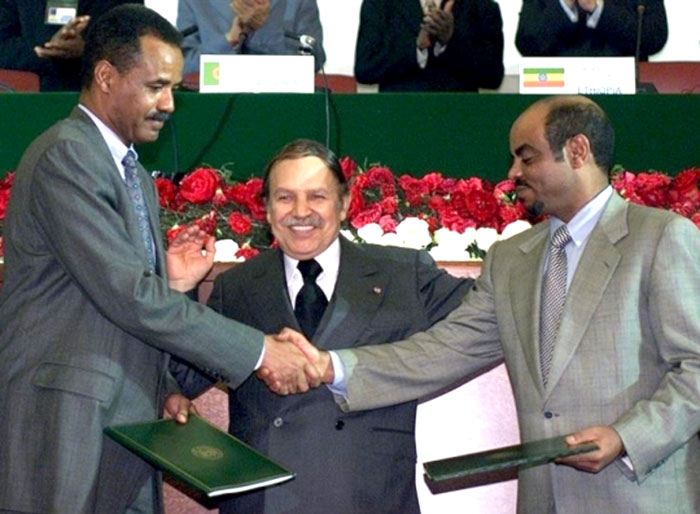 After a lengthy litigation process lasting 14 months, the Eritrea Ethiopia Boundary Commission rendered its “final and binding” delimitation decision on 13 April 2002 at the Permanent Court of Arbitration in The Hague. While Eritrea accepted the decision hoping that the final determination of the border would open doors for lasting peace and development between the two countries and the region as a whole, Ethiopia essentially rejected it and sought an alternative mechanism to reopen the process. The UN, as one of the witnesses and guarantors of the agreement, completely failed to shoulder its legal and moral responsibility to ensure that Ethiopia comply with the decision. For years, it stood idly by as sovereign Eritrean territories remained under an illegal military occupation.

Finally, of course, in December 2009 and December 2011, the UN Security Council adopted resolutions imposing a series of punishing sanctions on Eritrea, despite the lack of any solid evidence for the claims and allegations raised. The measures were biased, unjustified, and not rooted in a genuine concern for international peace and security. Instead, they were engineered by previous US Administrations in order to punish Eritrea for: a) refusing to yield its position and the legal course on the EEBC ruling, thus thwarting a key imperative for the former US administration’s “regional enforcer” and proxy, Ethiopia, and b) for Eritrea’s open and candid criticisms of flawed US policies in the Horn of Africa. For nearly a decade, far long after the alleged pretexts for their original imposition were clearly shown to be nonexistent, the unjust sanctions were maintained. Throughout, they were a great impediment to Eritrea’s nation-building and development efforts and also had a negative impact on peace and cooperation in the region.

Biodiversity: A Barricade from Novel Diseases