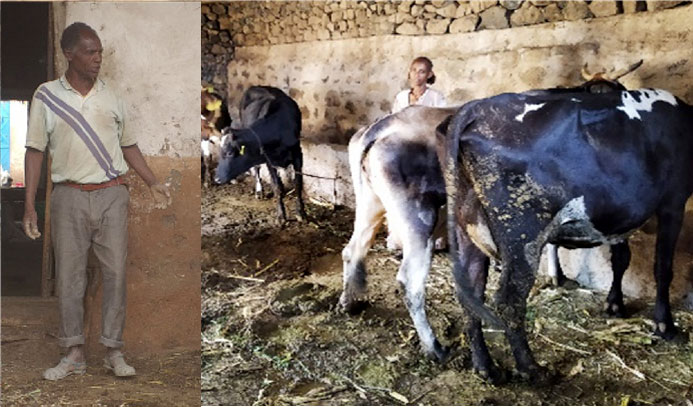 A forage based dairy project which is being piloted in Dubarwa Sub zone of the Southern Region has brought satisfactory outcomes to beneficiary farmers.

According to Mr. Ermias Kflay, Coordinator of the community based dairy project and Animal Production Researcher in the National Agricultural Research Institute (NARI), the pilot project commenced in 2014 with 20 beneficiaries in 7 villages of Debarwa Sub-zone. The number has, currently, increased to 47 beneficiaries from 16 villages, who have fully adopted the forage-based production system and are registering commendable progress from time to time.

This newsletter presents success story of a beneficiary from the project.

“If there is a small scale dairy farmer to be looked up to as a pacesetter, it is Mr. Abraham Tesfatsion. He is a living proof that proper utilization of forages leads to the desired performance of the dairy farm”, Mr. Ermias stated.

Mr. Abraham’s achievements are seen as benchmarks and aspirations to be looked up to by other beneficiaries. The farmer has registered extra-ordinary scores in all the achievement indicators like milk yield, milking days, age at first calving, calving frequency, conception rate of the cows, percentage of milk sold, percentage of lactating cows and etc.

Milk yield amounting on average to 10 liters per cow per day has been consistent in his farm, which has sustained supply to his calves and his entire household. Despite the long distance, the milk is also merchandized to the neighborhoods and to the milk collection center in Dubarwa town.

During the onset of the project in 2014, Mr. Abraham was presented with an in-calf heifer which calved soon after. Pertaining to the contract of the project, the good quality heifer was passed on to another beneficiary. The heifer gave birth to a female calf which in turn grew to the point of being transferred as a mature heifer to another new beneficiary in another village.

Thanks to the project, Mr. Abraham bought a motor-pump at 45,000 Nakfa to diversify his activity in to horticultural products and has improved his livelihood. Mr. Abraham’s herd size has increased from one in-calf heifer in 2014 to six heads in 2020 without counting the passed-on heifer and the bull sold.

There are a majority of females in his farm in which two are lactating pregnant cows, two are growing heifers awaiting service, one female calf and one mature bull. This farmer has now turned his dairy farm into a self-contained unit as he is using his own bull to serve his cows. The bull also serves the cows in the village free of charge.