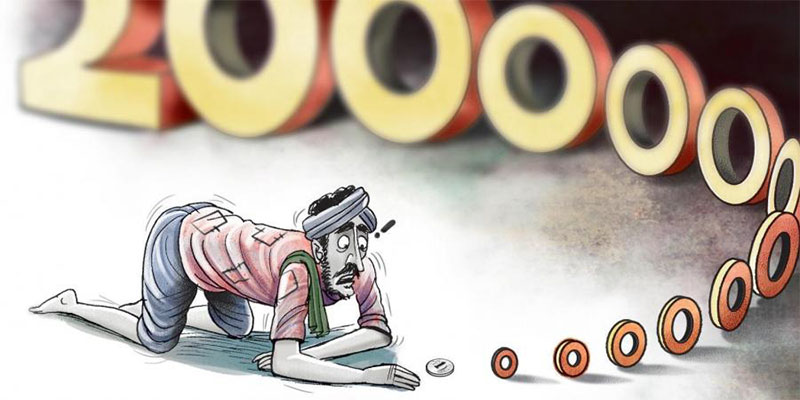 Are the poor destined to remain destitute forever? Absolutely not!

“How do you feel living in a dilapidated hut and right across the street your neighbor lives in a spacious villa and enjoys his Jacuzzi?” you ask a poor man.

“Never mind,” replies the poor and the destitute, “I am destined to remain poor while my neighbor is pre-ordained to remain reach.”

The other day I read in a magazine a comical conversation between two people:

“I am more intelligent than you are.”

“What proof do you have?”

“Because I am richer than you are!”

May be there is some logic in the reply, but such an assertion doesn’t always hold true. Take, for example, Mozart, Beethoven, Gandhi or Isaac Newton. These people were anything but rich, and some of them couldn’t even get a decent burial when they died.

Some of the reasons often given for poverty are: no culture of saving, living only for the day, wanting to have la dolce vita without working.

In any case the gap between the poor and the rich has to somehow narrow down. At least the poor have to lead a decent life. This is where the government has to intervene by encouraging the poor to pull themselves up by their own bootstraps.

The best place to start is the infrastructure. The efforts made by the government of Eritrea to ensure a fair distribution of wealth is demonstrated in its focus on building roads, schools and clinics in every nook and cranny of the country until the poor have no excuse to remain poor.

Once, a certain journalist went to the semi-slum quarter in Monrovia, Liberia, invited by a little girl (Street Vendor) to visit her poor mother. What he saw there is beyond description. It wasn’t into a room that the little girl led him but into a dark hole with a tin roof that looked like a strainer.

“What do you do when it rains?” he asked the mother.

She showed him a waterlogged mattress drying in the sun outside. The little girl blushed. Her little brother giggled.

The journalist was later told by the little girl that her mother sells vegetables in the street and that her sister is a prostitute and her older brother in prison.

“It was my mother who wanted him to stay there for something he did to her?” she replied.

Some mother! But she could have joined forces with him to repair the roof instead. When poverty dwells in the mind, it is impossible to work and get rich. They say that if you went into a town with 30% rich and 70% poor people, and you gave 1,000 dollars each to every citizen and asked them to use it to improve their economic condition and come back a year after, you would probably see no change among the poor, while the rich would have gotten richer. Poverty can sometimes become a culture.

Man is a mysterious creature. Do you know that some people enjoy remaining poor probably for some sort of weird revenge? They want to say to their Creator: “Okay, you closed all opportunity to us, we who have worshipped you all our lives; well from now on you will see us begging and people will say, ‘Hey, look what happened to those guys who have put all their trust in their Creator!”

Once there was a man who got married and lived happily with his wife until his mother arrived in her capacity as mother-in-law. Of course, she fought with the bride. Well, inevitably the husband had to choose: either his mother or his bride. So, finally, the mother had to leave. Goodbye mamma. But the newly evicted mother thought about how to humiliate her son in public. You can guess what she did in the end. Her son tried all he could to bring her back to her sense, in vain.

I don’t know where she is at present. She must have been begging, though, when she died. And there are people who become rich in spite of themselves. They inherit a fortune and couldn’t believe it themselves. How do you prove to yourself that the money you have in your hand is for real? Very simple. You start spending it. So, most of these born winners act, as the Tigrinya expression has it, like a dog which is unleashed by his master for break. And, of course, they act like one.

Then there is the Diaspora effect. It goes like this: there is a good-for-nothing guy here in Asmara who hangs around bars and cafes, leering at busty chicks and drooling at mini-skirted lasses. Fortunately, he has a sister or a brother who lives abroad. Dear brother sends a dollar as soon as possible, and the money simply flows in. Result: you have a rich poor young man with more money to drink and dance the night away and with no money in the morning for breakfast.

It is said that the Eritrean nouveaux riches appeared in Asmara during the Derg era. Where else do you expect them to appear? There is a proverb in Tigrinya which goes: when there is a fight at the market place, it is the thief that profits the most. And fighting, there was more than enough, both in high places and the battle ground.

With their newly acquired wealth, the nouveaux riches did everything they perceived in their wildest dreams, with the exception that they never thought of learning something about modern business. They were as certain to get richer by chance or lose everything they had overnight. That’s how many of them perished, leaving traces of villas and concubines behind.

But there were also some do-gooders. In our culture, the good rich man builds churches or mosques or schools at his home village, helps his relatives to get good education, get married and prosper.