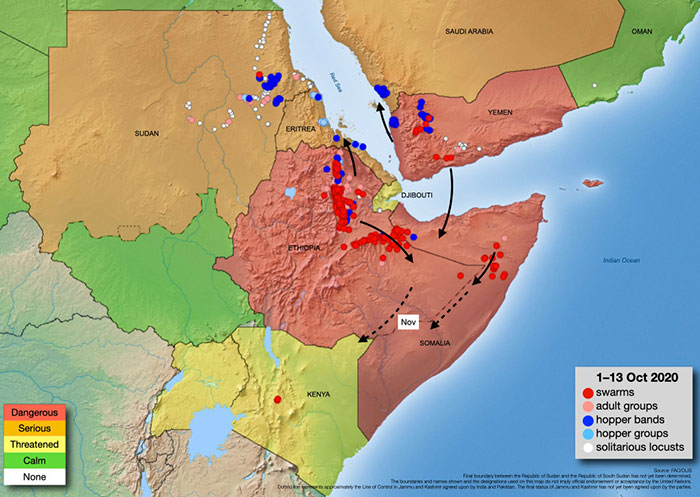 Asmara, 24 October 2020 – Effective and concerted desert locust invasion control measures are being undertaken in several regions of the country, the Ministry of Agriculture reported.

According to the Ministry, concerted measures are being taken to put under control the desert locust swarm infestation in almost all sub-zones of the Southern Region starting from 16 October. The desert locust swarm came across the border from Ethiopia and has inflicted no significant damage on crops and vegetation so far.

Likewise, desert locust swarm invasion that stretched in over 100 hectares of land in the surroundings of Himbrti, Gala Nefhi sub-zone, the Central Region have been put under control, thanks to the concerted measures by the public, EDF units, and agriculture experts.

Speaking to Erina, Mr. Habtemariam Amenay, head of agriculture in Gala Nefhi sub-zone, Ms. Luwam Kibrom, plant protection expert, as well as Col. Tekle Weldegergis from EDF units in the locality stated that early preparation, timely and integrated response has significantly contributed in the success of the effort.

In related news, a successful drug spraying effort is underway to put under control locusts that are hatching in the Northern Red Sea Region, the report added.

As the upsurge of desert locust infestation from neighboring countries remains critical, the Ministry of Agriculture called for urgent and expedited crop harvest and stakeholders to report instances of locust swarms.