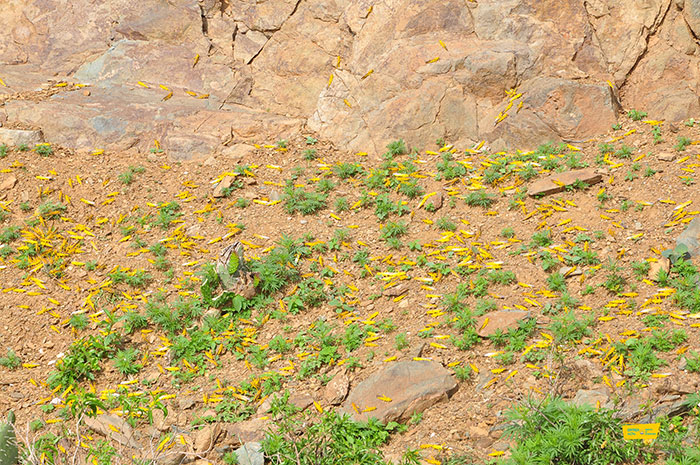 Asmara, 27 October 2020 – Concerted control measures are underway in various Regions of the country to combat desert locust swarm invasions from Ethiopia, the Ministry of Agriculture reported.
According to the Ministry of Agriculture, in the Southern Region, effective desert locust infestation control measures are underway in Adi-Keih, Emni-Haili, Tserona, Adi-Kuala, Mendefera and other sub-zones by EDF units, the public, and agriculture experts.

The Ministry also stated that locust infestation that was stretched over 800 hectares of land in the Southern region has been put under control and ongoing effort is underway to combat continued invasions from Ethiopia in the last three days.

Likewise, in the Central Region, locust swarm that was stretched over 200 hectares of land in Selae Daero administrative area, Gala Nefhi sub-zone, has been put under control.

Similarly, hoppers that were hatched in about 1,400 hectares of land in the Northern Red Sea Region have been put under control through concerted measures under taken from 23-25 October in Qrora, Afabet and Shieb sub-zones.

More concerted measures are also underway to put under control locust infestation that appeared in the environs of Asmat, Anseba Region and in parts of Kerkebet and Selia sub-zones, Gash Barka Region.
As the upsurge of desert locust infestation from neighboring countries remains critical, the Ministry of Agriculture called for urgent and expedited crop harvest and stakeholders to report instances of locust swarms.