Embassy of the State of Eritrea United Kingdom 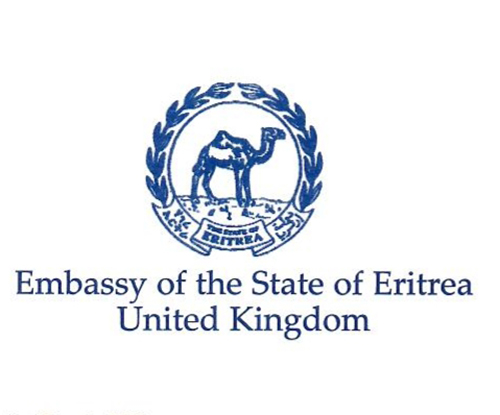 The Embassy of the State of Eritrea to the Court of St. James’s presents its compliments to the Foreign, Commonwealth and Development Office and wishes to draw your attention to the letter dated 4 November 2020 from Kate Osamor MP, on behalf of the APPG on Eritrea.

The Embassy of the State of Eritrea unequivocally and categorically rejects the APPG on Eritrea’s claims that Tigray, a region in Ethiopia, is facing threats from the Government of Eritrea.

The historic Peace Agreement signed between Eritrea and Ethiopia in 2018 ended the twenty-year war and ensuing no-war no-peace footing between the two nations, pursued by the previous Ethiopian regime under TPLF. Two years on, the peoples of Eritrea and Ethiopia are yet to fully enjoy the dividends of this peace agreement due to sovereign Eritrean territories remaining illegally occupied, and the peace process held hostage by the TPLF regime in Tigray.

Eritrea prides itself on being an independent nation striving for its right to live in peace and without threats to its sovereignty and territorial integrity. Yet, during the last two decades of the no-war no-peace period, the Government of Eritrea did not opt for warfare but instead continued its appeal to the international community for the respect and fulfillment of the Eritrea-Ethiopia Border Commission’s final and binding decision.

As a nation borne out of a struggle for human rights in a volatile region, Eritrea has made significant strides, which cost it dearly, in the promotion of peace and stability in the Horn of Africa.

The long track record of the APPG on Eritrea’s antagonistic and malevolent attitude towards the Government and People of Eritrea cannot be overlooked. The Group’s unfounded claims of threats and hostility by the Government of Eritrea to the Tigray region of  Ethiopia is ignorant at its best and malicious at its worst.  Rarely seeking objective and reliable information,    almost exclusively relying on  “reports”   and/or innuendos churned out by the narrow network of  Eritrea’s arch-enemies,   actively working towards regime change in Eritrea,  the APPG  on Eritrea has in effect become a “mouthpiece”  of regime change activists and complicit in this scheme.

Eritrea values the importance of mutual cooperation and is pursuing the advancement of regional and international relations; and appreciates that bilateral partnership can only fester in good faith.

The  Embassy of the  State of Eritrea avails itself of this opportunity to renew to the Foreign,   Commonwealth    &  Development    Office the assurances of its highest consideration.

Estifanos Habtemariam,
Ambassador of the State of Eritrea to the United Kingdom of Great Britain and the Republic of Ireland

Statement by H.E. Tesfai Ghebreselassie Minister of Land, Water and Environment, Eritrea at the Sanitation and Water for All