Fauna and Flora Data base under development 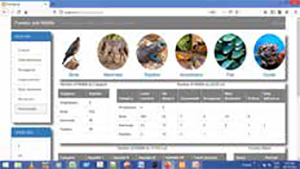 The Ministry of Agriculture in collaboration with the Ministry of Marine Resources; Ministry of Land, Water and Environment; Forestry and Wildlife Authority; and the Eritrean Institute of Technology (EIT) has launched a national database on fauna and flora, including domesticated livestock and cultivated crops species.

For this purpose, a start-up meeting was organized on October 9, 2020, in Asmara which was well attended by senior experts from the institutions mentioned above. The main objectives of the meeting were to assess the existing data and information on fauna and flora and to agree on a suitable national database to document these resources.

Mr. Tekleab Mesghena, Director General of the Regulatory Services Department (RSD) in the Ministry, in his opening remarks, highlighted the importance of fauna and flora resources and stated that if properly studied and documented it could be one of the most priceless resources of the country. He informed the participants that in the past and particularly in connection with international treaties, such as the Convention on International Trade in Endangered Species of Wild Fauna and Flora (CITES) and the Convention on Migratory Species (CMS), of which Eritrea is a member, challenges have been faced in the identification of plant or animal species (including fish) that are threatened or at risk of extinction or that are migratory in nature, which may require conservation actions. 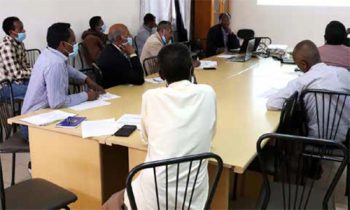 He outlined that it is these challenges that triggered the organization of this workshop and created an opportunity to broaden the scope of identification and documentation processes to go beyond CITES and CMS listing.

Finally, he stressed the need for national coordinated efforts to identify and document such valuable resources.

Mr. Yacob Yohannes, Director of the Natural Resources Regulatory Division in RSD and the national coordinator of the project presented information on some documented fauna species. He informed participants that Eritrea is endowed with 126 mammalian species out of which at least 11 species are known to have been extinct and another 30 species are considered to be at risk of extinction. Moreover, he indicated that around 577 bird species exist in Eritrea.

During the meeting, discussion groups were formed and examined the existing data and information of fauna and flora documented by the institutions represented; with the objectives of identifying gaps and the need to address them; and also to map out strategies and approaches to meet challenges of data collection. Towards the end of the meeting, the participants underscored that policy issues related to the use and management of the national database should be addressed and the representation of other stakeholders like Hamelmalo Agricultural College should be secured.