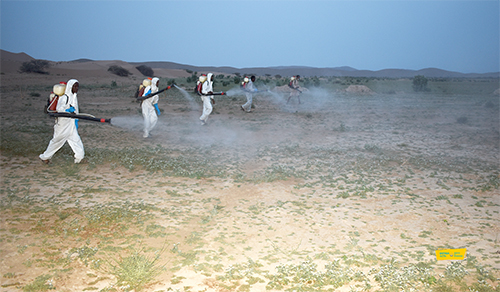 In a couple of articles that were featured in Eritrea Profile last week, I provided a broad overview of some of Eritrea’s general successes and challenges during the coronavirus disease (COVID-19) global pandemic. In the second part of the series (published 4 November), where I outlined some of the challenges arising during the national fight to contain COVID-19, I briefly touched upon the problem of desert locusts. Here, I will delve a little further into this topic which has become an increasingly serious problem in the Horn of Africa over the past several months. In fact, just weeks ago the Food and Agriculture Organization (FAO), an agency of the United Nations, reported that “the situation remains very critical as more swarms form and a new generation of breeding has now started in Ethiopia and Somalia.”

The desert locust is a type of grasshopper. However, it is far more destructive than the common garden variety, often being described as “the world’s most devastating pest”. Desert locusts have the ability to form swarms, which can be very dense and highly mobile. With favorable winds, they can fly as much as 150km a day. (This mobility helps them to avoid most natural enemies and predators. It also helps explain their movement across the Red Sea.) According to experts, an adult desert locust can consume its own weight in fresh food per day (that is, approximately several grams), while just one small swarm (approximately 1 km2) has the potential to eat the same amount of crops in one day as about 35000 people. During quiet periods, which are known as “recessions”, desert locusts are generally restricted to semi-arid and arid deserts. This includes parts of about 30 countries within Africa, the Near East, and southwest Asia. However, during upsurges, or what are known as plagues, desert locusts may spread over an enormous area and can reach as many as 60 countries (representing more than 20% of the total land surface of the world).

Locust swarms can vary in size: from less than 1km2 to over 1000km2. In each square kilometer of a swarm, there can be between 40 million and sometimes as many as 80 million locust adults. With each individual locust capable of eating its own weight in crops and vegetation each day, it becomes relatively easy to see how a desert locust invasion can lead to a considerable drop in agricultural and food production, severely damage livelihoods, deplete food stocks, and create significant risks for a population’s food security.

While locusts have been a regional challenge for centuries, the latest locust invasions in the Greater Horn of Africa can be traced back towards the end of 2019, when a major upsurge of swarms was seen in parts of Ethiopia, Eritrea, Djibouti, Somalia, Kenya, Uganda, South Sudan, and Tanzania. Earlier, in 2018, regional weather patterns, including cyclones, and particular environmental conditions provided favorable conditions for locusts to thrive and proliferate. As I noted last week, the latest locust invasion in the region is being regarded by many experts as the worst in the region for several decades (and in some countries, such as Kenya, the locust outbreak is the worst seen for 70 years).
In Eritrea, desert locusts have been seen in all regions of the country. The swarms have originated from neighboring countries, many of which have been confronted by an array of crises that has made combatting locusts even more challenging. To date, Eritrea has been taking different measures to combat the desert locust invasion in order to minimize their negative impact on local communities, farms, livelihoods, and food security in the country.

For instance, intensive surveillance, regular monitoring, and early warning systems have been established. This includes the FAO-supported eLocust3 system, which gathers and transmits data on locust breeding and movement from “out in the field” directly to the Ministry of Agriculture’s Desert Locust Unit in Asmara. Through these various systems, the Ministry of Agriculture, local administrations, and the Eritrean Defense Forces (EDF) are able to find and treat locust breeding areas and infestations early. Early and decisive action helps ensure that young locusts (referred to as juvenile locusts or “hoppers”) cannot gather to take flight and prevents the growth and spread of large, uncontrollable swarms.

Notably, while Eritrea enforced a month-long nationwide lockdown due to COVID- 19, efforts to combat locusts continued unabated. Across the country, members of the EDF, alongside those from the Ministry of Agriculture, have been regularly deployed with chemicals and pesticides sprayed from hand-held tanks. Importantly, all those involved receive extensive training at in-depth workshops and are provided with appropriate equipment (such as protective masks, goggles, gloves, boots, and coveralls), ultimately ensuring safety and effectiveness.

In all areas of the country, local communities have also been mobilized in locust control campaigns. It is not uncommon to see entire communities – men, women, and youth of all ages and backgrounds – enthusiastically participating in these campaigns. As well as receiving information, regular updates, early warnings, and general training, community members, with the support of the EDF and local administrations, organize themselves into groups and conduct early morning campaigns to apply pesticides. Furthermore, members of farming communities have been working together to bring in their harvests ahead of time, thus keeping them away from hungry locusts and minimizing losses. In addition, the government has been extending various forms of support (such as food, cash handouts, basic items, etc.) to vulnerable and affected households.

As with Eritrea’s successful COVID-19 campaign, high levels of social cohesion, solidarity, and trust are being illustrated in the national fight against desert locusts. In particular, Eritreans residing overseas have recently established a voluntary national support fund to raise money and resources to help the country combat locusts. It is well worth noting that many of these overseas communities have already donated millions of dollars to support their homeland during the COVID-19 pandemic.

Recent reports from the Ministry of Agriculture suggest that the damage caused by locusts – to valuable crops, livelihoods, and national food security – has been relatively minimal. This is very encouraging and it is largely a testament to the tremendous work, deep commitment, and high-levels of coordination demonstrated by local government administrations, the Ministry of Agriculture, and the EDF. Eritrea’s relative success against desert locusts also reflects the great efforts, strength, and resolve of the country’s citizens and communities. However, as with Eritrea’s fight against COVID-19, it is important to recognize that there is no room for complacency. The considerable threats posed by desert locusts are constant. Thus, Eritrea’s vigilance must remain high and collective efforts need to continue in order to defend the country from “the world’s most destructive pest”.

The Passion of Spreading Social Services