Deki Erey: the vast opportunity of today and tomorrow 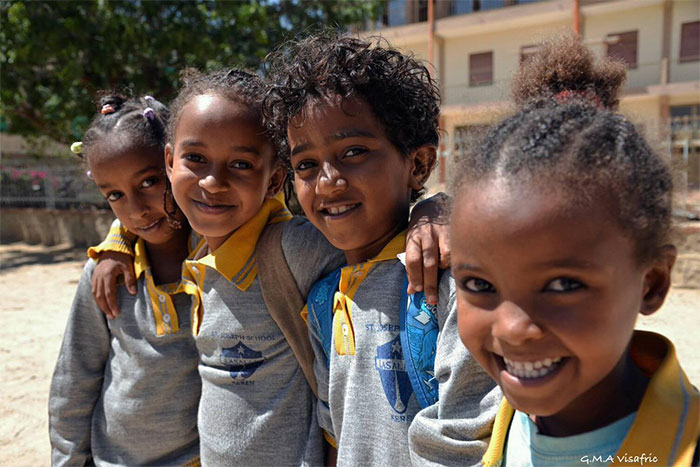 According to the United Nations (UN), “International days are occasions to educate the public on issues of concern, to mobilize political will and resources to address global problems, and to celebrate and reinforce achievements of humanity.” In the last issue of Eritrea Profile (18 November), I discussed World Diabetes Day, providing a general overview of diabetes and reviewing the situation in Eritrea.

Today, I shift to discuss another important international occasion, World Children’s Day (WCD), providing general background about the day and reviewing some of Eritrea’s important commitments to children.

Children are the most important and dynamic segments of society, representing the vast opportunity of today and tomorrow. Since the onset of independence nearly three decades ago, supporting and promoting the health, development, protection, well-being, and rights of all children, regardless of gender, background, religion, or other distinction, has been a foremost priority in Eritrea. One clear reflection of the priority that the country accords to the welfare and rights of its youngest citizens is that the first international convention ratified by the Government of the State of Eritrea was the UN Convention on the Rights of the Child (CRC). As explained by the World Health Organization (WHO), the CRC is “the primary instrument for the promotion and protection of children’s health, well-being and optimal development.”
Eritrea has also taken significant and tangible steps to put this commitment into action. In particular, it has put considerable investments into its children, seeking to ensure that all have a basic quality of life and are empowered to achieve their full potential. Two of the leading areas of commitment to and investment in children in the country are education and health.

In terms of education, recall that not only is it a fundamental component of human rights, supporting the realization of many other human rights, it is also a powerful tool for individual empowerment and a critical driver of economic growth and sustainable development. A large body of work has demonstrated that higher levels of education and literacy enable greater participation in the labor market; improve child and family health and nutrition; can help to reduce poverty; increase participation in communities and the political process; and greatly expand life opportunities. A glance at global income figures illustrates the existence of a strong correlation between national average incomes and literacy, with higher literacy rates being associated with higher national average incomes.

Since independence, Eritrea has built hundreds of schools and learning centers, in both rural and urban areas. Basic education is also compulsory for both girls and boys, and it is offered in the various languages spoken across the country, thus helping to ensure equitable access to all ethno-linguistic groups. Furthermore, the country has adopted a policy of universal free education from pre-primary to higher education, ensuring that every child, irrespective of background, distinction, or status, has the opportunity to enroll in education, become literate, and maximize their potential. Countless roads have also been established, alongside substantial expansions in public transport services, thus improving  ease of travel and accessibility to education for all children.

The result of these investments and commitments is readily apparent. Eritrea’s primary enrolment rates are now approximately 90%, while total student enrolments have grown tremendously. For example, in 1961 there were 50,286 total students enrolled in Eritrea, a figure that would grow to 247,567 by 1992/3. Over the past several years, around 700-800,000 students have been enrolled annually. Also, literacy rates for youth in Eritrea, averaging a remarkably high 92%, are not only the highest throughout the region, they are also higher than the continental or global average. In fact, according to UNESCO, Eritrea has had one of the largest increases in youth literacy anywhere in the world over the past 50 years. Also worth noting is that Eritrea’s literacy rate is higher than that of many other African countries, despite the fact that all the African countries (bar one) became independent decades before Eritrea.

Alongside education, the health of children has also been a national priority. Again, note that health is not only a fundamental human right, promotion and protection of child health is also an investment for tomorrow, since the healthy development of children is crucial to the future growth and well-being of any society.

Beyond the considerable improvements in child mortality, there are other reflections of Eritrea’s commitment to and prioritization of children’s well-being and health. For instance, there have been numerous other national health interventions, including free immunization campaigns, antenatal and postnatal care, supplementary feeding, and the prevention of mother-to-child transmission of HIV/AIDS, while the country has sought to address poverty, malnutrition, gender and structural inequality, harmful traditional practices (such as FGM/C and child marriage), violence, stigma and discrimination, and lack of access to safe drinking water and sanitation. Initiatives have also been undertaken to support families and communities learn how best to bring up their children healthily and deal with children’s illnesses when they occur. Additionally, Eritrea’s significant investments in developing and renovating roads and health facilities have greatly helped improve access to health services for children. In 2015, about 60% of Eritrea’s population had access to health care within 5km, while 40% had access to a health facility within a 10km radius. Of note, these figures have been further improved since then due to  the continuing development of roads and health facilities across the country.

In Eritrea, children are our greatest and most precious resource. Commitments and actions to ensure their survival, development, education, health, and well-being are not only matters of basic dignity and fundamental human rights, they are also important investments for a bright, prosperous future.

Interview: “Ethiopia Is Undergoing Through a Transition“