Cartooning in Eritrea – A Jealous Wife 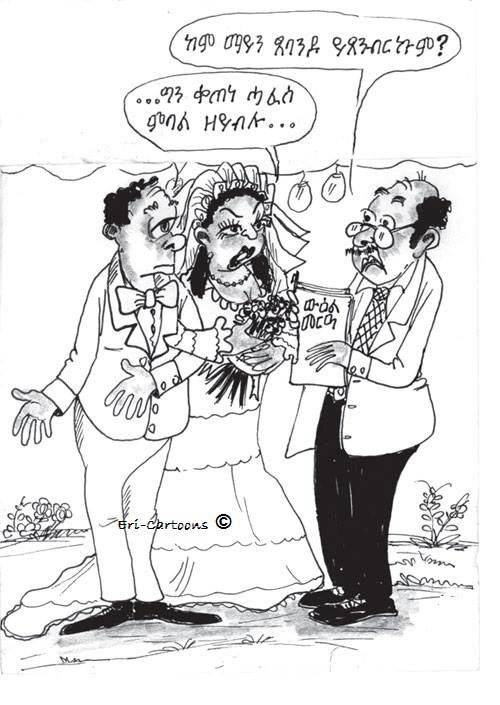 Some years ago, the annual Eritrea Festival, which presented drama, music shows, dancing, and other art-related activities, added cartooning to its repertoire. Just a few metres from the Entrance Gate, cartoonists displayed their day-to-day observations and shared some of the amusing things that happened during each day. It was one of the first spots I visited and enjoyed some of the cartoons, which presented events in humorous ways.

I have enjoyed cartoons ever since I began to read and understand my mother tongue and the languages I was taught at school. Though the press during my school days didn’t entertain cartooning much (it was almost an unknown art in Eritrea), on some rare occasions some brilliant cartoons infected me with the love for this art-form.

One of the brilliant cartoons I saw was printed in the 1980s, which satirized the education system of the days (a matter that demanded serious attention) and the kinds of people it produced, by exposing their responses to a social problem (another serious matter), in which they were expected to take a stand very different from that of the man on the street.

In it, the cartoonist displays a prospective graduate (in his black, flowing gown and his cap, which he struggles to balance and keep on his head) chasing an oxen (to be slaughtered for his graduation ceremony). He shows the graduate in an unpleasant situation, in which case he loses if lets the ox go, but also fails to restrain the ox. The graduate is unable to keep pace with the bull, hindered, as he is, by his long gown, which he tries to gather in his hand. This attempt makes it all the more difficult for him to chase the ox.

Though a simple drawing with no speech bubble or caption, it had a profound message for its audience. It commented not only on the extravagance that came with graduation ceremonies (a social evil that plagued Eritrean urban dwellers) but was also a scathing criticism of the education system of the time. It truly was (for its audience) the proverbial picture that speaks more powerfully than a thousand words.

Through it, the cartoonist really killed two birds. His comments on a social problem was pointed.

However, more importantly, his comments on education, I believe, was the more powerful.

After viewing the cartoon, one is made to think about both issues, which the cartoonist fuses into a simple drawing: “How effective can the education system be if it produces graduates that think in the same ways as the uneducated or the unlettered? What difference does their education produce?” But one is also not allowed to forget that societies that encourage fruitless and wasteful ceremonies sustain financial loss, which, in turn, leads to a life of poverty. In other words, the education system, one is made to think, was not only poor but perpetuated the financial and intellectual poverty of the society.

If I had the skills, the capacity, and the energy, I would be a cartoonist. I find cartooning as fascinating and as enjoyable as poetry. If well-done, it is as sweet as music and as satisfying as a beautiful work of art. As an artist, it helps you say things as concisely as and, if well-thought out, with the same effect as a good joke. It stays with the audience for a long time, and often is not forgotten even after decades. The thoughts it produces enlivens your thought and makes you see things in a new light.

Though it depends on a cartoonist’s drawing skills, cartooning is different and separate from painting, which is unlike cartooning (which makes separate demands on the artist), and is different from the former in its purpose. Painting tries to achieve its purposes by depicting beauty as an artist tries to share his or her feelings with his or her audiences, and how he or she sees its subject. Cartooning, on the other hand, satirizes, makes fun of its subjects, and exposes the folly of certain people, their actions, behaviours, and decisions. In a way, by exposing people’s follies, cartooning encourages people to learn from other people and gain experiences, which enrich their inner-life.

In Eritrea, newspapers and magazines such as Haddas Eritrea, Hizben Polisn, and Mensey (but especially Mensey) present their readers with cartoons on social, economic, and other issues though not as often as cartoon-lovers wanted them. Often, the cartoons present simple drawings with a dialogue or a speech bubble and, through them, the cartoonist’s opinion about the subject. Many cartoons highlight how a certain course of action could alienate a person from the society, and suggest how that individual can live in harmony with the values and mores of the society. Generally, the cartoons do not try to make fun of or satirize but often point out the dangers of trespassing social values and norms.

One of the most common themes featured by cartoonists is the fashion of the young (especially, fashion of young women), which is often viewed to be in conflict with the dress code and proper behaviour of the society, though themes such as music, education, and the environment are also featured. On fashion, Eritrean cartoonists have used their craft to criticize what they saw as unsuitable or improper fashion, which is not to the taste of the society. In one cartoon (by Abahagoi), a young woman, wearing an uncommonly short dress, asks her father his opinion: “How does the dress suit me?” “First, get dressed,” he answers. “You haven’t shown us your new dress yet?”

In the early 1990s, I remember Haddas Eritrea printing cartoons on almost daily-basis, and people enjoyed them. About two decades ago, Sewit, a cartoonist of some renown in Eritrea, to the delight of many cartoon-lovers published a book titled, ‘Elal Ms Sewit’ (literally, A Chat with Sewit) in which he had his readers enjoy brilliant cartoons on a number of social issues. This small but very enjoyable book, to my knowledge, is the first cartoon book in Eritrea. Shadushai Werar bCartoon (The Sixth Offensive through Cartoons), another book of cartoons which tries to capture the preparations, the sentiments, and feelings of the fighters, and the heroism with which the Offensive was repulsed, also appeared some years later.

Despite such attempts, however, I believe cartooning is not a very developed art-form in Eritrea due to some factors. A colleague recently told me that he learnt English as a high-school student in the 1960s with American comic-strips, which US Peace Corps teachers used with their Eritrean students. But I think such decisions (on the part of the American teachers) depended on individual teacher tastes (and not because cartoons were used in Ethiopian textbooks). Neither were cartoons used to teach Amharic or Tigrigna, during the Federal period and before it, the British period. In the 1980s, the Ethiopian Curriculum didn’t make use of this art-form for the teaching of the two languages in offer (Amharic and English) or the other subjects.

As an art-form, cartooning is a recent arrival. I believe, if used at all, it was not employed often enough in the newspapers published during the Italian, British and Ethiopian colonial periods. If there ever was any cartooning during these periods, it didn’t, unlike music and drama (which enjoyed the support of the Eritrean people, who, in turn, used them in their fight against their colonizers before and during the Armed Struggle), get to the hearts of the Eritrean people.

I believe cartooning has not developed in Eritrea as much as it should because as an art it demands whole-hearted commitment. Most Eritrean visual artists, for example, painters have directed their energies, skills, and time to painting, as can be judged from the repeated art exhibitions they presented, which almost always focus on paintings. Eritrean painters exhibit their skills, offer courses for would-be painters, as they try to teach their skills to the young. Art Schools teach drama, music, painting, but not cartooning. This could be because cartooning, as an art, doesn’t help artists earn their bread. A few have tried to do both but I don’t think they have succeeded because both are full-time occupations, and both are demanding.

Cartooning can’t be an appendage of painting or other forms of visual art. Judging from the works and lives of cartoonists from around the globe, one draws the conclusion that it is an art form that commands the full attention of professionals. Cartoonists are required to keep abreast of events in their countries and beyond their national borders. Moreover, cartooning demands creativity, imagination, and a good knowledge of the subjects or people they cartoon about, which doesn’t come easy but comes with lots of hard work and reflection. For these reasons, only a handful of Eritrean artists interested in visual art, as far as I know, have given their lives to cartooning.

Cartooning is a profession by itself. Once one is married to it, like a jealous wife, it won’t allow any rival. For reasons mentioned above, I don’t think Eritrean painters are inclined to marry this jealous wife.