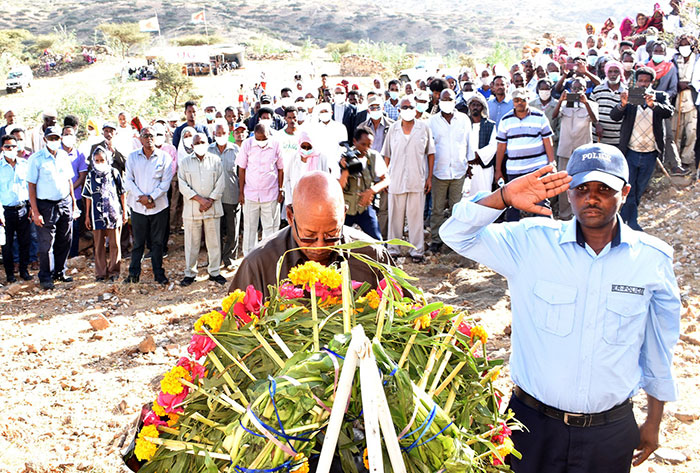 Keren, 03 December 2020 – The Ona and Besekdira Massacre was commemorated for its 50th anniversary on 30 November and 01 December in both villages.

At the commemoration event, Ambassador Abdela Musa, Governor of Anseba Region, a number of Government officials as well as village elders and survivors took part.

In a speech delivered, Ambassador Abdela pointing out colonial forces of Ethiopia perpetrated heinous massacres against thousands of nationals across the country reminded the new generation to renew the pledge to live up to expectations and solidify national unity and build a prosperous country.

The Governor of the Anseba Region Ambassador Abdela Musa laid wreaths at the mosque in Besekdira and the Martyrs Cemetery in Ona. The event also witnessed cultural performances depicting the massacres.

Survivors on their part stating that the event reminds us all to renew pledge of honoring the trust of martyrs called for the construction of martyrs’ statues in areas where massacres were perpetrated by colonial powers.

The colonial forces of the Ethiopian Emperor Hailesselasie massacred 220 innocent nationals including 16 pregnant women at a mosque in Besekdira on 30 November 1970, and the next day, 1 December massacred 800 nationals in Ona.