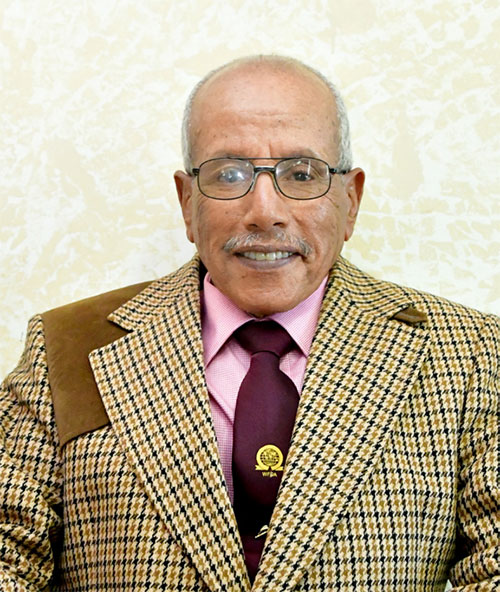 Mr. Kessete Teweldebrhan is an internationally renowned pioneer in healthcare, especially anesthesia and midwifery. In his lifetime as a nurse and nursing teacher, he has worked with devotion to extend anesthetist and delivery services to people in need. He has founded and directed the school of nursing in Ethiopia and trained over 250 nurse anesthetists, who have, in turn, trained over 2000 nurse anesthetists in both Eritrea and Ethiopia. He was also instrumental in establishing seven more schools of nurse anesthesia in Ethiopia. In recognition of his contribution, Mr. Kessete has been rewarded by several governmental and non-governmental organizations. Enjoy your stay with Mr. Kessete.

Mr. Kessete, would you please introduce yourself to our readers?

Thank you for inviting me. My name’s Kessete Teweldebrhan. I was born in February 1946 in a small village called Haryenin in Dekemhare subzone. I went to school in places as far from home as 8-16 km on foot. Then, I came to Asmara to continue to secondary school at Red Sea Secondary school. Afterwards, I joined the school of nursing in the academic year of 1962-1963.

So, that’s where the real journey began?

Right, the school of nursing was one of the prestigious institutions. It was a 4-year program and included comprehensive nursing and midwifery. I graduated on November 11, 1967 as a registered professional nurse and midwife. Throughout my school days, I scored excellent results and was called student of the year in my last year at the nursing school.

What happened after that?

As soon as I finished school, the Ethiopian government at that time decreed that all vocational students be transferred to mainland Ethiopia and serve there. So, I went to Addis Ababa and was sent to a referral hospital in Harar as surgical and maternity ward head nurse, Operation Room assistant to the surgeons and gynecologists, OPD assistant and blood collector.

My time in Ethiopia was a time when I gained an extensive amount and quality of experience in addition to the time I worked in Eritrea. It was very hectic and demanding. Along with a diligent female coworker, I was on call 24/7 for all difficult delivery and operations. When I worked there, young women in difficult labor were coming from places that were more than 200 km away. Most of them had uterine rupture, in shock and very fatal situations, with their babies struggling.

How did you take that?

It was very traumatic for me. I asked the hospital admin why the women in labor did not go to hospitals with caesarian sections, and they said there were no anesthetists. Now, that was a driving force for me. Since I was promised a scholarship in a year for my top grades at school, I aimed at taking anesthetics and give relief to the difficult deliveries and deaths of women and children. Unfortunately, I didn’t get my scholarship and enrolled in an extension program to study accounting before I was transferred to Asmara. In Asmara, I worked as the first male midwife in both Eritrea and Ethiopia. I worked at Melotti Maternity Clinic, now the National Maternal Referral Hospital, for three years before I was appointed as a head nurse in a surgical ward for a year.

What about your scholarship?

I put a perpetual push to get a scholarship. I went to Addis Ababa after the fall of the Imperial Government of Haileselasie to apply to a United States anesthesiology university. But with the coming of the communist Derg regime to power, it was made clear that all the scholarships to democratic nations were cancelled. Instead they proposed that we go to Cuba or Russia, which we declined. Then I started studying at Tikur Anbesa Hospital, which was then a recently founded school of anesthesia by the agreement of the Ministry of Health of Ethiopia and the Swiss Government. After studying for two years, I was placed to work in Neqemti, Wolega. I was the only nurse anesthetist in that place. I had to work with all the hospital departments 24 /7. I was so busy that I couldn’t leave the hospital for more than an hour.

For how long did this go on?

I worked there for four years and was then transferred to another hospital where I worked for three years. Later, the Ministry of Health of Ethiopia tried to open a residency program for surgery but it couldn’t because there was lack of anesthetists. Complaints from many regions were placed as people died due to lack of emergency surgeries. Then, the government took a step to send students abroad to study anesthetics, but the mission failed. Therefore, they proposed for experienced teachers to come from abroad and teach in Ethiopia at any cost.

Prior to that, the WHO along with some concerned international organizations, summoned the world anesthesia leaders and pioneers to address the issue of mortality due to lack of anesthetic services. They urged the anesthetists to develop a universal standard anesthesia teaching manual. After it was designed, we were the first to get the safe and adopted manual.

The Ministry decided to select educators from the preexisting nurse anesthetists, and I was recommended. But since I was already granted a recommendation to leave for higher education, I refused several times but was summoned few days before my departure to Warsaw, Poland, to study medicine. They had reviewed my previous credentials, files and performance appraisal, which was ranked among the highest. Then I was given full charge over the curriculum design for the school of nurse anesthetics that was to be opened.

I agreed to teach for one term and then go on with my scholarship by 1982 and started the school of anesthetic nurse in Ethiopia. Time flew and they did not uphold their end of the bargain, but the experience was very precious. I taught there for eight years and every two years, we opened surgery, gynecology and obstetrics, orthopedics and ophthalmology residence programs. We designed a new curriculum for doctors specializing in anesthetics with an American Dr. Hue Westgates. Then I was allowed to go to the US University of La’ Roche, Pennsylvania, and was the first black student to get a gold medal award. I went back to Ethiopia two months after Eritrea’s liberation. After resuming my work for a while, I applied for higher education but didn’t succeed. In June 1998, I was deported to Eritrea along with the people who were forced to leave Ethiopia then. Back then, I was about to receive a Doctor of Medicine from the University of Bern in Switzerland

In my time there, I also founded and directed the Ethiopian Association of Nurse Anesthetists and served as its president for four terms.

Then, in 1999, we opened a school of anesthesia in Asmara. I have been working as an educator to this day. It is all the work I have described that has earned me a recognition internationally.

I hear you have achieved many victories and awards in your field. What do you say about that?

Before the latest 2020 award, I was given preliminary recognitions. In December 1996, I was included in the ‘Who is Who’ in Medicine and healthcare. It was the first edition of its kind as a definitive register of distinguished health professionals from all over the world. In 2002, I was included in the international honor society in nursing with a rank of community leader. In mid-2005, I was honored by the American surgical group, Doctors United for Medical Missions (DRUMM) to receive a silver platter as the unparalleled anesthesia educator in East Africa. In 2007, I was given an accolade by the World

Federation of Societies of Anesthetists as one of the first two profiled anesthetists from Africa along with Dr. Temba from Zambia. In 2014, in its Golden Jubilee Anniversary, the University of La’ Roche in Pittsburgh, Pennsylvania, USA, awarded me as one of the ten distinguished service gold medal award winners of its graduates of 50 years. In 2018, the Ethiopian Association of Anesthetists invited me to receive a distinguished gold medal award and I was named ‘The Father of Ethiopian Anesthesia’. It was followed by inclusion in the Ethiopian “Awde Seb”, similar to the American ‘Who is Who’, an association of monumental contributors in the country that so far has only 11 members.

All these awards and recognitions have led to the latest WFSA Distinguished Medal Award of 2020 in which only four from our field were selected worldwide. But it has been pushed back to September 2021 due to the ongoing pandemic.

Do you have any other message to our readers?

I want to thank all my supporters and thank you so much for inviting me.