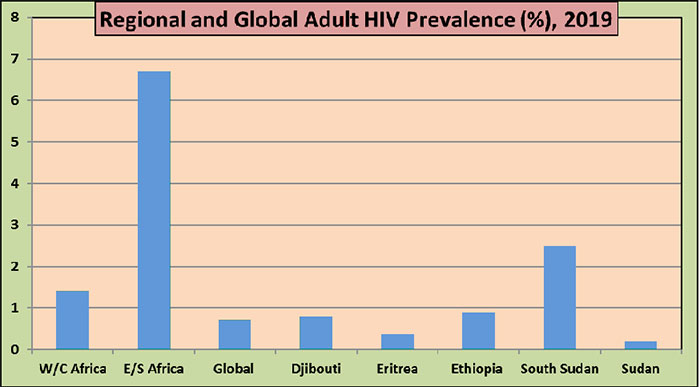 On 1 December last week, World Aids Day was commemorated around the globe. In Eritrea, where the special day was marked for the 29th time, several events were organized, while Eritrea Profile also featured a number of articles in connection with the day (including “World AIDS Day: Global Solidarity, Shared Responsibility” and “World AIDS Day Observed Nationwide”). An important theme running through both the organized events and the media articles was recognition and celebration of Eritrea’s HIV-related progress and achievements since its independence. In today’s article, I delve further into the topic, helping to contextualize and shed further light onto Eritrea’s fight and success against HIV/AIDS.

First, according to health officials, Eritrea’s estimated HIV prevalence rate in 2019 was approximately 0.37% (estimated for adults). This is the lowest figure recorded for Eritrea since 1990 (the first year for which data exists), and it continues the long and steady downward trend in HIV prevalence in the country. Should things continue to follow the established trend (and there is little to suggest otherwise), Eritrea will have a prevalence of almost zero in the not too distant future. Notably, Eritrea’s HIV prevalence rate is distinguished as among the lowest in the Horn of Africa region, as well as considerably lower than the continental or global average. For instance, regional and global prevalence rates for 2019 are as follows: Western and Central Africa – 1.4%, Eastern and Southern Africa – 6.7%, Global – 0.7%, Djibouti – 0.8%, Ethiopia – 0.9%, South Sudan – 2.5%, and Sudan – 0.2%. Last, it is worth mentioning that Eritrea’s HIV prevalence is not too far off the prevalence rates of countries in Western and Central Europe and North America, which have the lowest rates in the world.

Second, Eritrea’s continued success against HIV/AIDS is rooted in a number of different factors. Since I have provided more comprehensive accounts in previous articles and other places, I will only briefly touch upon a few here.

To begin, we are all aware of Nelson Mandela’s popular statement that, “Education is the most powerful weapon you can use to change the world.” However, less known is that the former leader of South Africa additionally stated that, “Education is also a weapon that the world cannot do without in the fight against AIDS. Education saves lives.” Eritrea is a useful example of this second quote, as education, particularly for girls, has been one of the most important factors in the country’s battle against HIV/AIDS.

Over many years, there have been high and increasing prevalence rates in girls and women across Africa. According to UNAIDS, in sub- Saharan Africa, five in six new infections among adolescents aged 15-19 years are among girls, while young women aged 15-24 years are twice as likely to be living with HIV than men. A lot of this has to do with contrasting gender roles, gender-related inequalities, social pressures, and a lack of economic power. In terms of education, when girls lack knowledge, skills, training and opportunities associated with formal schooling, they are often at a considerably greater risk for HIV (through engagement in risky sexual behaviors, such as transactional sex, more or older partners, lower rates of condom use, and earlier sexual debut, among others). However, more education provides girls with greater economic options, independence and autonomy, and awareness of their rights – all of which can help them stay safe. Moreover, schools offer girls specific HIV education and life skills training, which are important and practical tools that can dramatically lower their vulnerability to HIV.

In Eritrea, education and the elimination of gender disparities have been a priority since independence. Basic education is compulsory for both girls and boys. Furthermore, the country has adopted a policy of universal free education from pre-primary to higher education, ensuring that every child, irrespective of background, distinction, or status, has the opportunity to enroll in education, become literate, and maximize their potential. Additionally, various support services are provided, including school feeding programs and support with school uniforms, textbook charges, and activity fees, to increase attendance and support retention. Last, countless roads have also been established, alongside substantial expansions in public transport services, thus improving ease of travel and accessibility to education for all.

Overall, support for and prioritizing young people, especially girls, getting and staying in school has been  an important factor in Eritrea’s fight against HIV/AIDS.

Another important aspect of the country’s fight against HIV/ AIDS has been the provision of antiretroviral treatment (ART). Although there is no cure for HIV, ART is recommended for all people living with HIV. Medical and treatment advancements mean that people with HIV can experience dramatic  improvements, live longer and remain active, and have reduced potential for transmitting the virus to others. Standard ART, which consists of a combination of antiretroviral (ARV) drugs to maximally suppress the HIV virus, helps to stop the progression of HIV disease, avert HIV-related deaths, and is a critical factor in driving down the rate of new infections.

In Eritrea, ART was begun in 2005. In a reflection of the country’s efforts to ensure equity and promote social justice, there are now nearly 30 ART sites in Eritrea dispersed throughout all six zones of the country. This is important because it helps to ensure accessibility to care and treatment for individuals living with HIV, including those who may reside in rural, remote, or sparsely populated areas.

Furthermore, while in many countries people living with HIV are unable to access ART due to financial constraints, in Eritrea ART is provided free of charge for all patients. Of note, rates of ART coverage and adherence continue to rise in the country, resulting in significant improvements in health and quality of life, as well as reductions in HIV-related morbidity and mortality.

Finally, public awareness campaigns have also been a strong component of the fight against HIV/AIDS in Eritrea, promoting early testing and helping ensure greater understanding of the virus. Importantly, with Eritrea being an ethnically diverse, multilingual country, safety messages and information have been developed and translated into all nine local languages and regularly disseminated through various forms of media. Additionally, information posters and pamphlets are found displayed in pharmacies, health clinics, shopping areas, on billboards and notice boards, and within other public spaces. Prevention and safety themes have also been integrated into health and life skills courses for students, youth clubs, different associations, and other organizations. Notably, public campaigns not only focus on safety and prevention, but also aim to eliminate stigma and remove negative attitudes towards people living with HIV/AIDS.

Over the past several decades, HIV/AIDS has remained among the world’s biggest challenges. In Eritrea, despite relatively modest resources, significant progress has been made in reducing infections and the national prevalence rate. However, there must be continued investment, commitment, and effort so that the country will, as in the words of many locals, “get to zero”.