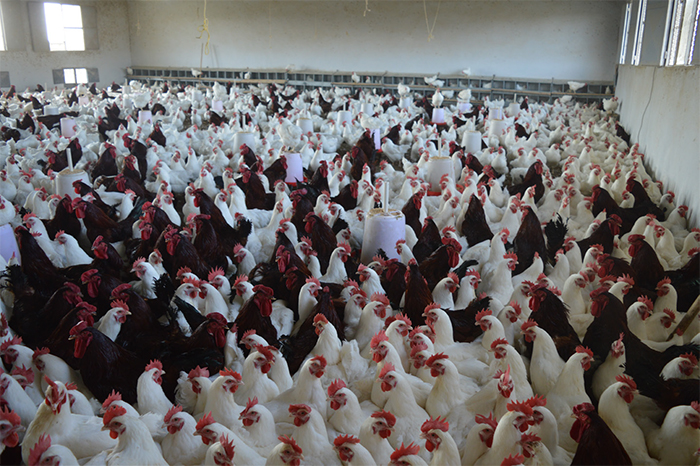 The Ministry of Agriculture is working to distribute around a million month-old chicks to around 40,000 families all over the country. The program is expected to last until the end of June 2021.
According to Ms. Saba Gebreselassie, Head of Poultry Development Unit in the Ministry, around 27,000 chicks are being d i s t r i b u t e d weekly to all regions starting from the end of June 2020.
“As of the first week of December 2020, 12,386 families have benefited from the program. The target is to reach around 40,000 families by June 2021.” stated Ms. Saba. 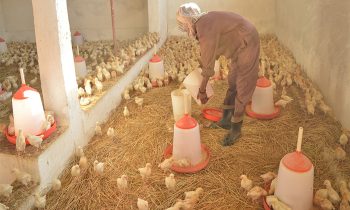 Ministry reports show that since Eritrea’s independence, the Government has distributed more than 43.6 million backyard chicks and around 3.9 million commercial chicks to more than 5.1 million beneficiaries.
According to Ms. Saba, this kind of distribution has played a great role in the establishment of a number of commercial poultry farms in the country and also transformed many Eritrean farming communities from traditional chicken rearing to small scale commercial and backyard poultry systems.
Finally Ms. Saba noted that the ultimate objective of the distribution program is to sell chicks at a very fair price to the tune of 15 Nakfa per one-month-old chick, for rural families so as to improve their livelihoods and promote nutritious diets. 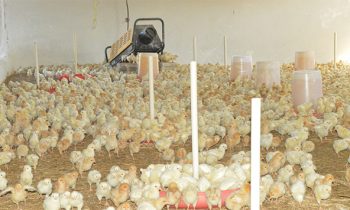 The Public Relations Division of the Ministry visited ‘Kehawta Poultry Center’ – the source of the chicks, Keren Poultry Brooding Station, and also some beneficiaries in Anseba and Central Regions. The report here provides insight in to different aspects of the program, poultry production and distribution; and success stories of some beneficiaries.

Background
The Ministry of Agriculture established Kehawta Poultry Center in 1993. Since then, the Government of Eritrea has imported many rounds of parent stock chicks (F1) and fertilized eggs from various reputable European poultry breeds in order to distribute month-old chicks to ordinary farmers and day-old-chicks to commercial farms. 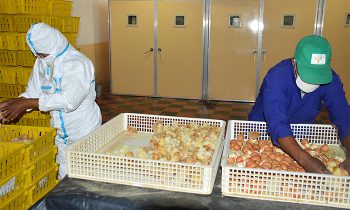 Production Section
This section is the chick entry point in the center. According to Ms. Almaz Gezae, General Manager of the KPC, this year, the center received around 8000 day-old parent stock in February 2020 from Hungary. The chicks are of two types of breeds: Tetra SL (6,000 chicks) and Blanka (2,000 chicks). They are being reared in two blocks partitioned in to four compartments with an area of 560 m2 each.
These chicken eventually started producing eggs at the end of June 2020, and they are expected to continue until the end of June 2021.

In describing the management, Ms. Almaz stated that the whole cycle of the poultry production demands special care and attention with regards to bio-security measures, supply of standardized nutritious feed and water as well as continuous health care for the chicks.
KPC is a plant that works around the clock in shifts. Thanks to the diligence of experts and other workers of the farm, no serious health issues have been registered yet. 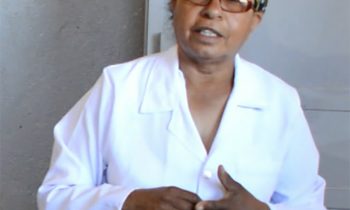 Egg Receiving Section
Ms. Almaz states that the eggs received from the layers are the most important component of the system because they are the source of the chicks to be distributed. For this reason, the eggs are carefully selected before they go for hatching. They should be between 55-65 grams in weight, have a standard oval shape and; be smooth and neat.

Fumigation Section
All the selected eggs are then transferred in to the fumigation room to be free of any harmful microorganisms. KPC uses potassium permanganate and formalin as fumigating agents.

Cold Room Section
To deter the eggs from producing embryo, at the wrong time, they are kept in a cold room (160C) for seven days. Then, they are transferred to a pre-warming area, where they stay there for 12 hours until they reach room temperature. 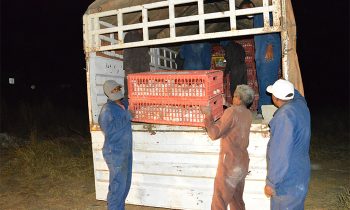 Incubation Section
This is one of the most sensitive components of the production cycle because it determines the number of eggs that proceed to hatching. The eggs stay here for 18 days at a temperature of 37oC. At this stage, the incubating machines are regulated continuously and readings for turning, temperature and humidity are taken every hour.
The KPC has four incubators with a capacity of 30,000 eggs each.

Candling Section
After 18 days, a process called candling is conducted in a dark room. This is to verify fertilization and hatchability of the eggs which have been in the incubators.

Hatching Section
KPC possesses four hatcheries with a capacity of 10,000 eggs each at a time. The fertilized eggs need to stay for 3 days in the hatchers at a temperature of 36.9 oC and with humidity of around 90%.
On average 27,000 eggs are hatched every week. The hatched day-old chicks are transferred to Keren Brooding Station.

Keren Chick Brooding Station (KCBS)
This is a station that receives day-old chicks weekly. It keeps them for a month before they are distributed to beneficiaries. 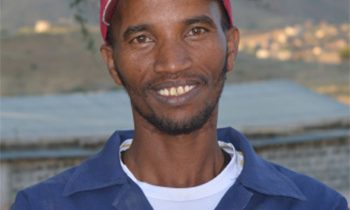 According to Mr. Semere Teklemichael, Head of the Poultry Development Unit in Anseba Region, Keren was selected for brooding chicks because the area is very favorable for poultry production.
Mr. Semere explained that the day-old chicks, as soon as they are hatched, are weekly transported with maximum care and standard bio-security measures from Kehawta Poultry Center to Keren Brooding Station on a weekly basis. It is to be noted that, so far 15 batches have been delivered to KCBS.
After the chicks are mature enough to be distributed to beneficiaries, experts from the brooding station transport them to the respective Sub-region’s agricultural branches to be distributed to beneficiaries every Saturday. 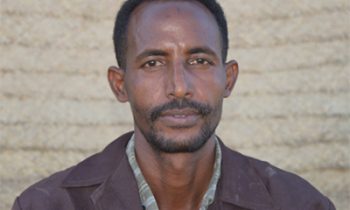 According to Mr. Fesseha Tesfay, Manager of the Keren Poultry Brooding Station, the farm has 12 small and 3 large chick houses with workers who are responsible for cleaning, feeding and taking care of the chicks.

Since the s t a ti o n receives day-old chicks every week, the receiving and brooding houses are cleaned and f u m i g a t e d continuously. Each house has its own heating devise to maintain the required temperature for the chicks. 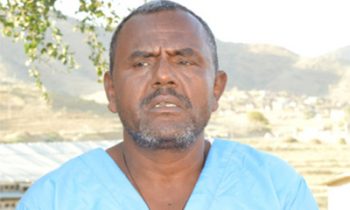 Dr. Teclemariam Teclemichael, Head of Animal Health and Production Division in the Anseba region explained that since chicks are extremely susceptible to diseases, utmost prevention measures and care is exercised.

He further explained that, “The health of the chicks is monitored every day. They are vaccinated for three major poultry diseases before they leave the station”.
The vaccinations given are known as B-1 on 6th day, Gumboro on the 14th day and Lasota on the 21st day.

According to Dr. Teclemariam, vaccination should continue until chicks reach four months. Beneficiaries are given provide information and advise to vaccinate their chicks at 3rd month for Gumboro and at the end of their 4th month for lasota. This is conducted with the help of animal health and production experts stationed at administrative village levels.

Thanks to the comprehensive care given at the station, the mortality rate of chicks is only about 5% which is acceptable. The mortality is mainly due to navel infection and birth abnormalities.

Beneficiaries
Mehari Russom is one of the beneficiaries of the distribution program. He lives in Tsihaflam Serejeka Sub-Region of the Central Region and used to have 200 chicken. 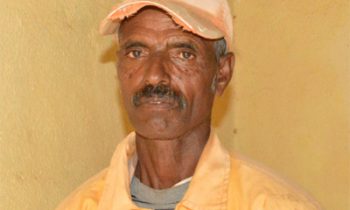 He said, “My family was very thankful for the previous consignment. Our house was full of surplus eggs and I am able to build a larger house for these chicks with the income I got from the sales. This time, my family has received only 50 chicks and we are planning to multiply them ourselves.’’

Beshir Mohammed Saeed is another beneficiary who lives in the Sub Region of Keren. He explained that he was inspired by his friend who improved his livelihood by keeping chicken. Mr. Beshir started to keep local breeds for some time. When the government began distributing improved backyard chicks, he consulted the animal production experts of the Ministry branch in his region on how to build their house and start a poultry farm.

“I took their advise in to consideration and started to think about how to prepare the feeders and waterers on my own. Since I am a potter, I made them out of clay with different sizes. I also crafted a waterer from used plastic packing material.’’ 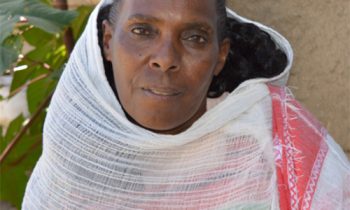 Currently, he feeds his chicks with different crops, green feed and domestic food leftovers. He also plans to cross breed the chicks with local birds to increase their number and productivity.
Ms. Nigsti Habtom is still another beneficiary of chicks distribution from Adihashela, in the Anseba Region.

Ms. Nigsti said, “This is the first time that I received chicks. I got 25 chicks which are month-old at a very fair price of 15 Nakfa each. I will work hard to make them more productive.”
She added that, “Before I got them, I prepared all the necessary feed from my crops and shelter for the chicks as per the advise of the agricultural experts. Since they are backyard chicks, they are also able to scavenge food on their own from the surrounding”. 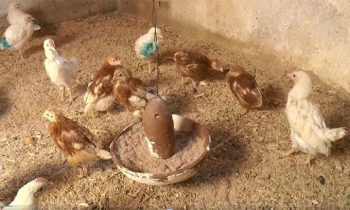 Ms. Nigisti provides the chicks with additional feed such as green feed, blood meal and meat meal. As a result, the chicks don’t cannibalise each other due to shortage of minerals.
According to the strategic plan of the Ministry, if such a distribution program continues effectively in a sustainable way, it will not be too long before Eritrea is able to be fully secure in eggs and poultry meat.