On reflection: the figure in the mirror 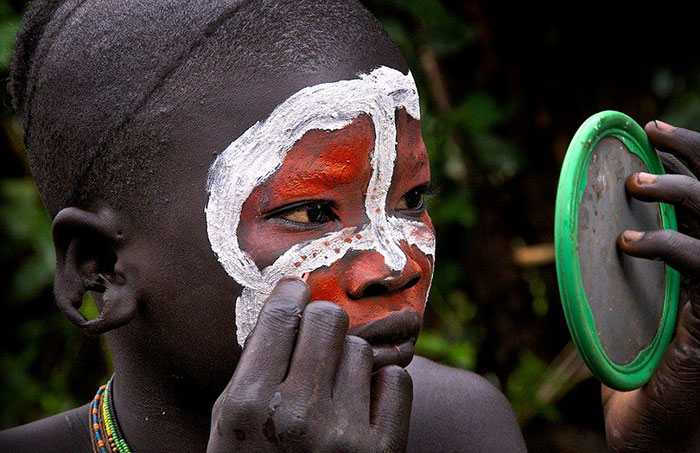 One day a missionary met a man in a remote African place. He took out a mirror from his bag and held it in front of the man.

“We call it a mirror,” replied the missionary proudly but at the same time started to wonder why the man did not bolt off the moment he saw his face’s reflection in the mirror.

“I know it is a mirror,” asserted the man in perfect Oxford English. “What I want to know is whether it is a Venetian or an Ordinary glass?”

On that day, our missionary learned that mirrors had been invented by Mesopotamians 5000 years ago while the ancestors of this Bible slinging missionary were still living in caves clubbing each other to death for mere procurement of dried bones and plump women.

It is told that ancient Egyptians used mirrors (probably polished metal) to reflect the sun’s rays into the dark chambers of the pyramids. They knew that working under a burning torch inside the pyramid left little oxygen to breath.

However, legend has it that it was a Greek who first used the mirror as a weapon of war. Archimedes built a big mirror, fixed it on a big structure and by turning it to face the sun at an angle, he was able, it is said, to burn many Roman ships that dared to approach the Greek shores.

Joannes Zonaras, a Byzantine historian of the 12th century, wrote: “At last, in an incredible manner, he burned up the whole Roman fleet. For by tilting a kind of mirror he ignited the air from the beam and kindled a great flame, the whole of which he directed at the ships at anchor in the path of the fire, until he consumed them all.”

Mirrors might have been favorites of Feudal lords who cared about their looks and battle attires, while women decorated their faces and necks in front of small circular mirrors in order to look as much different as possible from the lower class.

Eritreans probably used polished metals in the past as mirrors the way ancient Egyptians did. Failing that they must have availed themselves of still waters whose surface mirrored their images with high fidelity.

But mirrors are for the vainglorious. Our villagers, being anything but narcissists, tend to lean towards self-abnegation with more interest in their inner than outer perfection. That’s why you see more mirrors in towns that in villages.

Once upon a time a certain village went to town to visit a cousin. After identifying the house, he knocked on the door which opened promptly. Just opposite the opened door was a wardrobe fitted with a large mirror.

“Good day, my dear friend Sheka….” shouted the villager blithely and was about to shake hands with his own reflection in the mirror when his stretched fingers, in a collision course with the mirror, stopped in mid-air as the real people sitting inside the room broke into a loud laugh.”

The villager had seen mirrors before, but not of such size and clarity. And it has been years since he last saw his face in a glass mirror.

Another story has to do with a certain man who wanted to join the church friars. One day as he was still under examination prior to full acceptance as a Franciscan friar, he was discovered lingering more than was proper in front of a mirror that hang in the communal toilet. The next day, the father superior sent for him and when the latter reported for duty he was told to pack up and leave.

“What is the reason for my permanent dismissal? What did I do wrong?” pleaded the young spiritual recruit.

“You have been with us for only a day or two, yet you couldn’t resist the temptation of vainglory and self-attachment. The mirror is one more window for the devil to enter your heart,” said the Padre.

One more reason why our country people are not interested in mirrors is that the society is their mirror both in physical and psychological sense.

Go out with unkempt hair and friends are there to tell you about it. Stop a friend in the street and greet him warmly and he will tell you everything you wanted to know about your dress and looks.

“Are you okay, you have bloodshot eyes today…….. you look more healthy today than yesterday….you look depressed….did you put much oil in your hair….there is a red spot in your teeth, have you been eating raw tomato.”

If done within bounds of propriety I consider this a praiseworthy culture. In such a society, who needs a mirror?

However, there is danger in such a game. The same remarks or observation directed at women might result in offence and all out conflict.

In Europe such comments only produce an unexpected and painful response such as boxing in the ear or sharp slap in the face. In the case of old ladies, brace yourself for a good bang on the head with an umbrella.

When the Italians arrived in Eritrea, Eritreans learned something new about the old mirror. The first was that breaking a mirror entailed seven years of trouble. Setteanni di guai, as they put it. The second elevated the mirror to the status of a woman’s trusted counselor as regards beauty and all that goes with it.

Alas, the mirror is too honest and straightforward to remain woman’s best friend after the age of fifty. How many a woman turning fifty is at this very moment smashing mirrors because they refused to be dictated by her wishes and to be bribed by the excess flow of creams, balms and various types of oil enough to keep Egyptian mummies intact for another one million years.

Mirror, Mirror on the wall, who is the fairest of them all?

Past the age of sixty, the answer to this question is vague, but in fairy tales this ambivalence is translated by the cracking of the mirrors with subsequent heart ache of the one who refuses to give up the fight against old age and senility.

The other day, this writer was told by a friend that women tend to use smaller mirrors as they grow old. At the age of 17, they enjoy a generous reflection of their entire physique in the mirror. At the age of 40, they glance only at half of their body. At 50, a quarter of their failing constitution, at 60, only their face, at 70, a fraction of their face, at 80, their wrinkled eyes and noses, at 90, they hate their reflected images. And after that, they can only see death reflected in the mirror. They see the world they are leaving behind. Good-bye cruel world.

But what do we really see in a mirror? Perhaps, the other side of the universe, where we continue to live on when we die as reflections, without body.

They say that only man is conscious about his reflection in a mirror. Animals seldom care to give a second glance at their reflected images. Since man is a self-contemplating animal, can it be that the mirror is one good instrument to be used for separating the animal kingdom from human kingdom?
You just hold a mirror before all living things, and those who gaze at their reflection for more than a second should then be identified as human beings and those who don’t care a damn as animals or plants. As for those who stare at it for more than a minute, they should automatically be identified as women.