The Bicycle – the Machine that Has Become Eritreans’ Friend 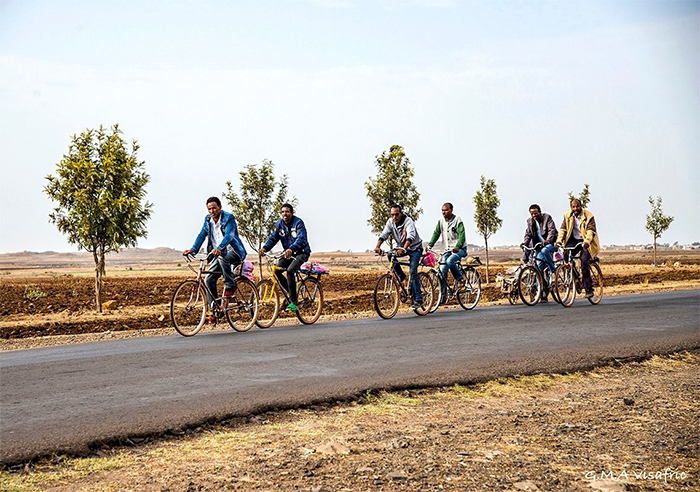 A traffic-policeman tried to find fault with how a priest rode his bicycle in town. He wanted to catch the priest breaking a traffic rule and watched him day-in, day-out, as the priest went about his daily chores in town. But the policeman could not fine him for the priest was an unusual one and broke no traffic rules.
“Why is that you never broke any traffic rules?” one day the traffic policeman asked the priest.

“I never break traffic rules,” the priest answered. “Because God is with me.”

“Father,” the traffic policeman happily answered. “You will be fined. You have violated a traffic rule. You have given God a lift.”

I don’t know what traffic rules are applicable to cyclists in other countries. In Eritrea, one of the rules cyclists are made aware of and often made to observe is ‘not to give a person a lift.’ The rationale is that a bicycle is made only for one person at a time, and no pair should ride it at a time. This is strictly enforced and has helped reduce cycling related accidents, though I see these days many cyclists give people a hitch, especially young women.

These days, in the streets in Asmara, one notices a few things that one didn’t observe a year ago. One observes a big number of cyclists, which is not odd, if one considers the fact that public transport (which encourages the spread of the virus) is still not functioning due to COVID-19, which has ravaged the whole world.

Not a small number of the cyclists are women, who didn’t really use the machine for transportation before the onset of COVID-19. You also notice that some of the bicycles are brand new, and that some of the riders (both male and female) are novice riders from the way they sit on the saddle, self-consciously riding their machines. They are ill at ease and sit upright, clutching the brakes tightly, ready to brake in case of imminent danger. They get off the saddles too quickly, in ways that betray their lack of confidence and tense psychological state. As the least experienced ride their cycles, one notices, their speed is measured, and they sway on the saddle as if a lifeless load with hands was on the saddle.

The bicycle, which, when introduced into Eritrea, was nick-named arebya sheytan (the Devil’s Chariot), has since then shed its uncomplimentary name because Eritreans learned how to use it, tamed the machine, and learned that if used properly, it could be as harmless as a lamb, and not as dangerous as they conceived it. Due to their changed attitude to it, the bicycle has become many Eritreans’ best friend, including children. In fact, the Eritrean child learns to ride the bicycle before he properly starts reading his books, and his first request of his father is for a bicycle. “Daddy, when will you buy me a bicycle?”

In the past, many bicycle repair-shops in Asmara had bicycles for hire, on hourly basis. In the 1980s, children could hire a bicycle and ride it for an hour for only 50 cents.

“I didn’t hire bicycles from shops,” a friend in his sixties, who learned how to ride a bicycle much earlier, told me. “One need have only 5 cents to hire a bicycle.” Eventually, the shops raised the charge to 10 cents an hour. He told me that neighbourhood children whose fathers had no bicycles and could lay their hands on no bicycles were the main customers of these shops. Other children, who were luckier, and had a bicycle in the family, slipped out of the house, rode their fathers’ bicycles and learned how to ride it the hard way. They did the same if a visitor with a bicycle forgot to lock it. If he did, they would plead with him to lend them the bicycle for a few minutes. “Don’t worry,” they would say. “I will be careful and make sure that your bicycle is not damaged.”

Since the bicycles were too big for them, they could not properly use the saddle, and slipped one of their legs under the crossbar in an attempt to reach one pedal. To reach the other pedal, they held the handlebar, in a way that deformed their appearances. It made them appear as if they were riding the bicycles from the side. It was a very uncomfortable position and made riding a very laborious activity.

But, whatever the price, the machine had to be tamed. Each child (who was willing to tame it) paid the price in bruised hands, and lumpy heads, or broken fingers or legs.

Family members helped in the effort. Some fathers or older brothers chose some secluded places, took the child and the bicycle there, and practically taught them how to ride it. They spent hours trotting after them, with one hand on the saddle, and kept the learner on it, encouraging him to pedal and not lose his balance. Orally, they (as good teachers) instructed their sons or their brothers how they should go about it, and what to do to avoid falling off the machine.

If, by any chance, the child falls, they teach him the principles of bicycle training: “You can’t learn how to ride a bicycle without some accidents,” the learner is told. “Once or twice you have to fall of your bicycle. That is unavoidable. If you are not willing to have bruised hands or legs, don’t touch it. Learning to ride a bicycle is like swimming. If you are afraid of getting wet, you don’t go to the sea. It is the same with learning bicycle-riding. If you are afraid of bruises and lacerations, you stay away from the machine.”

Sadly, until recently the bicycle has been a male machine. A woman riding a bicycle was a rare creature. Parents didn’t encourage their daughters to ride bicycles though some female students have gone against this bias, as they taught themselves how to ride it and rode them to school. For this reason, one sees many high school girls riding their bicycles to school, whose sheds are crowded by these machines. The majority of students, however, either walk, use a bus, or take a mini-bus to school.

Unfortunately, once these girls graduated from high school they stop using their bicycles and start using other means of transportation. A friend said, “The bicycle had a kind of stigma attached to it.”

If one used it, he said, he is accorded a lower status, in the society. He is treated differently from the one who doesn’t use it. He is seen in an unfavourable light, and is thought of as a person unable to lift himself out of poverty all these years, especially if he has used it for many years. I think such an attitude is infectious, and young women quickly catch it. For this reason, they don’t want to have anything to do with it, and be tainted by the low-status it symbolises. They would rather wait for a mini-bus, a taxi or a bus than ride a bicycle to work, or to town. Thanks to COVID 19, this is now changing, and I hope it will last.

“A bicycle?” I have heard many speak appreciatively of the machine. “It is a blessed thing. It doesn’t ask for fuel. Neither does it ask for a garage. Nor does it keep you waiting, like a bus. In a word, it is a wonderful thing.” Most importantly, the bicycle doesn’t pollute the environment. This is all true. But, it is not the whole truth. The machine also needs continuous up-keep: cleaning, oiling, and maintenance. Otherwise, when you assume that it is roadworthy, unknown to you it has gone flat.