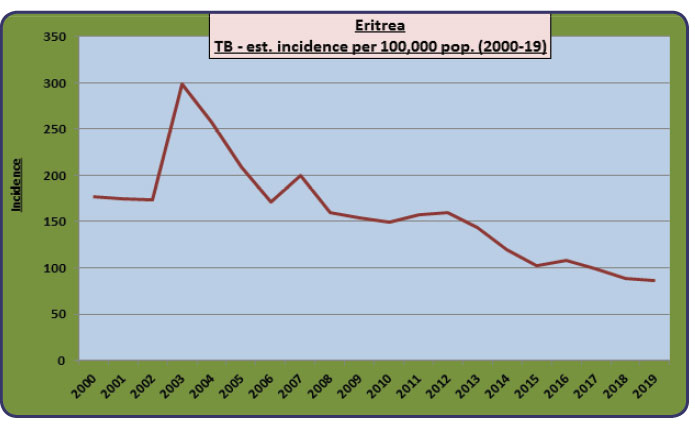 Last week, Sister Hiwet Neguse, Head of the National Tuberculosis (TB) Controlling Program at Eritrea’s Ministry of Health, revealed that Eritrea has made considerable progress in combating TB over the past several decades. This news is extremely positive and highly encouraging. It is worth noting, as well, that it comes not too long after recent reports were shared revealing that the country had achieved great success in the fight against HIV/AIDS. In the following few paragraphs, I provide a brief introduction about TB, report some of Eritrea’s TB-related figures, and identify some of the factors that have contributed to its success against TB.

TB is caused by bacteria, called Mycobacterium tuberculosis, that most often affect the lungs. It is spread from person to person through the air. When people with lung TB cough, talk, sneeze, or spit, they can expel TB germs into the air. Subsequently, another person needs to inhale only a few of these germs to become infected. Those individuals with compromised immune systems, such as people living with HIV, malnutrition or diabetes, or people who use tobacco, have a higher risk of falling ill.

As with COVID-19, TB is a truly global problem, and it is found in all countries around the world.

Moreover, it is non-discriminatory. In particular, although it mostly affects adults in their most productive years, children can also become infected. According to the World Health Organization (WHO), in 2019, an estimated 10 million people fell ill with TB (with 1.2 million children falling ill), while it also led to death of 1.4 million people. Notably, worldwide, TB is one of the top 10 causes of death and the leading cause from a single infectious agent (above HIV/AIDS). While TB is a global issue, some regions are harder hit than others. In 2019, 30 high TB burden countries accounted for about 87% of new TB cases, while eight countries accounted for two thirds of the total (led by India and followed by Indonesia, China, the Philippines, Pakistan, Nigeria, Bangladesh, and South Africa).

Over the years, Eritrea has achieved significant success in combating TB. In fact, its TB-related figures and progress are not only among the best in the surrounding region, they also compare quite favorably with continental and global averages. For example, according to data from the WHO, in 2000 Eritrea’s estimated TB incidence (per 100,000 people) was 177. Nearly two decades later, in 2019, the latest year for which data are available, the incidence was 86, representing a 51% percent reduction. For context, in 2019, the estimated TB incidence (per 100,000) for other countries in the region, as well as regionally and globally, was the following: Djibouti – 234; Ethiopia – 140; Somalia – 258; South Sudan – 227; Sudan – 67; Sub-Saharan Africa – 231; and World – 129. Furthermore, in terms of reduction rates, globally, the TB incidence has been falling at about 2% per year and between 2015 and 2019 the cumulative reduction was 9%. By comparison, in Eritrea, the rate of reduction between 2015 and 2019 was about 16%.

Eritrea’s success in combating TB is rooted in several different factors. For instance, the country has sought to ensure that all people, including those with or at risk of TB, have access to affordable and quality care. Of note, he construction and expansion of various infrastructure (hospitals, clinics, roads, etc.), has increased accessibility and adherence to TB care and services.

Furthermore, there has been great focus on prevention, diagnosis, and treatment. Prevention helps to stop people with TB infection from becoming sick, averts suffering, and saves lives. Through TB preventive treatment, not only are Eritreans protected from becoming sick, the risk of transmission in the community is significantly reduced.

Efforts to improve TB diagnosis in Eritrea have also been intensified. Ensuring that people are correctly diagnosed can allow them to get started on the most effective treatment regimen as early as possible. One unique and effective way that TB diagnosis and treatment coverage has been expanded in the country has been through the deployment of village health workers to rural, remote areas. At present, about 13% of TB patients in Eritrea are treated by village health workers. In terms of treatment, Eritrea has a high TB treatment success rate. In 2018, the latest year for which data is available, the country’s treatment success rate was 92%, which is higher than the regional (82%) and global (85%) average treatment success rates. 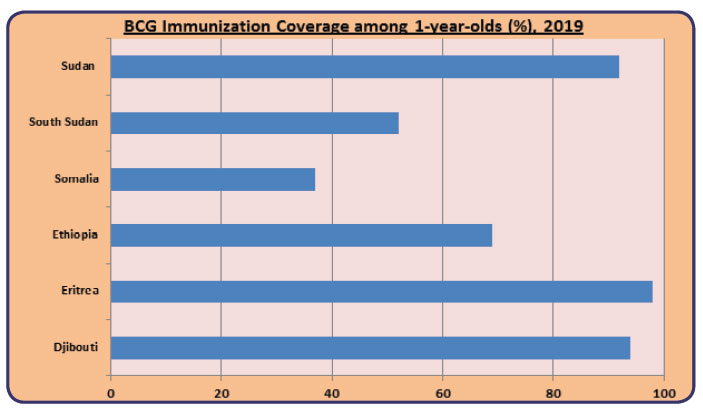 Notably, Eritrea also has a high Bacillius Calmette-Guerin (BCG) immunization coverage rate. The BCG vaccine, the only available TB vaccine, was developed almost 100 years ago. Although it offers limited protection against TB in adults, it protects young children against severe forms of TB. (However, it is sometimes offered to adults who are at risk of TB, such as some healthcare workers.) According to data from the WHO, BCG immunization coverage among 1-year-olds in Eritrea was about 89% in 2000. Last year, the most recent one for which data was available, it was about 97%. For context, in 2019, BCG immunization among 1-year-olds in the region was the following: Djibouti – 95%; Ethiopia – 69%; Somalia – 37%; South Sudan – 52%; and Sudan – 92%.

Another important factor in the success against TB has been Eritrea’s efforts to combat other risk factors or conditions that impair the immune system, such as HIV, malnutrition and under nutrition. Efforts against HIV go closely hand in hand with the fight against TB since HIV and TB form a lethal combination, each speeding the other’s progress. Notably, people living with HIV are approximately 18 times more likely to develop active TB disease than people without HIV, and in 2019, about 208,000 people died of HIV-associated TB. In terms of nutrition, Eritrea’s Health and Nutrition program, led by the Ministry of Health, in partnership with UN agencies, such as UNICEF, works to prevent and treat malnutrition and micronutrient deficiencies across different population groups and parts of the country.

Over the past several decades, Eritrea has made significant progress in the fight TB. While this is very positive and encouraging, there are still areas for improvement. While there has been greater public awareness about TB in recent years, there is still a lack of proper understanding in some parts of the population. Accordingly, public education and awareness campaigns can be increased and broadened. Additionally, there are drug-resistant strains of TB, which are a challenge because they are difficult and costly to treat. Last, the COVID-19 pandemic threatens to reverse the substantial progress made in reducing the burden of TB disease. Therefore, the country must continue with care and treatment programs to identify, diagnose, and successfully treat TB.

Graduation of Orotta College of Medicine and Health Sciences