Meet Robel Solomon, a painter who grew up playing around the studio of his uncles, two famous Eritrean painters, Michael Adonai and Berhane Adonai. Inspired by his uncles, Robel learned how to paint and enjoyed experimenting with different styles of painting when he was a child. Through his artistic works he was able to get international recognition by participating in art competitions.

Robel Solomon was fortunate to be born into a family that has renowned painters in the country. He grew up watching art, painting. Most of his childhood memories are in a studio.

He said, “Being raised by painters was a privilege. I grew up learning all the steps one by one. I was shaped to be a painter when I was a child.”

As a child, Robel enjoyed experimenting with different styles of painting, which has led him to believe that he doesn’t want to follow any particular style. 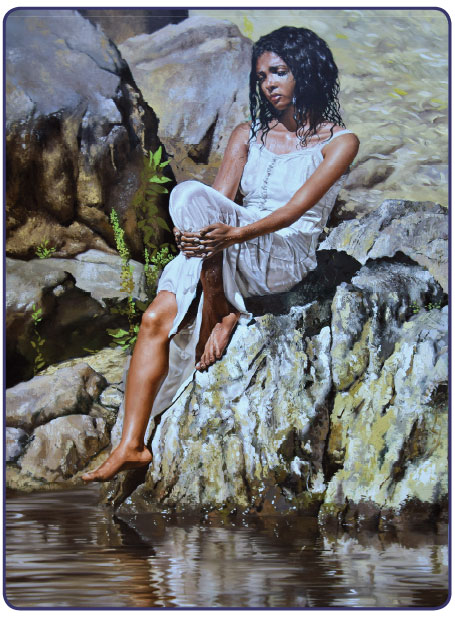 He said, “I seriously don’t want to say my works follow a specific style. I grew up inspired by many artists and the technical aspects they follow. I even remember that, at some point, I was trying to imitate my uncle’s, Michael Adonai’s, style of painting. I loved and admired him so much. Growing up, he was my hero. But I later found myself to be into completely different styles.

Just like most beginners, I started off painting with Realism. However, through time I shifted to painting modern art. Besides, I have worked on impressionism for so long which has helped me to know more and well about colors. Shifting to modern art wasn’t a challenge since it is similar to impressionism in how vibrant the color can be and how to form and deform the paintings. Again, I did an exhibition under the theme ‘Emotions’ and presented dripping style paintings, which got me out of my comfort zone.

Later on, in a year or so, I did another one with figurative style of painting. I don’t want to have to follow a particular style. My paintings reflect the period I am in. I think that is one of the reasons that confuses my audience since I put on exhibition different styles of paintings at different times.”

Having been introduced to many of the world’s greatest artists and their skills and techniques, Robel studied them thoroughly and manages to bring them to life through his imagination. All his experiments and research have made him think that art should not limit the artist’s ability to experiment,
Robel said, “My principle is that art should be free. That is how I view art. I don’t plan to do something and go paint, not even for my exhibitions. I just paint what I am feeling, how I view things and how I understand them. That is how I paint my ideas and feelings. Most of my audience respond to and talk about my paintings in realism, but I don’t believe most of them understand them fully. ” 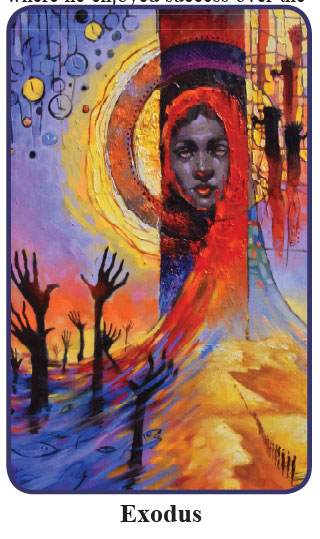 In his early teenage years, Robel officially started to take part in many big art competitions. From 2004-2011, this young painter on the rise became the winner of most of the competitions at the annual National Eritrean Festivals. Expanding his horizon as an artist, he then began to participate in competitions organized by the National Confederation of Eritrean Workers, the European Union, the American Center, Red cross, etc., where he enjoyed success over the years. Some of his paintings have been sent overseas and recognized internationally.

He said, “One of my biggest accomplishments is what I earned at the New Tang Dynasty International Figurative Painting Art Competition in New York, a competition that promotes realism paintings. ‘Hide Out’ was the name of the painting I presented, and it was selected from four thousand paintings that entered the contest from all over the world and became the winner of the Honorable Mention Award painting. Also, I participated at the 7th and 8th Beijing Banally which i was selected for, besides the 2nd International World Summit in Ecuador in 2018.

It’s always nice to see your works being recognized, but to participate in competitions, representing your nation, along with some of the biggest artists known worldwide is something else. When that happens, you aren’t just competing as an individual; you are the ambassador of your nation. There is no greater feeling than that.” 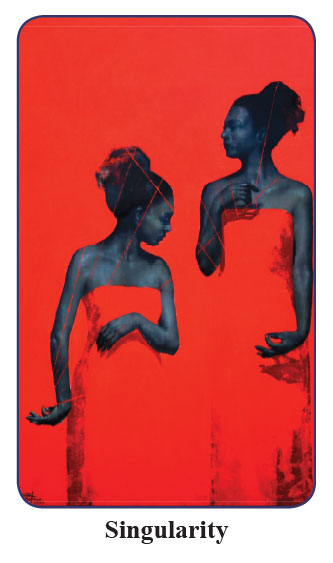 Besides all the competitions in which he took part, Robel is one of the artists who decorate stages for national holidays held in Eritrea. He believes that the Eritrean artists are one of a kind as they succeed in their career in spite of the many challenges they encounter as artists.

Robel said, “Think about it, we don’t have any sort of organization for our field, painting. We don’t have art institutions of high standard. Everyone here learns through trial and error, and still manages to produce works of art that can compete with those produced by artists internationally who have all the privileges in the profession. I think we are all doing well, and I want to remind everyone to keep up the good work.”

Robel ended our conversation by saying, “If you are working with passion, and haven’t gotten the support or opportunity to get somewhere, know that time will come, and you are going to shine; be patient and you will get there.”