Britanya: A masterpiece of women fighters 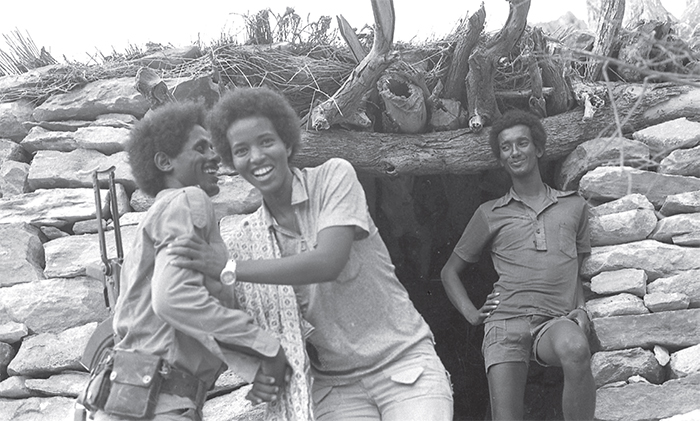 The woman in the photo is Alganesh kahsay, an Eritrean martyr who was best known as Britanya.
Like many of her peers and comrades, she joined the armed struggle for independence in 1977 in Keren. She was young but proved to be one of the best freedom fighters during the struggle. She bravely fought in battles and came out victorious.

Mr. Fitsum Ghebray, one of her former comrades and a photographer at that time who took several shots of her bravery, describes Ms. Alganesh as “brave like a lioness and compassionate like a mother.”
During the time she served in the 23rd brigade, 1st battalion, as a unit leader, her superiors promoted her to the rank of a platoon leader for her bravery and leadership quality. Britanya took care of her platoon, 30 young fighters, as a mother during relatively peaceful days and as a brave fighter in battle.

Mr. Fitsum said, “I had been on the same platoon with Alganesh for a very long time; so, I have seen enough to know her. She put aside some of the food during meal time to give to the youngest members of her platoon. If she got time to do laundry, she would take their clothes and wash it for them.”
According to former fighter and shooter of the photo on the side, Mr. Solomon Abreha, the photo was taken at a place called Taba Shglet, in the Sahel region of Eritrea, on 15th August 1986. “Before 1985, Shglet was one of our permanent traverses because for a very long time until 1985, it was under our control. Shglet was a strategic hill around the area. In 1985, the enemy attacked Shglet in an attempt to seize it back but was blown back by the Eritrean Army,” Mr. Solomon elaborated.

“Back then, my job as a member of the information brigade was to entertain and inform the army by traveling back and forth between liberated areas. We conducted exhibitions of the photos taken at battles and other events. So, the day I took this photo, I was with Britanya’s unit for the same reason. The man she is hugging in the photo was a member of her platoon that had been away to deliver messages.

After spending some time together, and with the way she organized her members, they had developed a familial bond. I was sitting somewhere in the dugouts when I heard the clatters. I run out to see what was going on; they all gathered around him to greet him.”

“At the same time, Britanya run to her comrade, got through everyone and hugged him. His safe arrival was what triggered that look on her face. I didn’t even get a second shot, it was the only one of that moment because like everyone else I was caught in the moment. That was our last encounter with Britanya, but I heard about her martyrdom later on.”

The story of Britanya goes way beyond just a compassionate fighter’s story. Her journey was hopeful, exemplary and, of course, brave. She fought not only the enemy but gender prejudices as well. 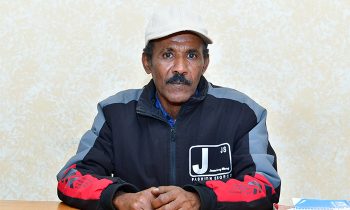 One of the basic attributes of the armed struggle was the social values that emanated from both the pre-established cultural values of the Eritrean society and the social norms that developed in the battle field. As Mr. Fitsum has put it, the Eritrean armed struggle was a stage that brought the fighters into a common understanding and principles. Though most of the pre-established cultural beliefs were good, there were also many that needed proper restructuring. That is why there was a need for the field fighters to establish a new set of values and norms that helped the smooth function of the missions of the front. But it is not easy to cut ties with the norms that you grew up with. One of the traditional beliefs many people went to the battlefields with was the chauvinist attitude towards women that portrayed them as weak and not equal to men.

However, when women joined the armed struggle in droves it became a big step towards breaking the backward mindset. As women fighters began to show their capabilities, they earned respect and were given high ranks in the front. Women like Britanya and many others proved their resilience, which helped to slowly but surely crash the oppressive outlooks against women.

Of course, there were few fighters that hadn’t detached themselves from the previously held prejudices. Britanya handled such people in an astonishing manner. Mr. Fitsum explained how she handled such a situation. He said, “When she was promoted to a platoon leader, one of her comrades complained that he was being led by a female. His attitude called for a load of disciplinary measures but Britanya blocked it and sought to explain and teach him about the concept of equality.”

After the annihilation of the Ethiopian Nadew command in 1988, which marked a turning point in the struggle for independence, Britanya’s unit was engaged in an intense battle around Keren. It was a time when the enemy deployed all of its might to seize back the strategic town of Afabet. In one of the battles, although Britanya’s unit was severely attacked, when another platoon next to hers needed support she was able to give the badly needed leadership to both the platoons and came out victorious.
Reflecting on what happened after the battle, Mr. Fitsum said: “Things cooled down and while her unit was relaxing, they started joking and playing around. Usually after battles, the topic is the latest battle. We all commented on Britanya’s bravery. Among us was the comrade that was still not entirely convinced about her leadership. He accepted her outstanding performance but he still couldn’t believe it. He stared at her in disbelief and said, ‘You guys, I tell you, this girl needs to be checked. I don’t think she is a woman’.”

Later on, Britanya was appointed to lead three platoons that had more than 100 fighters.

“That photo was a photo that shows the bright look that she always maintained, in war and in peace. She had a positive energy and treated everyone with care, just like in that photo,” Mr. Solomon Abraha said.
Britanya was killed in 1990 in an air attack at a battle around Ghindae.