Eritrea: Continued Threat Posed by COVID-19 Means It is Too Early to Relax 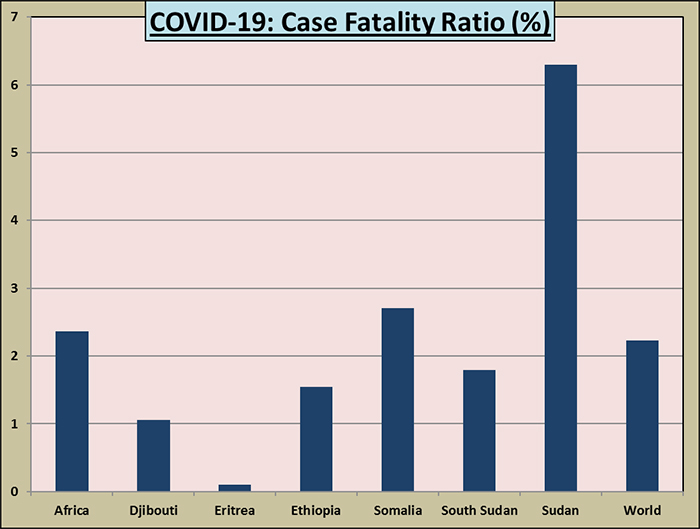 *Editor’s note: while Eritrea has had considerable success in controlling COVID-19, the country must remain vigilant.

It is now about one year since the coronavirus disease (COVID- 19), was confirmed in the world. Subsequently, on 30 January 2020, the World Health Organization (WHO) declared the coronavirus outbreak a public health emergency, and then in early March 2020 the WHO declared it a pandemic. Since the emergence of COVID-19, tens of millions of cases have been confirmed in countries across the globe, nearly two million people have died due to the virus, and the livelihoods of billions have been greatly affected. Notably, in recent weeks there have been surges in infections and deaths in many countries, as well as reports of the spread of new variants of the virus. Encouragingly, however, there are also some causes for optimism and hope. A number of COVID- 19 vaccines have been approved recently, with several countries around the world now administering vaccines to citizens in an attempt to achieve immunity against the virus. But transmission of the disease will not be curtailed until 70-80% of the population are vaccinated in the countries that have embarked on the programme at this stage. Logistical and production limitations also mean that vaccination is unlikely to commence in the vast majority of countries in many parts of our globe. 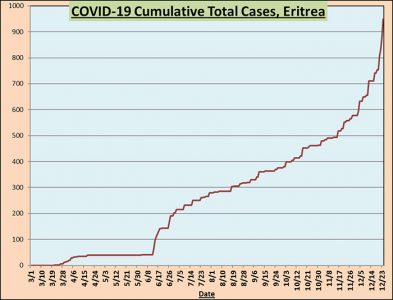 COVID-19 has been a truly global issue and no country can claim to have fully or decisively beaten the virus. However, some countries have been noticeably more effective in curbing the spread of the disease than others. Compared with its immediate neighbors in the Horn of Africa region, other countries across the continent of Africa, and many other parts of the world, Eritrea has had relative success in controlling the COVID- 19 outbreak in the past months. To date, it has reported 1 death and 951 total confirmed cases (most of which have been imported), with a case fatality ratio (CFR) of about 0.105%. (Note: the case fatality ratio is the proportion of individuals diagnosed with a disease who die from that disease and is therefore a measure of severity among detected cases.) By comparison, according to the latest data available from the WHO (early 25 December), the COVID-19 figures for neighboring countries, the region, and the world are as follows: Djibouti – 5800 cases (61 deaths, 1.052% CFR); Ethiopia 120989 (1870, 1.546%); Somalia 4690 (127, 2.708%); South Sudan 3455 (62, 1.795%); Sudan 23316 (1468, 6.296%); Africa 2577761 (60985, 2.366%); and World 77228903 (1718470, 2.225%). Eritrea’s figures are also especially notable since it is a low-income, developing country, has relatively limited healthcare facilities and few health workers, and shares long land and sea borders with countries that have had a significantly larger number of infections and deaths.

In previous articles featured within Eritrea Profile and elsewhere, I have noted thatthere has not been one single reason for why the country’s response to the pandemic has been generally successful. Rather, Eritrea’s general success – so far – in controlling COVID-19 has been rooted in an array of different factors. For instance, strong leadership and aggressive, quick action helped to prevent spread and bought critical time to prepare the health system, while systematic screening, tracing, isolation, and social distancing measures were important in severing local transmission. As well, clear, consistent, and frequent communication from the government and health authorities increased public understanding and dispelled potential misinformation, while public high levels of buy-in contributed to adherence with guidelines and safety measures. Citizens, at home and abroad, have also remained extremely generous, supporting a national fundraising campaign that involved financial and material contributions from individuals, businesses, religious institutions, associations, and cooperatives. Additionally, Eritrea’s lockdown has been significant, as it bought critical time to prepare, limited transmission, flattened any potential COVID-19 curve, and prevented deaths, while ultimately ensuring that the healthcare system was not overwhelmed. 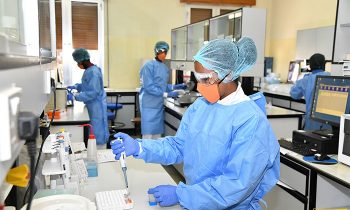 Of note, the country’s extensive past experiences and successes in controlling endemic and communicable diseases have also provided important lessons and strengthened the resilience of the healthcare system. Furthermore, the delayed arrival of the virus into Eritrea provided an opportunity to better understand the threats posed by COVID-19, extract valuable insights from other countries, and prepare a national-level response.

However, despite the country’s general success in controlling COVID-19 sofar, recent local developments should serve as a powerfulreminder toeveryone that the situation remains extremely serious and that the battle against the deadly virus is far from being over. In particular, earlier this week, Eritrea reported its first death due to the virus, while there has also been a recent noticeable rise inthe number of new confirmed cases. This week also saw the highest single day tally for confirmed cases in the country. Notably,new confirmed cases have been found in all regions of the country, including rural areas, and they include individuals with no recent history of travel abroad.

These recent serious developments mean that it is imperative the country remain vigilant and avoid any complacency. As individuals and a nation, we need to continue to do the things that have limited COVID-19 in our country to date, such asfully adhering to all safety guidelines and protocols. It is certainly true that the various restrictions and guideline measures can become frustrating and depressing, and that they have led to many significant challenges (including unemployment, livelihoods, education, and more). However, given the highly infectious nature of the virus and our country’s prevailing context and circumstances, we have few alternatives and must remain committed. Even minor lapses or transgressions of safety and health guidelines could have disastrous consequences. Also, we should keep firmly in mind the numerous doctors, nurses, health workers, and various security personnel that have worked so tirelessly and exhibited great dedication for months.

Ultimately, until we are able to access a safe and effective vaccine – which will take time – we must not simply relax or fool ourselves into believing the threat has gone. Just because we have been relatively successful against COVID-19 so far, does not mean that things cannot quickly deteriorate.

Water Resources Development in the Southwest Gash-Barka Part I