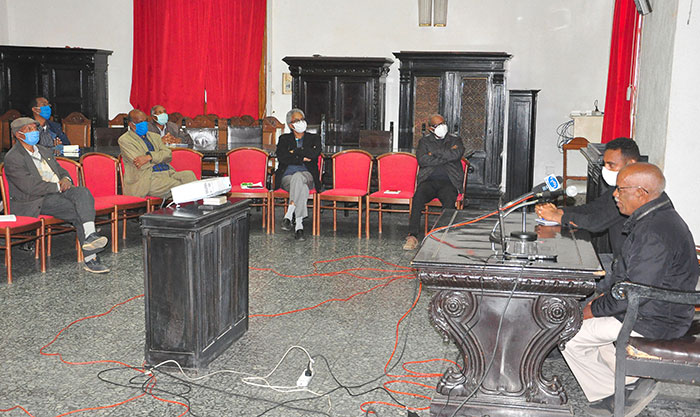 Asmara, 29 December 2020- Commendable pre preparation and integrated effort has been conducted to control the desert locust invasion that was observed in the Central region’s sub-zones of Berik, Gala-Nefhi, Serejeka and Akria. The report was made at an assessment meeting conducted today, 29 December at Asmara Municipality Hall.

At the meeting in which administrators of the sub-zones and line ministries as well as Development Task Force took part, Mr. Asrat Haile, head of seeds development in the region, said that the desert locust swarm that was observed in the sub-zones was fully controlled in cooperation with the public, members of the Defense Forces and agricultural experts before inflicting damage to crops and grazing areas.

Mr. Asrat went on to say that pesticide was sprayed on over 10 thousand hectares of land and  25 vehicles, 20 thousand residents, over 2 thousand members of the Defense Forces and over 400 agricultural experts took part in the effort to control the invasion.

Indicating that the preparation made coupled with the training program organized have significantly contributed in the effort, Mr. Asrat commended the strong participation of all stakeholders.

The Governor of the Central region, Mr. Fesehaye Haile on his part said that the desert locust is still being observed in neighboring countries and called on all stakeholders to stay vigilant and report to nearby authorities in case of observing any eventuality.