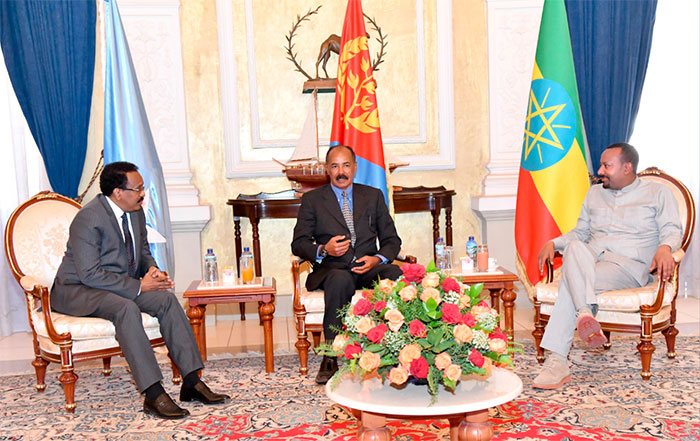 *Editor’s note: Around the world, 2020 has been turbulent, challenging, and a year truly unlike any other. This article, reviewing the period from January to April, is the first in a three-part series that looks back at some of the important events and developments that unfolded in Eritrea over the past year. Parts II and III will be published in subsequent editions of Eritrea Profile.

The first month of 2020 in Eritrea began like other years, with festivities. In Asmara, colorful cultural and musical performances were held at Cinema Roma on New Year’s Eve. President Isaias Afwerki also made a public statement conveying his best wishes to Eritreans for the year ahead.

A week later, Christmas celebrations took place across the country. In Gahtelay, a large celebration, with performances by the “Rim Stars” and other renowned artists, was organized. It was attended by throngs of locals, as well as government officials. His Holiness Abune Petros, Archbishop of the Eritrean Tewahdo Orthodox Church, also gave benediction. In his sermon, he wished peace and prosperity for Eritrea and he called on citiznes to support the disadvantaged.

On 20 January, Epiphany (Timket) was celebrated nationwide. A number of religious leaders, government officials, and thousands of the faithful took part in the religious observance conducted at Asmara’s Bahti Meskerem Square. As part of the event, a prayer service led by His Holiness Abune and His Holiness Abune Lukas, Secretary General of the Holy Synod, was conducted at the Epiphany Holy Water site.

In addition to these celebrations, the Chinese Embassy in Eritrea celebrated the Spring Festival heralding Chinese New Year on 18 January, while on 26 January the Indian Embassy in Eritrea celebrated the 70th anniversary of Republic Day at the Asmara Palace Hotel. Both events featured artistic entertainment programs and were attended by ministers and high ranking officials, among others.

The month also saw several education-related events. These included: a workshop in Asmara delivered by the Department of Environment on waste management and environmental conservation, the completion of a three-month long vocational training program for civil servants and students in Mendefera, and the completion of a six-month vocational training program for youth in Segeneiti sub-zone.

In terms of development, a newly-constructed school in Gedem- Lahzen administrative area, Foro sub-zone, opened its doors, while Harat Transportation Company opened a new route connecting Teseney with Adibara. As well, construction and maintenance activities were begun on several roads in the Gash Barka region.

Several significant local meetings were conducted during January, including the annual assessment meeting of the Eritrean Police’s, held 9-10 January in Asmara. The meeting, which reviewed the past year’s activities on crime prevention, public cooperation, traffic safety, and other issues, as well as established an annual action plan, was attended by high-ranking police officers and commanders. The Eritrean Medical Association, comprising over 180 members, held its 25th Congress on 18 January at the Asmara Palace Hotel. Research papers were presented and extensive discussions were held. The following week, on 25 January, the College of Medicine and Health Science announced it would soon commence post-graduate studies. The announcement came during a ceremony at the Asmara Palace Hotel, attended by Amina Nurhussen, Minister of Health, Presidential Adviser Yemane Gebreab, and experts from the Buffet Foundation.

Regional leaders also visited Eritrea. On 10-11 January, Mohamed Abdullahi Mohamed, President of the Federal Republic of Somalia, visited Asmara and held discussions with President Isaias about the progress of bilateral ties and regional issues of vital interest to both countries. Upon conclusion of the visit, the two leaders released a joint communiqué that, inter alia, expressed their satisfaction with the robust growth in cooperation since the signing of the Joint Declaration on Friendship and Comprehensive Cooperation on 29 July 2018 in Asmara.

Weeks later, on 27 January, President Isaias, Prime Minister Dr. Abiy Ahmed of the Federal Democratic Republic of Ethiopia, and President Mohamed held meetings in Asmara focusing on developing relations and cooperation between their countries. The meetings concluded with the leaders issuing a joint communiqué which, among other things, reaffirmed their commitment to the Tripartite Agreement signed in September 2018.

Regarding development, a new health station in Adi-Nifas administrative area, Akria sub-zone, was inaugurated on 2 February and opened for health service. The seven room health station aims to support women and children’s health. As well, in Mai-Aini sub-zone, over 500 residents conducted a community campaign to renovate a 20-km dirt road linking Mai-Aini with Adi-Bari. Nationally, control operations against desert locusts remained ongoing. Additionally, on 6 February, the International Day of Zero Tolerance for FGM was observed. A large event was held in Barentu, attended by locals, government officials, health authorities, religious leaders, and representatives of international organizations.

Education-related activities also occurred. In the capital, Asmara Comprehensive High School held a ceremony to award students that excelled in the 2018/2019 national examinations. In total, 19 students received awards. Meanwhile, in Dekemhare sub-zone, an extended vocational training program for 350 young females was concluded. As well, in the Anseba region, multi-day workshops, organized by the National Union of Eritrean Youth and Students, were provided for 50 young women and 100 high school students. Training workshops were also completed at the Ministry of Health and the Ministry of Energy and Mining.

On 7 and 9 February, President Isaias gave an extensive interview regarding domestic and regional issues. Later, on 17 February, he travelled to Saudi Arabia for a three-day working visit. During his visit, he met with King Salman, Crown Prince Mohammed bin Salman bin Abdulaziz, and other Saudi officials.

Eritrea also took part in several regional and global gatherings during the month. At the African Union (AU), delegations participated in the 33rd AU Summit of Heads of State and Government, held from 9-10 February, as well in the 36th meeting of the Executive Ministerial Council of AU Member States, held from 6-8 February. Eritrean delegations also attended the 10th Session of World Urban Forum, in Abu Dhabi, from 8-13 February, and the 75th Regular Convention on the Elimination of All Forms of Discrimination against Women, held on 14 February in Geneva.

The third month of 2020 began with the exciting announcement that during archeological excavation in the Gelalo sub-zone, Northern Red Sea region, fossils believed to be approximately one million-years-old were discovered. The discovery was part of the “Engel’ela-Ramud Project”.

In terms of training and education, the Ministry of Tourism in the Northern Red Sea region organized a training workshop for those working in service provision institutions. Weeks later, the annual National School Leaving Examination commenced, with thousands sitting for exams.

In connection with International Women’s Day (8 March) several events were conducted. The National Union of Eritrean Women branch in the Central region organized a seminar for women from various sub-zones and ministries, while in Asmara, celebrations were held at the Expo Compound. Eritrean communities abroad also staged events to mark the special occasion.

Notably, the Eritrean National War-Disabled Veterans’ Association received material support from its branches in Germany and Sweden. Remarkably, the two branches donated medical and transport materials worth over 620,000 euros.

Of course, March will go down as the month that COVID-19 entered Eritrea. The country reported its first case on 21 March, a 39-year old Eritrean national arriving from Europe, making it one of the last countries on the continent to have a confirmed case. Throughout the month, a number of guidelines and public health and safety measures were put in place in order to prevent the spread of the virus.

The month began with the implementation of a nationwide lockdown on 2 April. Initially to last for 21 days, the lockdown was subsequently extended due to the continued threat. Exemptions were made for several sectors, allowing operations to continue with reduced hours and strict compliance with standard preventive measures (e.g., fisheries, household and commercial farms, banking and financial services, food supply chains, freight trucks, and vital transportation).

In a message to the nation on 18 April, President Isaias stressed that it was incumbent on all to work hard and in tandem to fight the pandemic. On the same day, in connection with Easter, His Holiness Abune Petros gave benediction, urged all faithful to adhere to national safety guidelines, reminded citizens to support the disadvantaged, and expressed his wishes for the health of all. Similar messages were also made by leaders from other faith groups in the country throughout the period.

Eritreans coming together during the period was an eloquent testimony of the country’s rich culture of compassion and solidarity. Health workers, volunteers, the Eritrean Defense Forces (EDF), and others worked tirelessly and selflessly to protect the nation. Illustrating high levels of social cohesion, solidarity, and trust, Eritreans from all socio-economic backgrounds and living in the country or abroad enthusiastically responded during the nation’s critical time of need, generously contributing money, precious resources, and other forms of assistance. Throughout the country, workplaces, neighborhoods, and communities, utilizing deeply-rooted traditional forms of mutual assistance and collective support, also strived to ensure that no one, particularly the elderly, single-headed households, disabled, unemployed, and other vulnerable populations, was forgotten or otherwise left behind during the difficult and uncertain period. 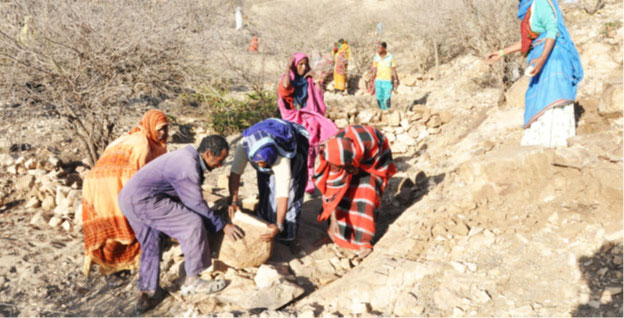 While battling COVID-19, Eritrea remained active in other areas. Different regions of the country saw preventative and response activities against desert locusts, conducted by local communities, agricultural experts, and members of the EDF. Additionally, construction and preparation of several health and education facilities continued in Halhal, Asmat, and Habero sub-zones, Anseba region.