Marriage is not a Private Affair 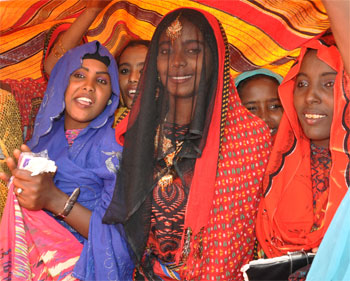 The famous Nigerian novelist, Chinua Achebe, has a short story titled, “Marriage is a Private Affair”, which describes the conflict that arises out of the antagonistic conceptions a son and his father ascribe to marriage and how it should be conducted. The father, a Christian Nigerian, tries to convince his son, a modern-minded young man, why he (the son) should not marry a young woman, whom he (the father) didn’t approve of. The son thinks it is not his father’s business to decide who he (the son) should marry.

A marriage related conflict often surfaces in Eritrean families, between young men and their parents, though the nature of the arguments are a little different from the arguments of the fictional characters of Mr. Achebe.

In Eritrea, marriage is a family affair, and never a private matter, as the young man in Mr. Achebe’s story wishes to believe, and no young people can get married without involving their families.

The argument a young man has with his parents begins when they start thinking that he has reached a marriageable age, and they try to talk to him into getting married and start a family of his own. The young man wishes to think differently, and argues back, and that they are rushing him through his life. The parents argue that he is past marriageable age and that there is no reason why he should wait.

“You have become a man. Now, what are you waiting for? Do you want to grow horns on your head?” the father asks his son. “Now, I want to hug your children,” the mother pleads with her son, and tries to show him that his wedding ushers in her happiness: “My only wish now is to see you wed: Abebekha kirii delye aloKhu” (I want to see your happiness).

Fully aware of the financial implications, the young man wants to have a little more time to prepare. Parents, on the other hand, do not want to give him more time. They want to see him married, start his own family, and in turn, raise his own children immediately, if he can. In their own words, they want “to see his light and bloom,” and kiss their grandchildren.

Many young men wish to establish their families on solid economic ground. They wish to live differently from the way their parents did. In fact, acutely aware of the kind of life they want to live, they wish to have smaller families than their parents had. They want to give their children the best life, the best education, and the best of everything, including playthings, which their parents think trivial.

Thirty or forty years ago, Eritrean families were much bigger and included between eight and ten children. This was the norm or the rule. A family of five or six children was an exception. Now, a family of four children (or even smaller) is the rule, and a family of eight or more is an exception. In short, young people these days wish to save money, which they do not want to spend on extravagant weddings, but on building a strong family.

Young men have a point in attempting to save money because a wedding is an expensive thing in Eritrea. The groom is expected to buy his bride wedding clothes and jewellery, including a golden necklace, golden earrings, and even bracelets, which cost a lot of money. It is true the groom recovers much of his expenses spent on jewellery and clothing because his in-laws take his expenses into account when he receives dowry, which often covers these expenses and more. However, there are other expenses that young couples have to bear on their own. In towns, the newlyweds have to rent at least a room of their own for the honeymoon and their life afterwards, which costs money, and which he has to cover on his own.

Eritreans do not consider a music-less wedding as a perfect one. They do not see any difference between such a wedding and a mourning. For this reason, one of the first things whose availability they make sure of is a CD player. “Why has the tent gone so quiet like a funeral tent?” people say of a quiet wedding. A normal Eritrean wedding is never quiet, and often is very noisy. Most weddings hire music bands or, at least, a vocalist, and these charge a lot of money.

Young people are keenly aware of such expenses, and do not want to spend money on things that may negatively affect their future lives, even though it is the parents who pay the bill. The conceptions of a perfect wedding of many young people is one that doesn’t hurt their cash and is carried out with less expenses. “The less expensive, the better” is their motto.

“Why spend so much money on such things?” they argue with their parents. “It could help me and my wife start our life on a solid beginning.”

“Now, you are still under me and this is my money,” the father replies, if he (the father) wants to put an end to such discussions, and wants no more of such arguments. “I wish to spend it the way I please. You do as you please with your money once you start your own family.”

The parents have a different conception of a perfect wedding. It is one in which everyone — family, the community — shares the joy, but one that doesn’t take the future married life of the couple into account. In the Tigrigna, for example, in the eyes of most parents a wedding is such a happy occasion in which everyone makes his or her contributions, as he shares in its joy.

Eritrean wedding invitation cards, which are issued in the name of the parents, or the groom’s or the bride’s family, capture the communal nature of our weddings best. A common invitation card, which expresses the parents’ wishes, goes as follows: “Ato So and So and his wife, Weizero So and So, invite the company of Ato or Weizero So and So in the day of berhanan abebanan on Such and Such Day at Such and Such place.” Berhanan abebanan literally means our light and bloom. That is the hosts’ light and bloom. 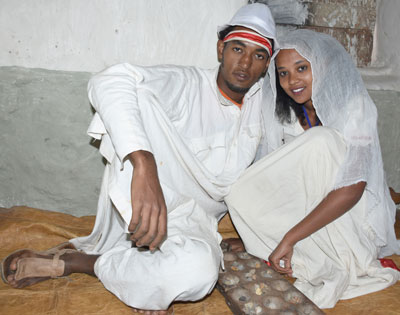 Marriage is a family affair in other ways, and is conducted according to the custom of the community the couple live in. Young people who found each other have to inform their intentions of getting married and who they have chosen as their life-partners to their parents, and through them, the community.

Though a couple could go to the municipality and have a civil-marriage, the young man and woman choose to get married in the customary way. The man convinces his parents of his choice and asks his parents to send a shimagile, comprising his close relatives, who visit the bride-to-be’s family and formally ask for their daughters’ hand in marriage. They prefer traditional weddings because they automatically grant the couple the consent or blessing of both families, and the acceptance of the community. Love-marriages, in which couples may marry partners of their choices without the consent or blessing of their parents are very rare.

In the Achebe story, the young man marries the woman of his choice, and as a result forfeits the acceptance of his father, who is estranged from him for many years. Such estrangement between young Eritrean newlyweds and their parents do occur, but are very rare. Now, parents have become more understanding, and give their children free-rein in matters related to their (their children’s) married life.