There was a perception that building dams in the eastern and western lowlands of Eritrea is hardly possible. The big concern was that large streams of water from highlands would inundate the embankments while sediments would shorten the dams’ life. What is more, many argued that building dams in an arid region would not be effective as a large amount of water would evaporate due to the hot climate.

But emphasizing the strategic importance of building dams in the eastern and western lowlands of Eritrea, Eng. Dawit Berhane, Projects Hydrologist at Segen Construction Company, said, “Every drop of water matters to the normal livelihood of Eritreans residing in the eastern and western lowlands of the country. For them, a drop of water is the very means of their survival in such an arid zone.”

Eritrea’s vision of ensuring food security is realized through the development of large scale agricultural undertakings, and the western lowland has been chosen for this purpose because it is endowed with large and fertile agricultural plains. After the scoping and planning of water development projects in Gash- Barka were made suitable sites for the construction of the dams were selected.

As the capital invested in building dams needs to correspond with the envisaged output, the economic development of water resources was the main point considered before and during the construction of the dams. In this regard, Eng. Michael said: “Cautious ground works were undertaken to ensure longer life of the dams while suitable sites were identified to minimize the operational expenses as much as possible.”

Eng. Tesfazghi believes earth-fill dams are more suitable than concrete and masonry dams in areas that have large catchment areas. Since earth-fill dams are constructed using soil, the cost of construction is a lot lower. It is unavoidable that earth-fill dams are prone to loss of water due to leakage from fractures and that sedimentation decreases the storage capacity of the dams. Eng. Michael Ghebrehiwet, head of Design and Infrastructural Works at Segen Construction Company, said rivers have been diverted to absorb as much silt as possible before the water streams get impounded in the reservoir and check dams, terraces and drainage structures have been constructed to prevent large volumes of silt from entering the dam.

After the paper work for the construction of the dams was completed, the ground work proved to be more challenging. At times, Eng. Michael said, workers were obliged to work from ten to sixteen hours and more in the construction of the dams. The Regional administration, local communities and members of the Defense Forces participated particularly in the stone riprap works at the top section of the dams. Managers, engineers and other experts in dam construction had to stay day and night at the work site to make sure that risks are avoided or minimized to the lowest possible level.

Sharing his views regarding the challenges encountered and the experiences gained from prior construction engagements, Eng. Tesfazghi underscored that it was an exclusive opportunity that boosts the company’s confidence in implementing much bigger tasks. Such an opportunity was a turning point which enabled the company to move forward.

All development undertakings in Eritrea are done by the people and for the people, and the active participation of local communities has been crucial in completing the setout programs with efficiency and within the planned time frame. For this reason, Eng. Michael expresses his appreciation to the residents of Teseney, Haykota and Goluj sub-zones for their commitment throughout the construction period of the dams.

Segen Construction Company had gained experience in building smaller dams in the highlands before it moved to the lowland to build bigger dams. For the last 15 years, starting from the time it moved to Gherset, it has been making efforts to balance the challenges with opportunities. Eng. Dawit said the company has been adhering to the principle of “minimizing challenges and maximizing any available opportunity.” For instance, the human resource capacity has been growing steadily as increased exposure to challenging tasks have been creating opportunities for honing and transferring skills of those engaged in the construction of the dams.

To overcome natural challenges such as floods during rainy seasons the company had to make temporary diversion canals. At times, Eng. Tesfazghi said, structures built to support the dam unexpectedly get inundated with abundant water streams, further extending the original volume of work.
The experiences gained by Segen Construction Company have been instrumental in moving Eritrea as a county forward, from making earth-fill dams to making concrete dams. Emphasizing its implication for Eritrea as a future regional player in construction, Eng. Dawit said, “The human resource capacity built during the construction of the dams played a crucial role in the construction of mining projects and roads, making the company more competitive at regional level,”

Mr. Getachew Merhatsion, Director of Eritrean Mapping and Information Center, said that Fanko-Rawi, which was constructed as a supplement to Fanko-Tsumu’e, has a storage capacity of 20 million cubic meter of water. At present, 2000 to 3000 hectares of land is under cultivation using water from Fanko-Rawi while water from Fanko-Tsume, which can hold up to 14 million cubic meter of water, is being used for the cultivation of vegetables. 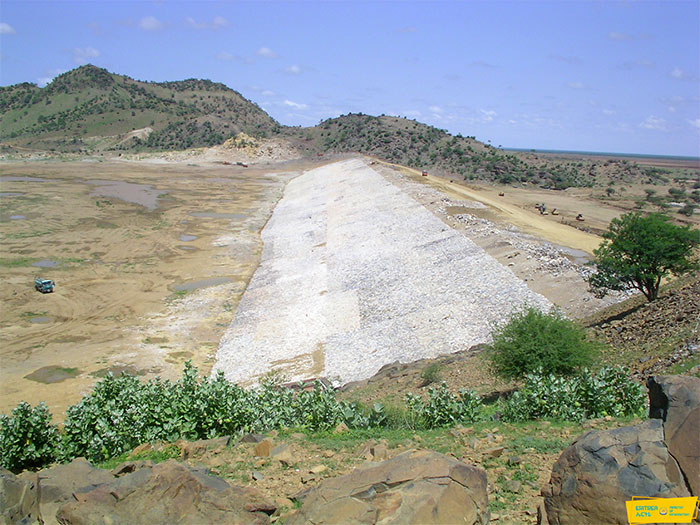 The expertise gained in the construction of earth-fill dams was a stepping stone for the construction of major concrete and rock-fill dams in the Gash- Barka region and in the highlands such as Kerkebet, Mslam and Logo dams and other dams under construction. “The experiences we gained and the challenges we faced have been quite helpful for better accomplishment and judicious utilization of resources, with more economic irrigation technology now in demand,” Eng. Dawit said.

In his final remarks about the actions that need to be taken to ensure the sustainability of the dams, Eng. Tesfazghi said that constant inspection should be made to determine the status of the dams and to ensure that the dams are operating in a safe manner, and regular inspection of spillways needs to be done to ensure a dam is not blocked by logs or trees growing near its embankment. He emphasized that the highest plant growth that should be allowed on a dam’s embankment should not be more than pasture grass to serve as protection against erosion.

Marriage is not a Private Affair