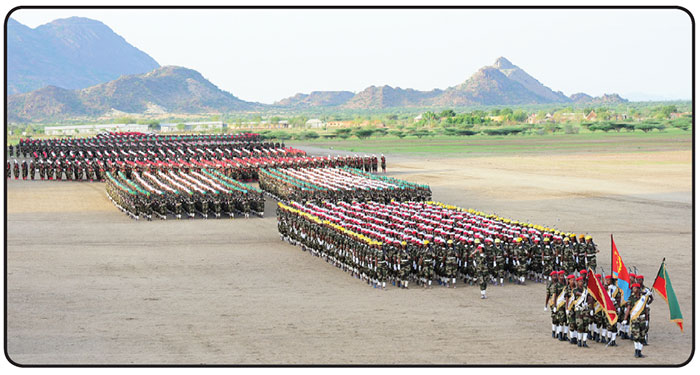 *Editor’s note: Around the world, 2020 has been turbulent, challenging, and a year truly unlike any other. This article, reviewing the period from May to August, is the second in a three-part series that looks back at some of the important events and developments that unfolded in Eritrea over the past year. Part I was published in the last edition of Eritrea Profile, while Part III will be featured next week.

The month began with International Workers’ Day (1 May) commemorated in Asmara. Events saw 40 members of the National Confederation of Eritrean Workers (NCEW) donate blood at the National Blood Transfusion Center. Additionally, Tekeste Baire, Secretary General of the National Confederation of Eritrean Workers, released a statement that, inter alia, declared the NCEW would continue to extend financial and material support to the national efforts to contain the virus.

Days later, on 3 May, President Isaias Afwerki headed to Ethiopia for a two-day visit. During the trip, he met with Dr. Abiy Ahmed, Prime Minister of the Federal Democratic Republic of Ethiopia. The two leaders discussed bilateral ties, the fight against COVID-19, combating the regional locust infestation, and other regional matters. President Isaias was accompanied by Foreign Minister Osman Saleh and Presidential Adviser Yemane Gebreab, while Ethiopian officials the Eritrean delegation visited and met with during the trip included Sahlework Zewde, President of the Federal Democratic Republic of Ethiopia, former Ethiopian Prime Minister, Hailemariam Desalegn, Shimeles Abdissa, President of the Oromia Region, Gedu Andargachew, Minister of Foreign Affairs of Ethiopia, and Sileshi Bekele, Minister of Water, Irrigation, and Energy. Remaining with diplomacy, May also saw FM Osman Saleh and Presidential Adviser Yemane Gebreab head to Khartoum. There they met with President of the Sovereign Council, Lt. General Abdel-Fattah Al-Burhan, and delivered a letter from President Isaias. The Eritrean delegation also met with the First Vice President of the Sovereign Council, Mohammed Hamdan Deglo, and Prime Minister Abdalla Hamdock. Discussions focused on bilateral ties and regional cooperation.

Of course, May is special on the annual calendar because it is the month in which our beloved independence day falls. While COVID-19 meant that the usual festivities were considerably toned down, the pride and happiness of Eritreans, at home and abroad, remained strong. In Asmara, The 29th anniversary of the special day was celebrated enthusiastically at a ceremony at Cinema Roma. As well, Eritrean communities in cities around the world organized colorful, artistic programs. At a ceremony conducted in Addis Ababa, attended by staff members of the Eritrean Embassy and Permanent  Representative of Eritrea at the Commission of the African Union, Ambassadors Semere Russom and Araia Desta congratulated the Eritrean people and the Eritrean Defense Forces (EDF).

Notably, in an address to the nation on 24 May, President Isaias also extended his congratulations to the Eritrean people, called on all to adhere to COVID-19 safety guidelines, and expressed his gratitude to those who were working to combat the virus and protect the nation. Notably, leaders of dozens of countries sent messages of congratulations to the people and Government of Eritrea.

On the COVID-19 front, on 15 May, the Ministry of Health announced that all 39 confirmed cases in the country had recovered fully. Two days later, Eritrea launched a random and extensive testing program to comprehensively gauge the spread of COVID-19. The first phase focused on parts of Asmara, towns and villages in border areas, as well as front-line employees in the Ministry of Health and other relevant institutions.

While COVID-19 was understandably the key focus, development-related activities continued. The National Agricultural Research Institute announced that preliminary trials to introduce liquid fertilizer for farming produced positive results. Further trials were begun with the long-term aim of distributing liquid fertilizers to local farmers. As well, in the Ribda and Alet administrative areas of Forto Sawa sub-zone, it was announced that the construction of two new elementary schools was nearing completion. The new schools will help improve enrolment and attendance in the region, particularly for the rural and nomadic populations.

On 2 June, Eritrea completed the first phase of extensive random testing. Final results showed that one single person tested positive for COVID-19. Subsequently, all immediate and indirect contacts of the patient were promptly traced and quarantined. While results were highly encouraging, citizens were urged to maintain the commendable commitment and adherence to the safety guidelines in order to ensure continued success. As well, schools were partially reopened, while other restrictions were eased slightly. 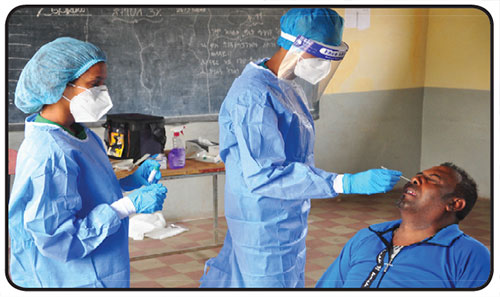 The month of June sees several important international days related to development and the environment . These are, of course, two areas of critical importance for Eritrea. Accordingly, on 5 June, the Ministry of Land, Water and Environment called for reinforced water, soil and environmental conservation. As well, on 17 June, the World Day to Combat Desertification and Drought, the Ministry of Agriculture called for promoting community-based agricultural activities in order to improve productivity.
Several important development-related events also took place. In Maret administrative area, Nakfa sub-zone, a new dam with 70,000 cubic meter capacity and cost of 3 million Nakfa had progressed to about 25% completion. Meanwhile, the Ministry of Agriculture continued preparations to modernize and expand honey production and marketization as part of the Minimum Integrated Household Agricultural Package. Other activities included: residents of Foro sub-zone and Dubarwa sub-zone conducting water and soil conservation popular campaigns, and residents of Nakfa helping to lay 8-km of water pipelines and construct two water reservoirs.

Eritrea also continued to battle desert locusts. Intensive surveillance and control measures were undertaken to deal with threats in winter breeding areas and from invasion from neighboring countries. The response involved officials from various ministries, local administrative and community leaders, citizens, and members of the EDF. 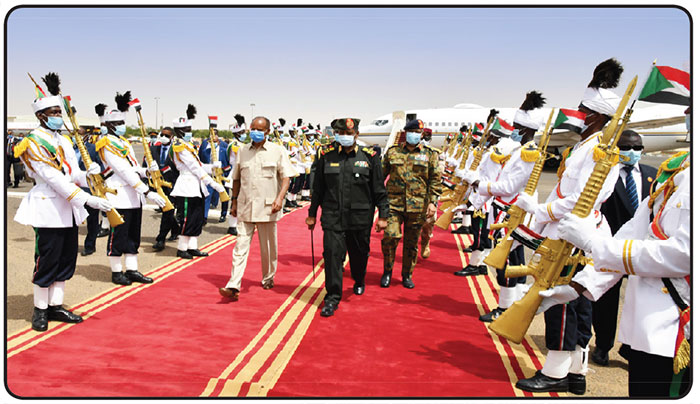 June featured a number of diplomatic activities. On 11 June, Elsa Haile, Director of International Organizations at Eritrea’s Ministry of Foreign Affairs, delivered a statement at the virtual Meeting of National Focal Points of LDCs in Africa. Her comments outlined Eritrea’s response to COVID-19 and expressed solidarity in the global fight against the virus. Weeks later, on 25 June, President Isaias conducted a three-day visit to Sudan. There, he held extensive discussions with General Abdel Fatah Al Burhan, Prime Minister Abdullah Hamdok, and Lt. General Mohammed Hamdan Dagalo, on strengthening bilateral relations and regional issues. During the visit, President Isaias was accompanied by FM Osman Saleh, Yemane Gebreab, Presidential Adviser, and Ibrahim Idris, Charge d’Affairs at the Eritrean Embassy in Sudan. Also in late June, the executive committees of Eritrean national and community organizations in 15 cities in Italy, including PFDJ, YPFDJ, and the National Union of Eritrean Women, conducted a virtual meeting. During the meeting, in which Dr. Fesehatsion Petros, Eritrean Ambassador to Italy, and Ghirmai Habtemicael, Head of Public and Community Affairs took part, extensive discussions were conducted on organizational progress and challenges.

One of the most important days on the Eritrean calendar – 20 June – was commemorated across the country and by Eritreans around the world. On 19 June, Eritreans held a candlelight vigil, while early the following morning, President Isaias laid a wreath at the Patriots Cemetery in Asmara in tribute of those who fell to bring independence and safeguard sovereignty. Similar events were held at other cemeteries across the country, and at midday a national minute of silence was observed.

The first week of July saw President Isaias head to Egypt for a three-day working visit. During the trip from 5-7 July, he held meetings with President Abdel Fatah Al Sisi and other Egyptian officials on bilateral and regional issues of interest to the two countries. President Isaias was accompanied by FM Osman Saleh, Presidential Adviser Yemane Gebreab, and Ambassador Fasil Gebreselasie.

Less than two weeks later, on 18 July, Dr. Abiy Ahmed, Prime Minister of the Federal Democratic Republic of Ethiopia, arrived in Asmara. During his two-day visit, in which he was accompanied by Ambassador Redwan Hussein and Speaker of Parliament, Tagesse Chaffo, the PM met with President Isaias to discuss strengthening bilateral and cooperation. Dr. Abiy also toured various development projects in Eritrea and observed rehearsals for the graduation parade of the 33rd Round of the National Service. 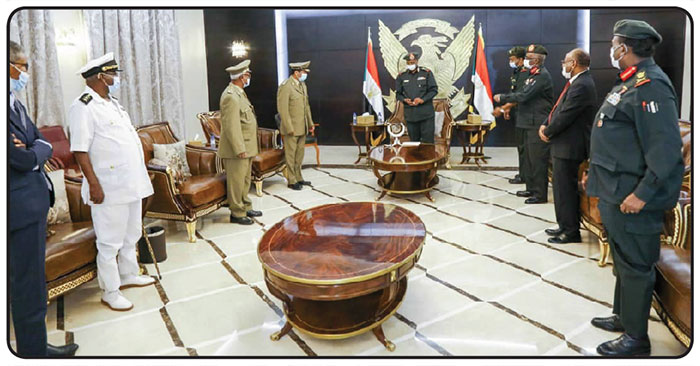 Shortly after, on 20 July, an Eritrean military delegation headed by General Philipos Woldeyohannes, Chief of Staff of the Eritrean Defense Forces, delivered a message from President Isaias to General Abdul Fattah Al Burhan, President of the Sudanese Sovereign Council. General Abdul Fattah said the visit of the delegation reflected the strong relations between the two countries and thanked Eritrea for its support during Sudan’s challenging transition period. The following day, the Eritrean delegation met and held talks with First Deputy Chairman of the Sovereign Council of Sudan, Lt. General Mohamed Hamdan Dagalo on enhancement of bilateral cooperation in defense and security issues.

In terms of development, on 15-16 July, Amina Nurhusein, Minister of Health, accompanied by the Governor of the Northern Red Sea region, Asmeret Abraha, conducted a tour of inspection of health facilities in the towns of Kelhamet and Afabet, Afabet sub-zone. The two officials held discussions with local health officials and administrators. As well, in response to continued threats posed by desert locusts, on 14 July workshops were organized for members of the Ministry of Agriculture and the EDF in Mendefera, while in Anseba, water and soil conservation activities were conducted by residents and EDF members. Meanwhile, in Asmara, members of the first round of national service, the Bulletin Committee of CBSS in Adi Keih, and members of the National Union of Eritrean Women gathered to donate blood at the National Blood Bank. Throughout the month, residents of Habero sub-zone, in cooperation with the EDF, worked to renovated roads damaged by flooding. 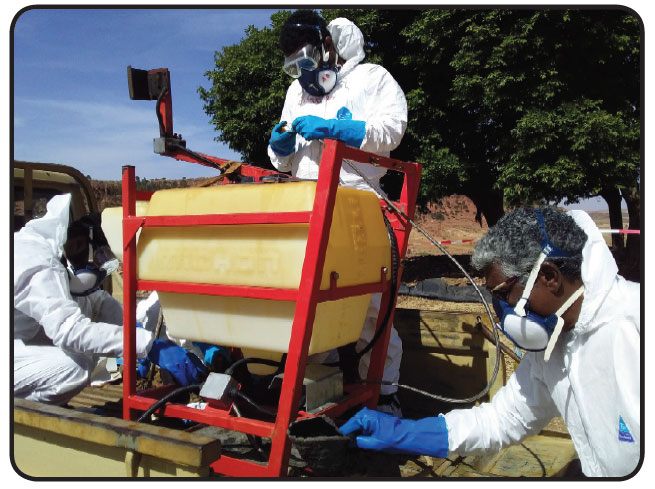 One of the most important days this past year took place on 15 August, when the ceremonies for the graduation of the 33rd Round of National Service and the 11th commencement of the Vocational Training Center took place. Held in Sawa, the celebrations were attended by President Isaias, various high-level officials, and military commanders. In his address to graduates, President Isaias commended the efforts of students during a particularly challenging year.

Meanwhile, the development-related activities during the month included: the residents of Segeneity and Emni-Haili sub-zones, Southern region conducting community-based environmental sanitation activities; residents of Adi-Keih sub-zone, Southern region, and Gala- Nefhi, Central region engaged in a community campaign to renovate roads; the villages of Misgad and Adi- Bakokay, Central region renovating roads damaged due to flooding; and the inauguration of two micro-dams in the sub-zones of Gala-Nefhi and Serejeka. Last, in connection with International Youth Day, on 11 and 12 August students from the National Union of Eritrean Youth and Students conducted a blood drive to donate to the National Voluntary Blood Donors Association.

Significantly, the battles against COVID-19 and desert locusts continued apace. Regarding COVID-19, despite the arrival of many people at various land and sea borders, infections were contained, while communities and the EDF worked together to minimize destruction caused by desert locusts. 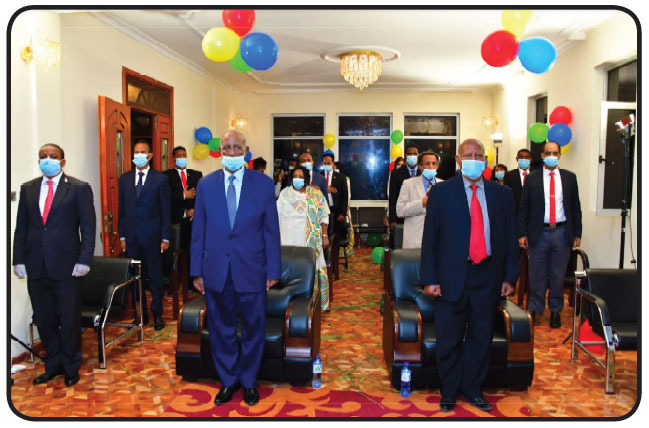 Finally, Eritrean communities around the world conducted festivals. While events and festivities were modified and toned down due to the COVID-19 global pandemic, Eritreans were still able to showcase their deep passion for and commitment to their country.

Every Day I am learning to swim in the vast oceans of brand new ideas. Editor, Cinematographer, Abel Haile ( A2)